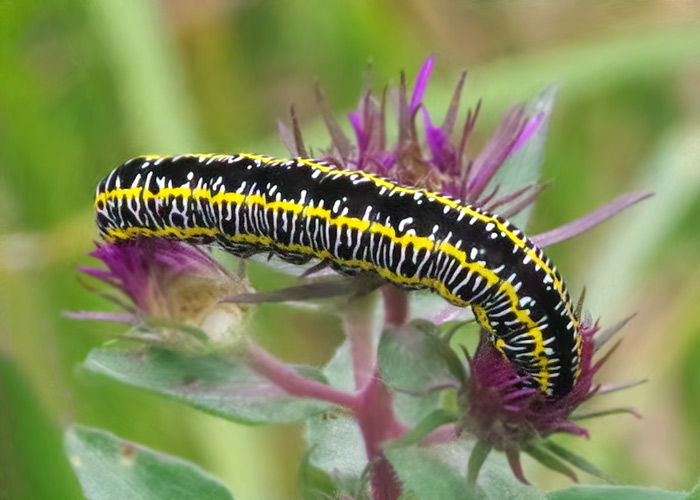 There’s a saying among lepidopterists that the more handsome the caterpillar, the drabber the moth. Without getting all judgy here, today’s bug seems to bear that out.

The BugLady photographed these beautiful caterpillars on a cold and blustery day at the start of October, a day when nearby New England asters were topped by sluggish bumblebees (bumblebees are sometimes called, only half-jokingly, a “warm-blooded bees”). The caterpillars weren’t too active, either. They’re called Zebra Caterpillars (of course!), the larva of the Zebra caterpillar moth, a.k.a. Zebra Arches (Melanchra picta), a moth named for its caterpillar. It’s in the Owlet moth family Noctuidae, and it’s found in grasslands, gardens, and disturbed areas across North America, mostly north of the Mason-Dixon Line.

The caterpillars feed toward the end of the growing season on an array of plants, from alfalfa to willow, and because many of their hosts are cultivated crops, they are considered pests in some areas. Females lay their eggs in masses; caterpillars are gregarious leaf skeletonizers in their early stages, but they become solitary as they get older. Adults have a long flight period, and both adults and caterpillars are abroad throughout the summer and into fall. They overwinter as pupae in chambers in the soil. When the caterpillars are alarmed, they roll up into a ball and drop off the leaf. 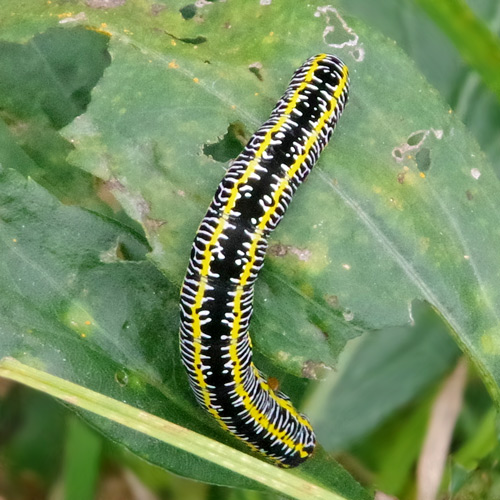 In some areas of the Northwest, the larvae can be numerous enough to be crop pests; in the East, they can be hard to find. One suspect is a tachinid fly that was introduced to control the introduced Gypsy moth but that took a liking to native moths, too. In a paper called “Moth Decline in the Northeastern United States” published in the News of the Lepidopterists Society in 2012, David Wagner states that “I am unaware of any sightings of the zebra caterpillar (Melanchra picta) in more than 10 years.”

The Zebra caterpillar moth was first described in 1841 by Thaddeus William Harris (1795 to 1856), another of our early entomologists/naturalists who started his life as a physician and who later excelled in a number of fields.

Harris practiced medicine, was a botanist (he was once beaten in an application for a faculty job at Harvard College by the famous botanist Asa Gray) and an entomologist (he compiled the first systematic listing of American insects, and he eventually specialized on moths). He worked as the Harvard librarian, where he lectured on natural history (to Henry David Thoreau, among others!), started the Harvard Natural History Society, and co-founded the Massachusetts Horticultural Society. Along the way, he established himself as the founder of applied entomology because of his Report on the Insects of Massachusetts, Injurious to Vegetation (1841). And he had a dozen kids.