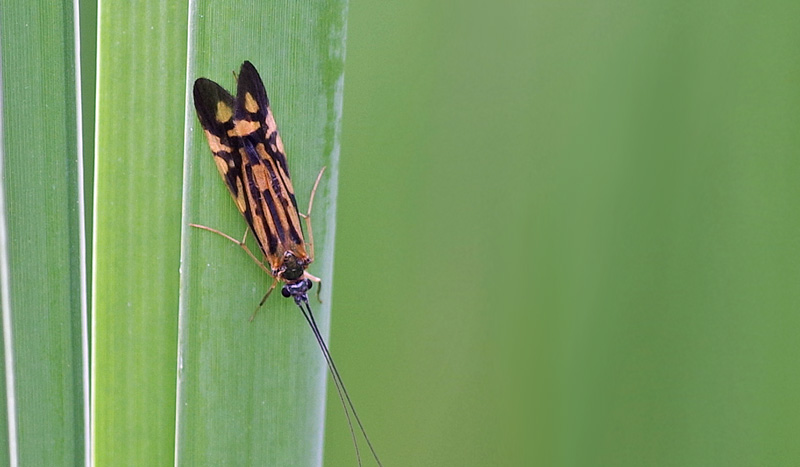 Another week, another zebra.

The BugLady had fun chasing this dynamite little insect along the banks of the Milwaukee River at Waubedonia Park in mid-summer (it likes to perch on the undersides of leaves). She had never seen one before, but after a few false starts, she discovered that it’s a Zebra Caddisfly (Macrostemum zebratum) (aka Macronema zebratum or Macronemum zebratum, depending on whose book you read), and that it’s considered pretty common. She had to adjust her mind set about what she had considered a pretty dowdy group. For some basic Caddisfly facts and an explanation of the origin of their name, see this previous BOTW featuring the Caddisfly.

Many of the internet hits for caddisflies come from the trout-fishing community, where adult caddisflies are often called “sedges.”

ZCs are in the caddisfly Order Trichoptera (“hairy wings”), and in the Net-spinning caddisfly family Hydropsychidae which, according to bugguide.net, means “water nymph.” Hydropsychid larvae are found in rivers and streams across North America; they are (today’s vocabulary word) “rheophilus,” (from the Greek rheos” (flow) and philus (to love)). Adults are short-lived – some species are nectar feeders as adults, but others don’t feed at all – and they’re generally found on vegetation near the larval river. 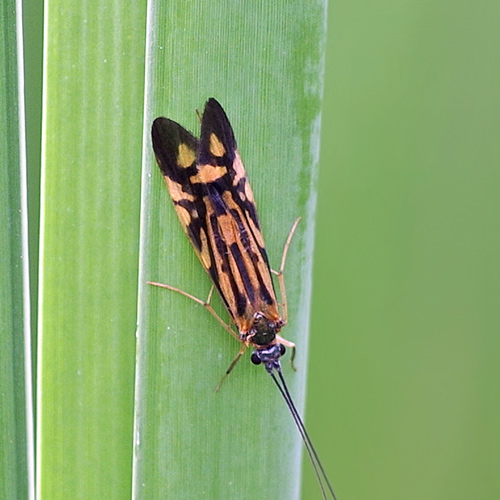 Caddisflies are famous for using available material to build tubular cases that they drag around with them (one author calls them “mobile homes”), but the Net-spinning caddisflies don’t do that. Instead, they make an immovable shelter/retreat on a submerged rock, in a crevice between rocks, in debris, or on aquatic vegetation. They spin a silk trap net nearby in order to snag the edibles that float downstream, they poke the front end of their body out of their retreat periodically to check their catch, and they keep their silken nets clean. Algae-eaters knit a fine-meshed net, and larvae that fed on larger particles make a coarser sieve. Hydropsychid larvae breathe using tufts of gills on their abdomens.

Caddisflies mate at dusk near the water’s edge. Females of some species, including the Hydropsychids, have concave, fringed legs that allow them to swim down to deposit their gel-covered egg masses (up to 800 eggs) on submerged surfaces. Other species release their eggs at the surface or attach them to plants just above the water, so the larva will fall in after hatching.

Hydropsychid larvae actively defend their small territory. Making trap webs is energy intensive so they protect them by “stridulating” (making noise by rubbing bumps on their femurs across the side of their head) to discourage wandering caddis larvae from entering. If noise doesn’t deter the intruder, physical combat ensues. 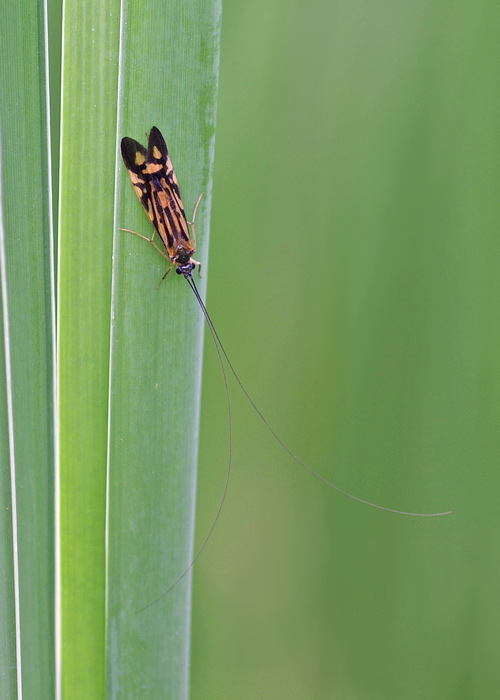 Animals that live in strong currents need adaptations to keep from being swept downstream. Net-spinning caddisflies have claws on their prolegs so they can grip the slippery rock surfaces where they live and can hold onto the inside of their shelter (prolegs are stubby, hydraulically-powered stubs on the underside of the abdomen that help the larva navigate). Even though they can hang on, caddisflies may “let go” and drift in order to find new territories, and drift can also carry eggs downstream. Waubedonia Park has had some severe floods during the past two summers, and it’s mind-boggling to think of how the strong currents that scour the river bed can uproot and redistribute aquatic species.

The ZC is a Midwestern/Eastern species that has fairly broad tolerance for fluctuating currents, temperature, and water clarity, but its habitat must contain lots of organic particles. It is not as sensitive to pollution as many of its relatives are.

ZC larvae eat algae and diatoms as well as tiny crustaceans and aquatic insects (they are omnivore-detritivores), and they are eaten by trout and smallmouth bass. Adults that have chewed their way out of their underwater pupal cases and are floating/swimming to the surface are picked off by fish, and so are adults that are resting on the surface. Fishing lore abounds with stories about big hatches and about the anglers selecting a lure that correctly “matches the hatch.” Adults are also eaten by birds, frogs, bats, spiders, and dragonflies, and the larvae are parasitized by a wasp that ventures below the surface to find them.

When fishermen meet caddisflies, the result is a lure for fly casting. To see another human/caddisfly intersection, Google “caddisfly case jewelry.”