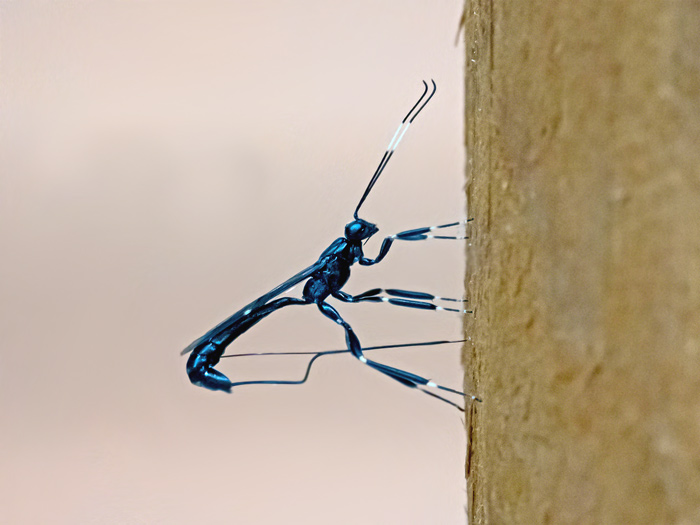 This summer, the BugLady got a “what is this?” email from BugFan Debra that contained a picture she took in northern Wisconsin of this beautiful black wasp with white spats (thanks, Debra!). The posture was reminiscent of our local Giant Ichneumon wasps, but there are only four species in that genus, and this wasn’t any of them. So, the BugLady suggested that Debra send the picture to the entomology department at UW-Madison, where almost-BugFan PJ identified it. He noted that its “dapper black & white appearance is pretty distinctive” and ID’d it as Xorides stigmapterus (no common name), an ichneumon that is related, but not super-closely, to the Giant Ichneumons and that has a similar lifestyle.

Here’s the thing about the family Ichneumonidae – it’s a huge family (60,000 species worldwide and counting) that are generally easy to recognize as Ichneumons but tricky to ID to species, and most of their larvae make their living as parasitoids – feeding in or on the living bodies of their hosts, some even using viruses to disable their host’s immune system.

Xorides genus members target the larvae of a few families of beetles, wasps, and Lepidopterans. Bugguide.net says that “Xorides stigmapterus occupies an immense geographic range from subarctic Labrador and Alaska south to Minnesota and Iowa on the west and Florida in the east.” Within that range, it favors mature woods and is a pretty picky eater; its larvae parasitize, as far as we know, only the larvae of a few Cerambycids (long-horned beetles), notably the Six-banded long-horned beetle (Dryobius sexnotatus) and Trigonarthris proxima.

Females use their antennae to sense the vibrations of beetle larvae within a tree (“antennating”) and then they use their filamentous ovipositor to deposit an egg in the chamber where its host awaits, or even on the host, itself (to this end, the egg must be semi-solid/almost liquid in order to make the journey through that slender, curved tube). The larva hatches and tunnels into its host, and its method of feeding keeps its host alive as long as the wasp larva needs fresh food.

Females are conspicuous during the 15 to 60 minutes that it takes them to discover, drill and deposit; some are picked off by predators in the process, and their ovipositors can be found sticking out of the bark.

If you Google this wasp, you won’t find a lot about its life story, but it’s such a beauty that there are a lot of hits on photo sites. There are also a lot of videos of females ovipositing, but the BugLady tries to practice safe surfing and will let BugFans track down the videos for themselves.