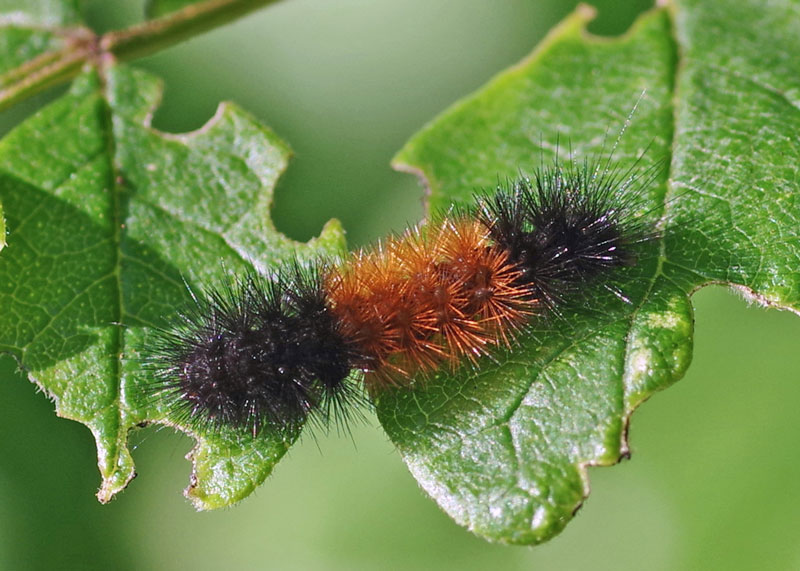 Last week’s episode was the 600th original (not rerun or tweaked) episode, and the BugLady is going to take a two-week victory lap (but she will fill the space with tasteful reruns).

The BugLady has been hanging out on the hawk tower this fall, logging migrating raptors for the Western Great Lakes Bird and Bat Observatory. We’ve counted just under 800 birds since early September, and some of the weather has been – interesting. On Sunday, the temperature was in the high 30’s (-ish), and we clocked a few wind gusts around 40mph – and got 37 birds. The BugLady was amazed to see, on the walk back to the car, a few wooly bear caterpillars crossing the mowed trail. Those little fur coats must be a lot warmer than they look.

As often happens with the moths, one life stage may be more conspicuous, and the adults and caterpillars may even have different names. In this case, the ubiquitous, rust-and-black-banded Wooly bear caterpillar turns into a lovely, less-common, caramel-colored, or cream , or yellow moth called the Isabella Tiger moth (Pyrrharctia Isabella).  Pyrrharctia is a “monotypic genus”—there’s only this single species in it—and they’re only found in North America. 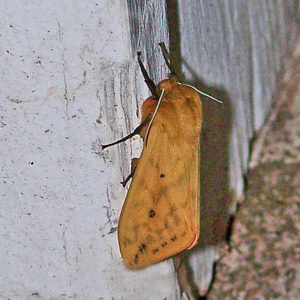 Tiger moths are in the family Erebidae, a diverse group that includes about 250 species of tiger, underwing, Zale, tussock moths, etc. in North America and many more worldwide (except Antarctica).  If you have an older insect guide, they’re in their own family, Arctiidae, but everything that was once in Arctiidae is now in subfamily Arctiinae.

Tiger moths are unusual in that they have an organ on their thorax that vibrates to produce ultrasonic sound. They “vocalize” to attract mates and to defend against predators. If you have sound-making ability, you also need “ears,” and those are on the thorax, too. Like the feline tigers, the adults of many species are hairy and sport bold color patches, stripes or patterns (consider the striking Leconte’s Haploa ).

Many tiger moth caterpillars are fuzzy, earning a group name of wooly bears or wooly worms. There is an amazing amount of information out there about wooly bear caterpillars, and much of it is contradictory, which is explained by the fact that there are many different kinds of caterpillars that are called Wooly bears.

The Isabella Tiger Moth caterpillar is called the (generic) Wooly Bear, the Black-ended Bear, and the Banded Wooly Bear. They’re not as distinctive in their early stages .

A mature female Isabella Tiger Moth “calls” to males by emitting pheromones (chemical signals) at night, and males use their sensory antennae to zero in on her . Isabella Tiger Moths lay their eggs on a wide variety of plants during the warm months. While some caterpillars are known for their picky eating, Wooly bears are generalists. They feed during the day, munching on handy, low-growing plants like grasses, “weeds,” and wildflowers. Cannibalism has also been reported. Their catholic eating habits ensure that they’re constantly surrounded by food during their autumnal wanderings in search of wintering sites. 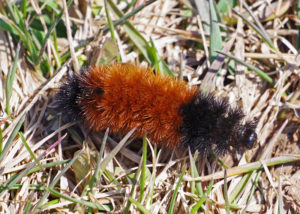 They spend the winter as caterpillars, sheltered from the weather under tree bark or debris, or in your garage. Do they become “bug-cicles?” Yes, indeed. They’ve even been found frozen into a chunk of ice. But, like other organisms that are dormant in the dead of winter, Wooly bear caterpillars produce a chemical cryoprotectant (antifreeze) that safeguards living tissue against damage from freezing and thawing.  They will stir and walk around on mild winter days and go back into hiding when the temperatures drop again. They wake up with the warm weather, resume eating, and then pupate in late spring in a fuzzy cocoon into which they incorporate their own “hairs.” According to Wikipedia, Arctic summers are so short that Arctic Wooly bears may need to live through several of them to become mature enough to pupate.

One area of disagreement among sources is whether Wooly bears’ wool/setae/hairs/bristles are irritants (remember: one common name – numerous species). Having a bristly covering discourages some predators, although in the Fieldbook of Natural History, E. L. Palmer says that “skunks and a few other animals roll hairs off the caterpillars before they eat them.” Certainly, the stiff hairs make it a harder to pick a Wooly bear up, and when you do pick one up and it curls into a defensive ball , it’s pretty slippery. Some sources say that the setae contain a stinging/irritating/venomous chemical, and other sources specifically say they do not. Still other references say the setae may cause dermatitis mechanically—that they might break off in your skin (like one of those wretched, furry cacti); and others say that that unlike many hairy caterpillars, Wooly bears are harmless. The BugLady has never suffered any ill effects from handling the familiar, rust-and-black Wooly bears.

Wooly bears have been famous since Colonial times for two things: 1) their habit of crossing the roads in fall (the BugLady wonders what they crossed before the Colonists arrived and started making roads); and 2) their alleged ability to predict the weather. 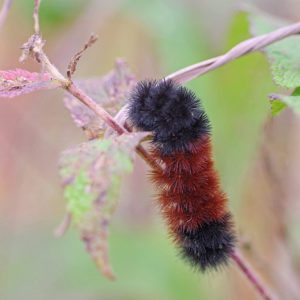 The weather lore angle was initiated by those same, road-building Colonists, who needed some forecasting done in the pre-Weather Channel days so they could figure out when to plant and harvest crops. If its rust-colored middle band is wide, says the Almanac, the winter will be a mild one; if there is lots of black, batten down the hatches. Except for a few sources say the opposite—that lots of rust means lots of cold.

A surprising number of scientists have felt obligated to leap in and deflate the weather story. To them the BugLady says “Lighten up, Party Poopers, and let a little fantasy into your lives.” They tell us that the widening middle band is a result of age; that each time a Wooly bear molts, a black band becomes a rust band (except, of course, for a few who say the opposite – that rust turns to black). So, a rustier caterpillar is an older caterpillar. The BugLady had been curious about why the early fall Wooly bears seemed more pessimistic than the later fall Wooly bears and is happy to have that one resolved. According to that school of thought, if you see a blacker caterpillar in spring, it’s one that became dormant prematurely, and so may be telling the weather of the previous fall. Other research suggests that a caterpillar with lots of rust lived in dry conditions, and one source says that a Wooly bear with wide black bands grew up where the habitat was wetter. Still other scientists say that there is considerable variation in color even within newly-hatched individuals from a single clutch of eggs, and that the variation persists as they age. 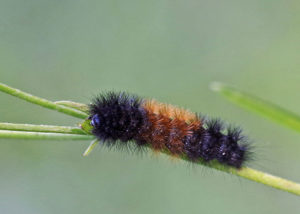 We have Dr. Curran, a curator of insects at the American Museum of Natural History, to thank for popularizing the Wooly bear. For eight years in the late 1940’s and early 1950’s, Dr. Curran drove north from New York City along the Hudson to Bear Mountain State Park to measure the coloration of the Wooly bears he found there.  During those years, the rusty bands predicted mild winters. He “leaked” the forecasts via a friend at a NYC newspaper, and the publicity his reports generated put Wooly bears on the map. But Dr. Curran’s only real hypothesis was that Scientists Just Want to Have Fun. He and his friends enjoyed the scenery, the foliage, and the caterpillars on their annual fall forays and formed “The Original Society of the Friends of the Woolly Bear.” Thirty years after Dr. Curran’s outings ceased, the folks at Bear Mountain State Park resurrected the Friends organization and the wooly bear count.

Wooly bears are embraced by children and adults alike, and Annual Wooly Bear Festivals are observed in fall (though the pandemic has shuttered many):

By the way – both “wooly” and “woolly” are accepted spellings, but in countries that are not the US, “wooly” is likely to be spelled “woolly.”