Now that it’s mid-summer, the BugLady feels sure that you can tell the Common Wood Nymphs from the Little Wood Satyrs, of previous BOTW fame, so it’s time for a few wild cards. To recap from “Wood Nymphs” Part 1—The Browns/Satyrs/Wood Nymphs (BSWNs) are anonymous grayish-brown, medium-sized butterflies in the Brushfoot butterfly group that can be challenging to identify in the field and whose taxonomy is shifting. With a wingspread of 2 ½-plus inches, the Common Wood Nymph is the largest in our area, and the Little Wood Satyr, at 1 ½ inches, is the smallest. The wings of BSWNs are decorated with bulls-eye-type eyespots. They have a “bouncy” flight. The adults generally feed on non-flower matter like rotting fruit, tree sap, dung and carrion, and the larval food plants are grasses and sedges.

Eyed Browns (Satyrodes eurydice) (there’s Eurydice, the oak nymph, again) are butterflies of swamps and marshlands and of the grassy fields that surround them. Like other wetland species, Eyed Brown populations have been affected by the draining, plowing, and/or flooding of their habitats. Besides bird droppings and plant sap, the adults nectar on the flowers of some wetland plants like Joe-Pye weed and swamp milkweed. They can sometimes be seen flying through the same areas as the look-alike Appalachian Browns (S. appalachia, not pictured here), once thought to be the same species. Both like wetlands, although Appalachian Browns prefer their wetlands with trees (swamps) and Eyed Browns prefer theirs without (marshes and wet meadows).

The Northern Pearly-eye (Enodia antheron) is another of the BugLady’s favorite butterflies, because of its subtle lavender beauty and because it frequents her shady backyard and her unscientifically-kept compost heap (aka “the possum feeder”). Adults get their calories from tree sap (birch and willow families), carrion, and droppings. The caterpillars, which deploy a rope of silk as they move from one site to the next, include on their menu two of the few grasses the BugLady can actually identify—bottle-brush grass and reed canary grass. According to Caterpillars of Eastern North America by David L. Wagner a northern pearly-eye caterpillar, when disturbed, raises both ends of its body and displays its twin horns and its “short, blackened mandibles.” 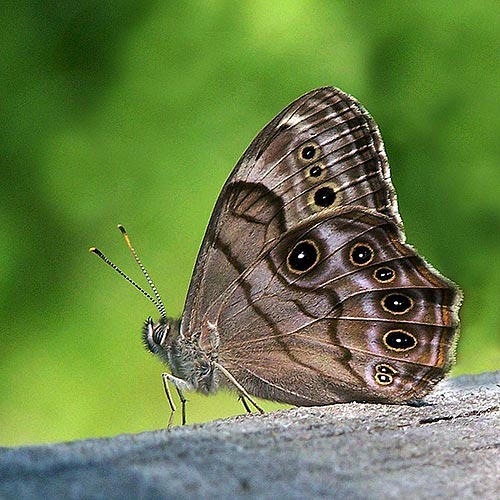 Pearly-eyes are fast flyers, about which Ebner, in Butterflies of Wisconsin, says that “the capture of the insect is usually a trying experience for the collector.” Pearly-eyes are active in early morning and in the evening. The BugLady has observed them after sunset feeding on the oranges she puts out for birds in the summer, and she hopes that BugFans will check their oranges at night and report any similar activity. In fact, the top of an orange at 11:00 PM is quite an arthropod ecosystem populated by moths, earwigs, ants, daddy long-legs, and other critters. These also enjoy eating the grape jelly that’s put out for birds, but they get caught in the sticky stuff like mammoths in the La Brea tar pits. 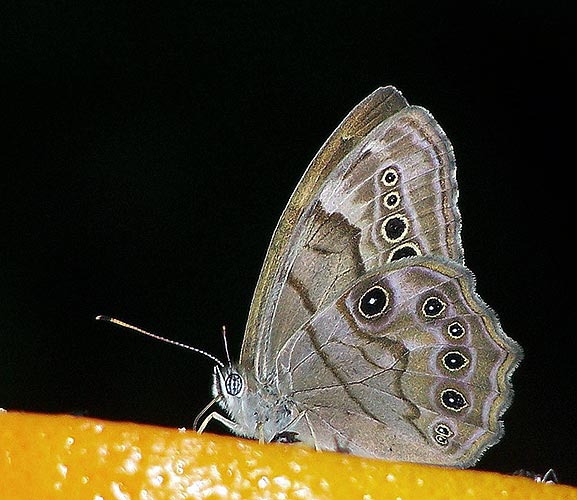