The Browns/Satyrs/Wood Nymphs (BSWNs) are a group of butterflies that can be a bit troublesome to identify in the field. They belong in the Brush-footed butterfly family, in the subfamily Satyrinae. Brush-foots have hairy front legs that are much reduced in size, and they are a common group. What makes a Brown a Brown? As the name implies, they tend to be gray-to-brown, and the eyespots on their wings are their main markings. Their sizes range from the Common Wood Nymph’s 2 ½ inch plus wingspread down the Little Wood Satyr’s 1 ½ inches. Their flight is described with words like “bouncy,” “erratic,” “weak,” “skipping,” “bobbing,” and “jerky.” 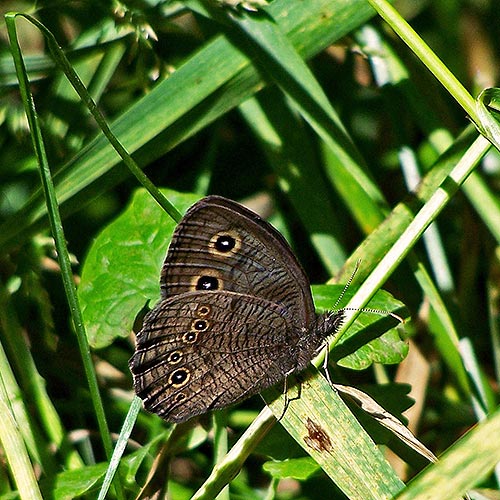 The somewhat spindle-shaped BSWN caterpillars have a granular-to-hairy exoskeleton and twin horns at the rear, and they eat grasses and sedges, at night. Their caterpillars are among the odd-ball species that spend the winter as caterpillars instead of being tucked away sensibly in cocoons.

Adult Browns don’t stray far from the habitats that support their caterpillars. As Ebner puts it in the Butterflies of Wisconsin, “wherever environmental conditions support grasses and sedges, members of the group can be seen on mountain tops, in the tundra, on savannahs and prairies, and in rain forests.” Most of the adult Browns leave flowers alone, preferring to feed on rotting fruit, tree sap, and sometimes on dung (Joseph Conrad was right).

If you’re not crazy about the classification within the BSWNs, wait a few minutes. Their taxonomy is under scrutiny, and scientists are poised to revise it. Today’s episode introduces the two species that are both earliest on the landscape and the easiest to tell apart, the smallest and the largest of our local wood nymphs.

Little Wood Satyrs (LWSs) (Megisto cymela) are butterflies of forest thickets and of grassy areas near woods, and they have adapted to life in more developed areas. LWSs can be very abundant (more about that in a sec). They will fly in deep shade and under cloudy skies. People who are used to seeing them near the ground will be surprised to hear that they also frequent the treetops. To the usual adult Satyr food list, LWSs add the honeydew from aphids, which aphids drop randomly onto the leaves they crawl on (other insects also cash in on this sweet treat), and LWSs sometimes visit flowers. 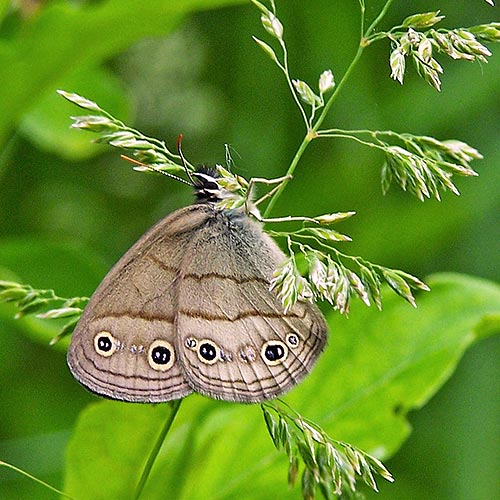 Why are there so many? LWSs emerge in two waves, with a smaller wave following about three weeks after the first. That gap is way too small for the second group to be the offspring of the first, and there is considerable discussion about who these late-comers are. One guess is that they are not just tardy siblings, they are a second, nearly identical species! As Brock and Kaufman advise in the Field Guide to Butterflies of North America, “For now it may be best to call them all Little Wood Satyrs, while recognizing that the real situation is probably more complicated.”

Common/Clouded Wood Nymphs (Cercyonis pegala) are the largest BSWN members east of the Mississippi. Despite their name they are sun-lovers, favoring prairies, fields, woodland edges, and sunny patches in woods. Their color ranges from pale tan to very dark brown. Wood nymphs do nectar at flowers occasionally, when they’re not eating the juices of fungi or rotting fruit. 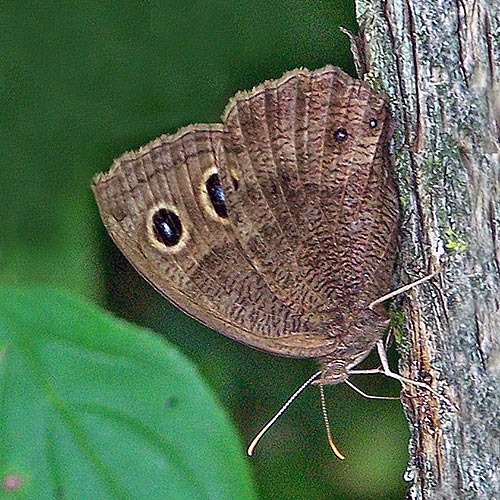 They are around all summer. Adults emerge (males first) in sometimes astounding numbers in mid-June (hopefully in time for the Butterfly Count), and the female lays her eggs in early fall. The eggs hatch soon afterward, but the caterpillars go into hibernation immediately, without a bedtime snack! They awake hungry in spring, eat, and pupate a few weeks later.

On a semi-related subject, the BugLady saw her first lightning beetle (of previous BOTW fame) in mid-May. Thanks to BugFan Andy for sending this website: https://www.mos.org/fireflywatch/