Now that spring is bursting out all over the place, the Bug Lady would like to dispense with the final, indoor “winterbugs”—the ladybug and the leaf-footed bug—both of which are among the organisms in the Bug Lady’s house that are liable to produce a bad odor when disturbed.

Ladybugs are not bugs but are beetles, in the order Coleoptera, which means sheath wings and refers to the fact that beetles have two pairs of wings, with a membranous second pair sheltered by a solid first pair. Beetles’ two forewings have adapted into a hard cover, split down the middle and collectively called the elytra, which allow them to tunnel under bark, soil, etc without damaging their flying wings. They hold their elytra out to each side like fixed wings while they fly with their membranous wings. The elytra make flying awkward and noisy and their landings a bit rough.

Ladybugs, or Ladybird beetles, were named in the Middle Ages when the beetles controlled a plague of aphids that was having its way with the grape crop. Grapes and grape by-products were sufficiently important that the beetle was subsequently blessed by the Church with the name “Our Lady’s beetle.” Adult ladybugs eat aphids; larval ladybugs eat aphids (it’s uncommon in the world of complete metamorphosis (egg to larva to pupa to adult) for the larvae and adults to eat the same food).

The Ladybug story does not, however, end happily. Because of their helpful habit of eating the aphids and scale insects that damage agricultural crops (especially the newly-arrived Asian soybean aphid), alien ladybugs have been imported by the barge-load and sold to farmers and in garden catalogs, while others have arrived as stowaways. Certainly not the most dangerous of the imported Asian beetles, (consider the Asian Long-horned Beetle and Emerald Ash Borer), but the Asian ladybug is probably out-competing native ladybugs. A mild winter followed by a long growing season results in masses of ladybugs. They cluster during the golden days of Indian summer, and then they move indoors. Overwintering inside is important for insects that may live three years and seem poised to take over the world.

The group photo is of the Asian Ladybug (a.k.a. the Halloween Beetle) in one its favorite haunts, a window frame, where daunting numbers may accumulate The trusty Dust Buster is suggested for in-house beetle control—live-trap them with the vacuum and release them at the neighbor’s in the dark of night. Swatting them results in an indelible blood-stain that looks like evidence on CSI. Spraying them results in hidden ladybug corpses which then attract scavenging carpet beetles Dermestids. The ones museums use to clean flesh off bones. The Bug Lady has those, too, but they don’t smell bad and they keep the rodent population down. (Just kidding…). Thorough caulking of windows and roof overhangs is the best preventative.

It’s been said that if the name weren’t already taken, a good moniker for Asian Ladybugs would be Stink bug (see previous BOTW). The darker their coloration, the stronger the bitter odor that is released when they are disturbed, and the accompanying bitter taste makes them unattractive to predators. It gets better—the green or yellow liquid they exude from their joints when disturbed can stain and can cause an allergic reaction. Plus, the little bug(gers) bite!

Leaf-footed Bugs are True bugs, Hemiptera (half-wing—the distal half of each of the two wings is membranous, like a fly’s, and the proximal half is leathery). About ¾” long, they have long, thread-like, four-jointed antenna. They are named for the leaf-like protrusions or flanges on their hind tibiae (that’s back legs). Besides awesome camouflage, they have that odor thing going for them when disturbed 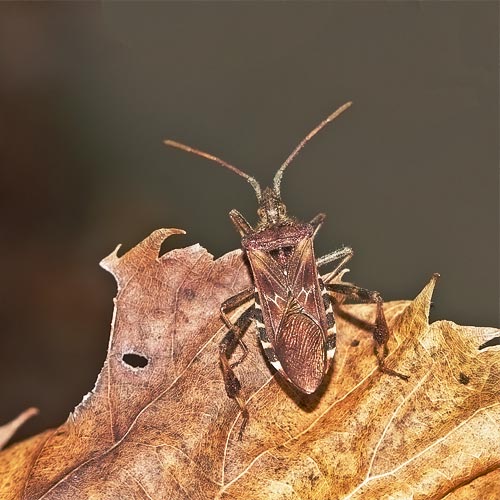 Leaf-footed bugs live on and suck the juices from vegetation (but have not impacted the Bug Lady’s geraniums, which are also poised to take over the world), and some may eat the odd, small insect. They are good—and loud—flyers. They are often mistaken for the closely-related Squash Bugs, which don’t have the “leafy-bits” on the tibia. Other species of squash bugs overwinter as adults (which is uncommon in insects) and they appear randomly in the Bug Lady’s house throughout the winter, along with the box elder bugs of previous BOTW fame.