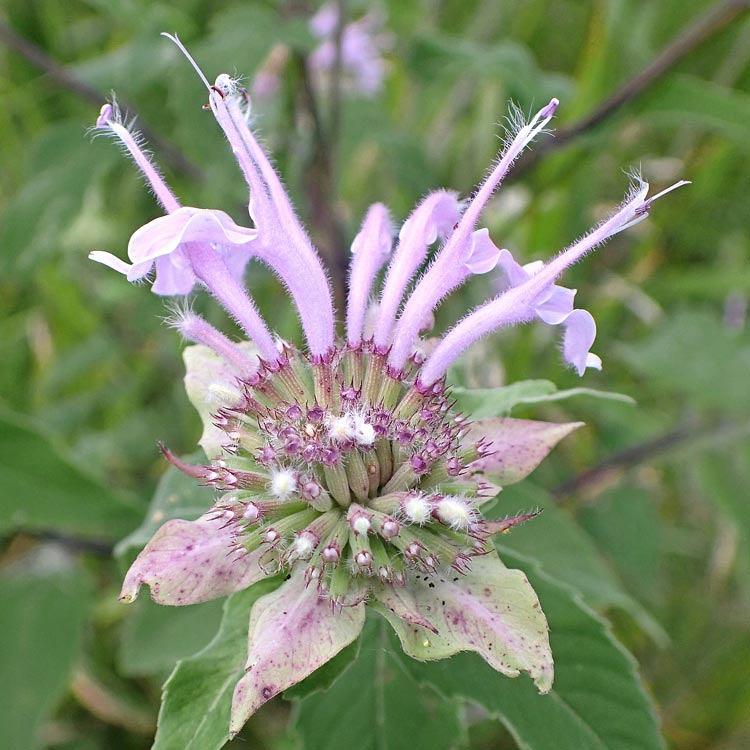 The BugLady loves wild bergamot—first, because it has classy flowers, and second, because she loves the clearwing moths that dance around their edges, leading her on an annual, merry chase. She decided to see who else uses bergamot. (With goldenrods and asters in their final inning, the BugLady is missing wildflowers already.)

Wild bergamot (Monarda fistulosa) is sometimes called Bee balm, a name that’s also applied to a red species of bergamot in the eastern US. It has a long history of human use. Native peoples used it as an antiseptic on wounds and sores, to treat gum disease, colds, flu, and intestinal parasites, and like other members of the mint family, indigestion. The leaves were brewed for tea (after the Boston Tea Party, bergamot was one of the settlers’ go-to tea substitutes), and they were added to stews for flavoring. It makes a strong and distinctive honey, and the oil was used on acne and as a hair dressing. The BugLady discovered an “off-label” use for it one day after she helped a small garter snake cross the road. The snake obliged by musking her hands, so she grabbed a bunch of bergamot leaves and pulverized them in her hands, trading musk for mint.

It isn’t an easy plant for insects to use. The flowers are long tubes (fistulosa means “reed,” or “pipe”), and even though the pollen-producing stamens are accessible, an insect must be specially equipped to get to the nectar (some wasps cheat by chewing through the sides). Butterflies, moths, bee flies, and long-tongued bees like mining bees, cuckoo bees, and some bumble bees are the chief pollinators, but hummingbirds lend a hand, too. Mint flowers have a protruding “lower lip” that insects use as a landing strip. Some grazers find the strong, mint-flavored chemicals off-putting.

The wonderful Illinois Wildflowers website describes their blooming thus: “At the top of major stems are rounded heads of flowers about 1-3″ across. The flowers begin blooming in the center of the head, gradually moving toward its periphery, forming a wreath of flowers.” Among the insects listed in the Illinois site’s “Faunal Associations” section is a specialist called the Beebalm shortface bee that bugguide.net say lives in Wisconsin and Tennessee “Although maps show wider distribution.” Something to look for next year.

The BugLady was surprised to learn that Wild bergamot is considered a weed in Nebraska.

Here are some of the insects and spiders the BugLady has spotted on bergamot over the years. As always, there are bugs that come to dine, bugs that only visit for a brief rest, and others that come to stalk their prey. 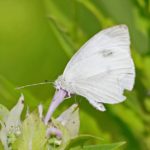 This CABBAGE WHITE butterfly is showing us how it’s done – picking a flower and unrolling its curled proboscis to reach for nectar at the bottom of the tube. 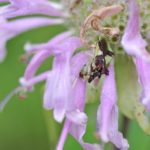 JAGGED AMBUSH BUG – If you’re having trouble seeing it, so will its next meal (hint – its head is down and angled slightly to the left). 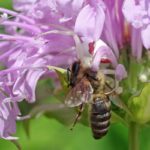 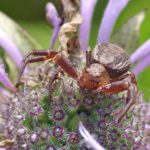 And another CRAB SPIDER, but with a different camouflage strategy. 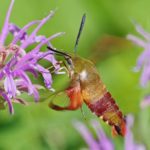 SNOWBERRY/BUMBLEBEE CLEARWING and CINNAMON CLEARWING MOTHS are members of the sphinx moth family (aka the hawk moths), a group of powerful flyers that often have dramatic color patterns and an exaggerated spindle shape . Some species, like these, are day-flying, and they’re often mistaken for mini-hummingbirds. 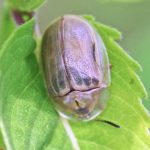 The lovely HORSEMINT TORTOISE BEETLE eats bergamot and other members of the genus Monarda . Like other tortoise beetles, its slightly-less-lovely larvae, which are Monarda leaf feeders, protect themselves both passively and actively by creating a “fecal shield.” Read all about it . 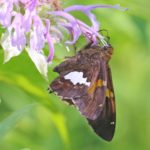 SILVER-SPOTTED SKIPPERS are the biggest skippers in Wisconsin, but they’re not the only ones that nectar on bergamot – the BugLady has pictures of a half-dozen smaller (and more confusing) skipper species in the flowers. 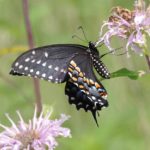 The BugLady watched this BLACK SWALLOWTAIL throw itself at the bergamot over and over with total abandon. She tries (probably not hard enough) to avoid anthropomorphism, but this butterfly’s actions seemed so exuberant! 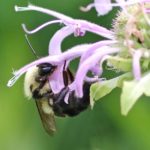 BUMBLE BEES are strong enough to pry open tubular flowers – like mints, columbines, gentians, and peas – that are inaccessible to lesser insects. This bumble bee seems to be one of the long-tongued species, but the BugLady isn’t sure whether bergamot flowers require force or finesse. 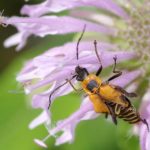 ENNSYLVANIA LEATHERWING BEETLES, members of the Soldier beetle family, are a fixture on goldenrods and nearby prairie plants during the month of August. Adults are omnivores, feeding on nectar, pollen, and tiny invertebrates; and their larvae are carnivores. This one looks a little rumpled, like it got out of the wrong side of the bed. 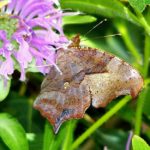 QUESTION MARKS have a silvery punctuation mark on the underside of the hind wing. There are two generations each year and two color forms – the longer-tailed, “violet-tipped,” orange winter form , and the darker-winged summer form . Spectacular caterpillar . Question marks and Commas, the anglewings, overwinter as adults in sheltered places.

And, of course, a SYRPHID FLY.