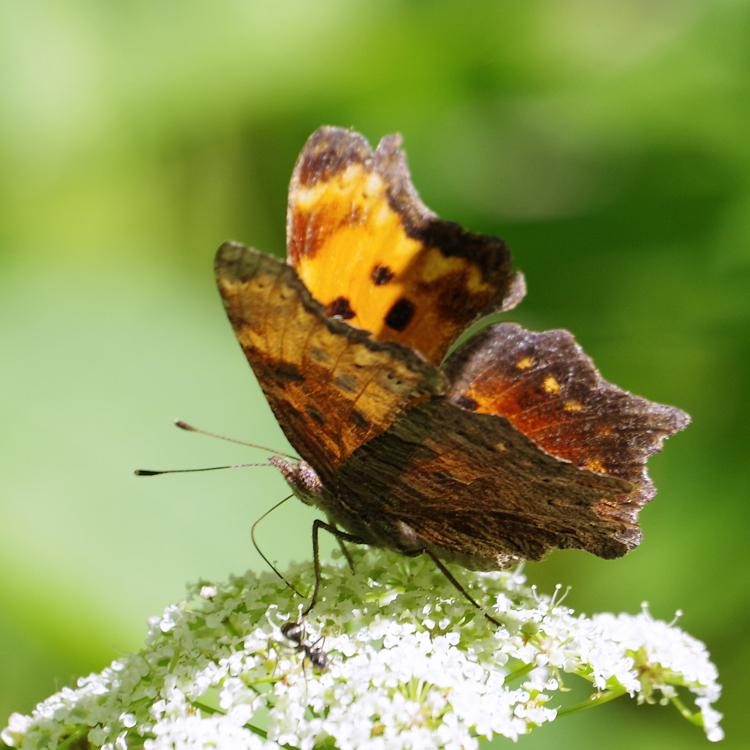 In mid-summer, water hemlock bloomed lushly in the swamps at the north end of the Bog.

A note about water hemlock (Cicuta maculata), a wetland plant that looks like Queen Anne’s lace on steroids. It’s related to the plant that killed Socrates but is in a different genus, and it’s probably the most poisonous plant in the Western hemisphere – to taste, not to touch. It can kill you within 20 minutes of eating it.  Cicutoxin is a central nervous system stimulant that causes severe seizures and respiratory paralysis. Some books say that the root “smells edible” (insert BugLady eye roll here), and some people have mistaken it for the root of the edible Wild parsnip (which looks completely different to the BugLady, has yellow flowers, and grows in uplands instead of wetlands). All parts are poison (the insects are unaffected), especially the stem and root. The seeds, the least-poisonous part of the plant, look like fennel, anise, and dill seeds, and other members of the carrot family – wild food browsers beware. Despite its toxicity, small amounts of the plant were used medicinally by Native Americans, and they employed violent purges to treat accidental ingestion.

Anyway, the plants were hopping for about two weeks. Here are some of the insects that the BugLady saw. The stars of most of them are not hitched to water hemlock, it’s just that there was a ton of it in bloom and not much of anything else. 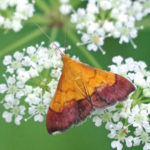 BI-COLORED PYRAUSTA
An eye-catching, day-flying moth in the Crambid/snout moth family with a wingspan of just under ¾”. It inhabits the eastern US from Texas, and its host plants are probably mints (lots of gaps in its biography). Pyrausta is Greek for “a winged insect that lives in fire.” 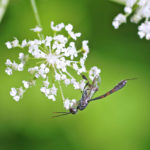 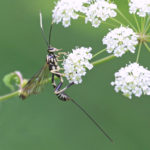 CHNEUMON WASP, AROTES
Another classy wasp! Bugguide.net describes Arotes as “A group of boldly-patterned, medium-sized ichneumons.” The larvae of Ichneumons are mostly parasites of immature invertebrates; Arotes favors beetles – members of the metallic wood-boring, the long-horned, the false darkling, and the tumbling flower beetle families, all of which are found under bark. 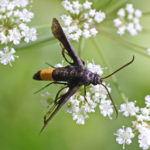 PEACHTREE BORER MOTH
Each summer, hummingbird clearwing moths dance around the BugLady, mocking her camera. The Peachtree borer is from the other clearwing moth family Sesiidae, many of which are wasp-mimics (note the scale-free and therefore clear portions of the wings). Lots of internet Wanted Posters on the Peachtree borer because of the damage done by its larvae as they tunnel around within the roots and lower trunk of commercial peach, plum, and cherry trees. They are sexually dimorphic (two forms), with the more colorful female and the equally spectacular male. 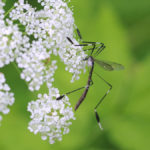 PHANTOM CRANE FLY
The BugLady usually sees these exquisite little flies drifting in and out of the shadows at the edges of wetlands (their larvae live in the mud). She was surprised to see this one sprawled on flower clusters (umbels). Some sources say that the adults don’t eat much, but others say that they feed on nectar. 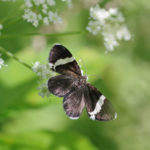 WHITE-STRIPED BLACK MOTH
Sometimes when she’s leading a field trip, the BugLady asks people what they would name the plants and animals we see. This little moth is a no-brainer. According to Sogaard, in Moths and Caterpillars of the North Woods, Black-striped white moths have very sensitive “bat-detectors,” structures that are superfluous in a day-flying species. This suggests that the day-flying habit is relatively recently acquired. 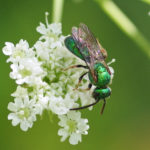 SWEAT BEE
There are three species of sweat bee in the genus Augochloropsis – this is probably the Metallic epaulleted [sic]-sweat bee (A. metallica). Sweat bees are important native pollinators that visit a wide variety of flowers, and sometimes also eat honeydew from aphids. Female Augochloropsis dig a tunnel straight down into the earth and then make a lateral tunnel off of it. There they make cells for their eggs and provision them with pollen and nectar. 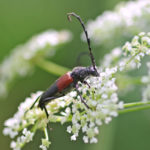 RED-SHOULDERED PINE BEETLES
These are members of the Long-horned beetle family Cerambycidae, whose larvae are often wood borers. Red-shouldered pine beetle larvae live in dead and decaying pine, hemlock, and fir, where their excavations help get the decomposition ball rolling. 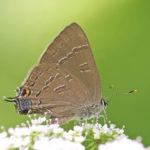 BANDED HAIRSTREAK
Small, drab (unless newly-minted) butterflies – the BugLady searched for picture of one with its wings open, but she couldn’t find one. This is a butterfly of fields, edges, and open woodlands; males perch on vegetation to check their territory for females and for rivals (who they chase vigorously). It is suspected that ants may care for the caterpillars, as they do for some species of Azure caterpillars. 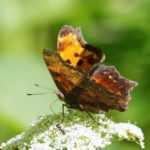 GRAY COMMA
Adults don’t visit flowers much; they get their nutrients from sap flows on damaged trees. In the Bog, gooseberries are the host plants for its spiny caterpillar. Like other “anglewings,” the Gray Comma overwinters as an adult, in a sheltered nook called a hibernaculum. The “comma” on the underside of its wings is more “V-shaped.” 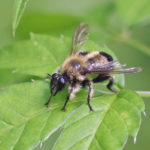 ROBBER FLY LAPHRIA
Not all the insects on the water hemlock were plant feeders. This is Laphria sacrator (probably), a fairly common fly of woodlands in the eastern half of the country. Robber flies in the genus Laphria are called the Bee-like/Bee-mimic robber flies. Several kinds of robber flies surveyed the water hemlocks, looking for flying insects, including smaller robber flies, to tackle in mid-air. Size is no object. 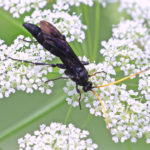 GNAMPTOPELTA OBSIDIANATOR
The BugLady saw a few species of insects that were new to her, and this is one of them. For years, she’s been taunted by Thyreodon atricolor, a spectacular Ichneumon wasp that cruises through the underbrush slowly and without stopping to have its picture made. Gnamptopelta obsidianator is its double. An expert on bugguide.net says that “I also have a feeling most of the Gnamptopelta images in the guide are misidentified Thyreodon.” Both species have been called Spider wasp mimics, too, though the BugLady is not sure what the advantage is, other than the fact that ichneumons are (relatively) docile and spider wasps have no qualms about stinging.

As if its scientific name weren’t enough of a mouthful, the BugLady found an equally tongue-twisting common name for Gnamptopelta obsidianator – the “Bent-shielded Besieger Wasp,” a translation of its scientific name. It is thought that adults may feed on nectar, but it lays its eggs on the caterpillars, especially those found on wild grapes.

And Now for Something a Little Different IX Little Wolf