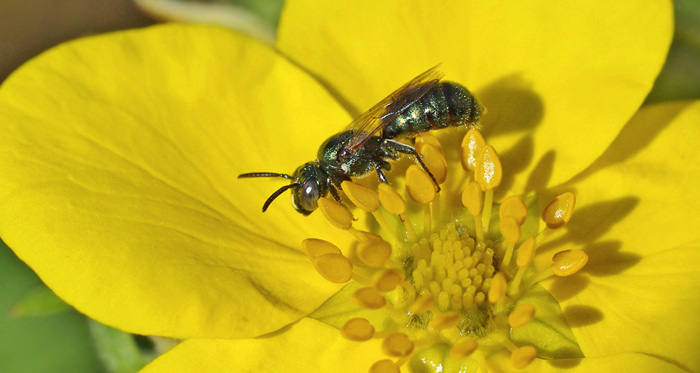 May is American wetlands month, so we’ll end it in the swamp, in the company of Marsh Marigolds, the flowers that turn newly thawed wetlands a riotous yellow from the last days of April through much of May. Skunk cabbage and pussy willows may whisper the arrival of spring, but marsh marigolds crank up the volume.

The BugLady should have started this project two weeks ago when the marsh marigold was at its peak, but the truth is that despite the masses of flowers it produces, she seldom sees many insects on it, and the ones she sees are as likely to be resting as dining. According to the great Illinois Wildflowers website, “The nectar and pollen of the flowers attract flies and bees primarily. This includes Bombylius major (Giant Bee Fly), Syrphid [hover, flower] flies, Halictid [sweat] bees, honey bees, and others. Two leaf beetles are occasionally found on the foliage of Marsh Marigold: Plateumaris nitida and Hydrothassa [Prasocuris] vittata. It is possible that they eat the foliage. For other herbivores, specific information for Marsh Marigold is lacking. Because the acrid foliage contains toxic alkaloids and glycosides, it is usually avoided by mammalian herbivores.”

Here are some marsh marigold basics, adapted from an article the BugLady wrote for the newsletter of the Friends of the Cedarburg Bog in 2012:

What did the BugLady find on the flowers and leaves? 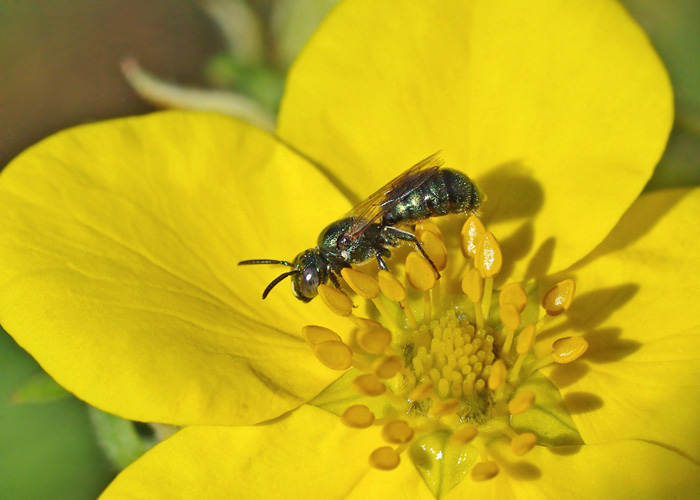 A TEPHRITID FLY – Tephritidae is the (true) fruit fly family, as opposed to the pomace fly family Drosophilidae, home of those universal lab rats, the Drosophila. Tephritid larvae develop within various plant parts. 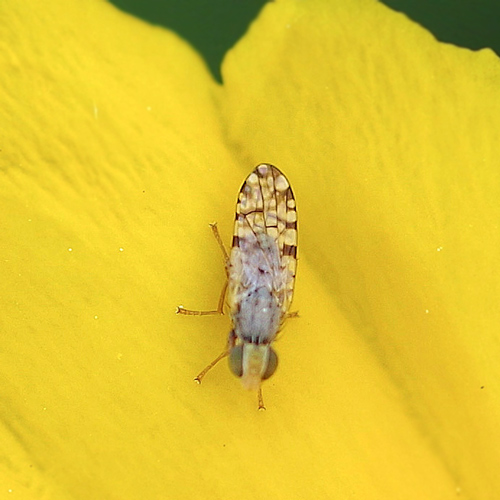 A CRAB SPIDER having a Sistine Chapel (or an ET) moment. 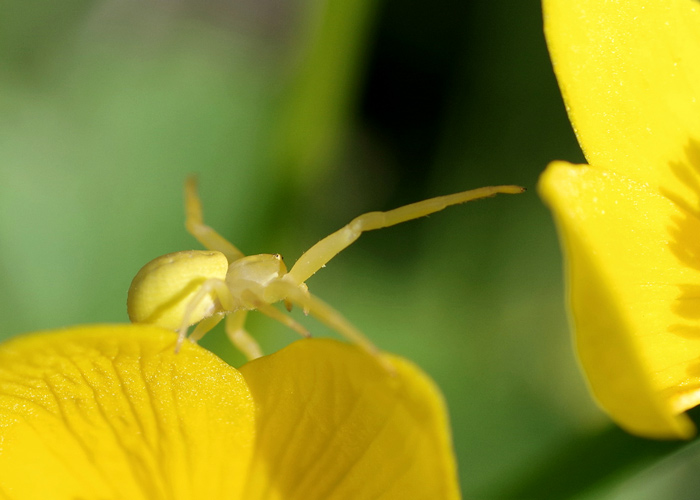 MOTH FLIES – The BugLady has been seeing these tiny (1.5 to 4 mm), aptly-named flies (family Psychodidae) on the vegetation in wetlands recently. Some moth flies live wholesome existences, and others live in sewers and feed on the by-products thereof. These feed on nectar and on stuff they find in stagnant water; their offspring eat algae, fungi and bacteria suspended in the still waters of the swamp. For the story of another group of moth flies, see this past Bug of the Week. 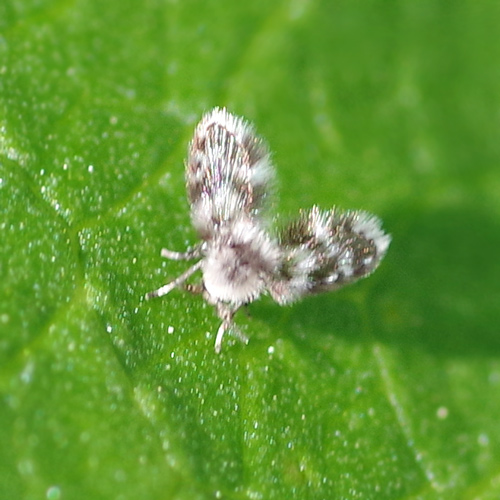 (PINK) SPOTTED LADY BEETLE – Ladybugs eat aphids and other tiny critters, both as larvae and as adults – you can find both stages feeding in aphid herds side by side. Pink lady beetles prefer dampish habitats, and, according to bugguide.net, “Unlike most lady beetles, plant pollen may constitute up to 50% of the diet. This is the only North American lady beetle that can complete its life cycle on plant pollen.” 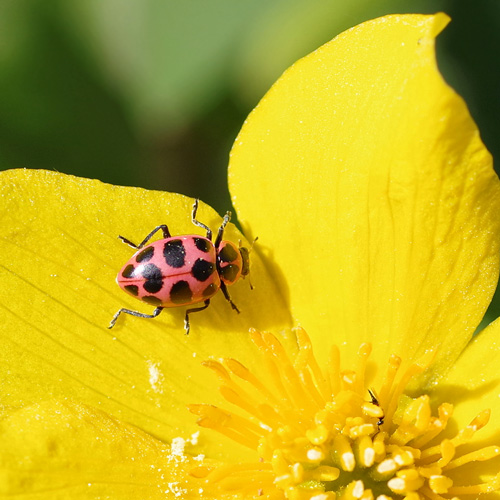 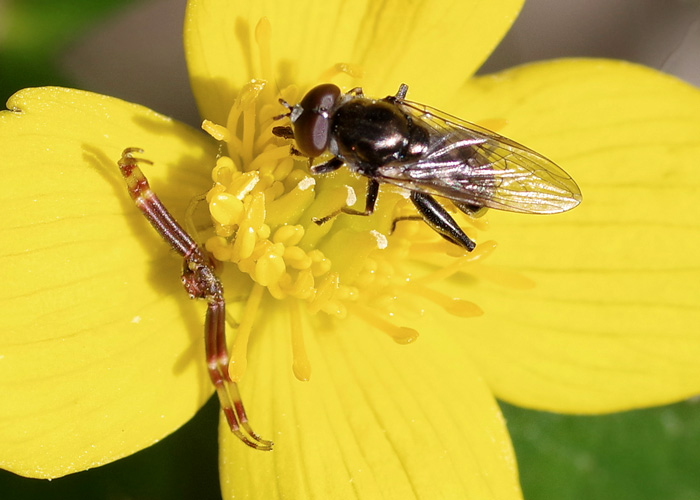 ANTS are unsung (and ineffective) pollinators. Yes, they are all over the flowers, but since they are on foot, it’s hard for them to move pollen from one flower to another (unless it’s a cluster of flowers). Plus, they groom their slick little bodies constantly. 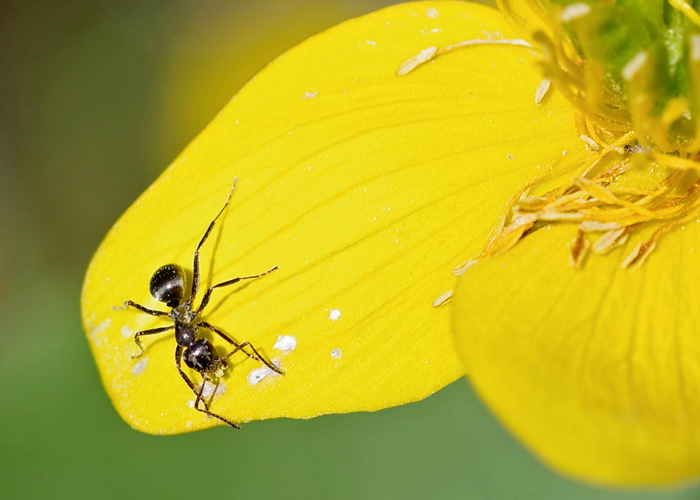 BAG WORM – This little collection of plant material looks like a case made by a bag worm moth larva called Psyche casta. The BugLady often sees these on screens and siding and even on leaves, but never before on flowers. Larvae make the shelters, enlarge the shelters as they grow, pupate in the shelters, and the wingless adult females receive suitors in the shelters, and lay their eggs there. 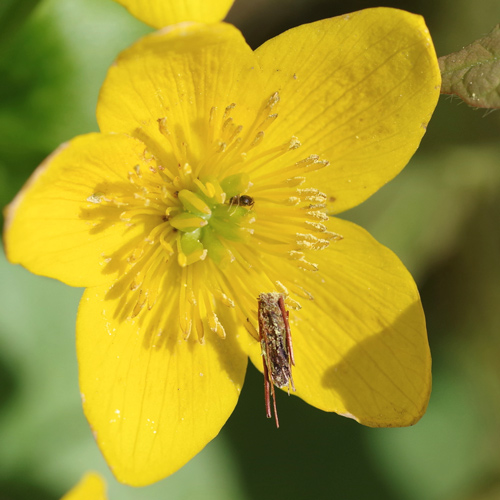 SYRPHID FLY – aka Hover or Flower fly. A great group of often-exquisitely-marked bee mimics that feed on pollen and nectar. 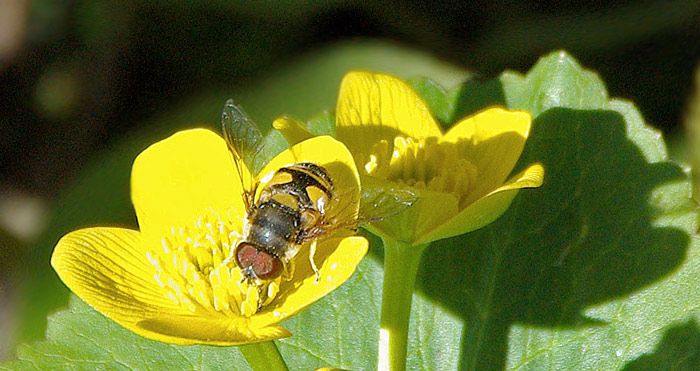 MOSQUITO WITH MITE – Both male and female mosquitoes feed on nectar – males exclusively and females as a supplement. This one is being fed upon by the nymph of a water mite that attached when the mosquito was in its aquatic, larval stage. 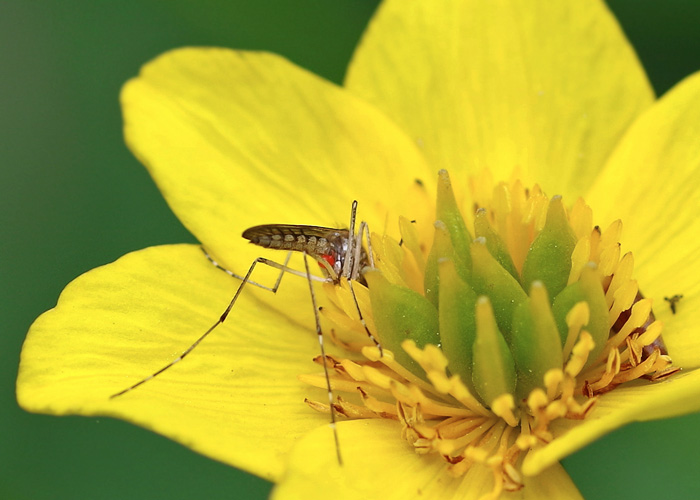 BUTTERCUP BEETLE Prasocuris vitata – A leaf beetle (Chrysomelid) that is a buttercup/marsh marigold specialist. Check out this previous Bug of the Week on the Buttercup Beetle. 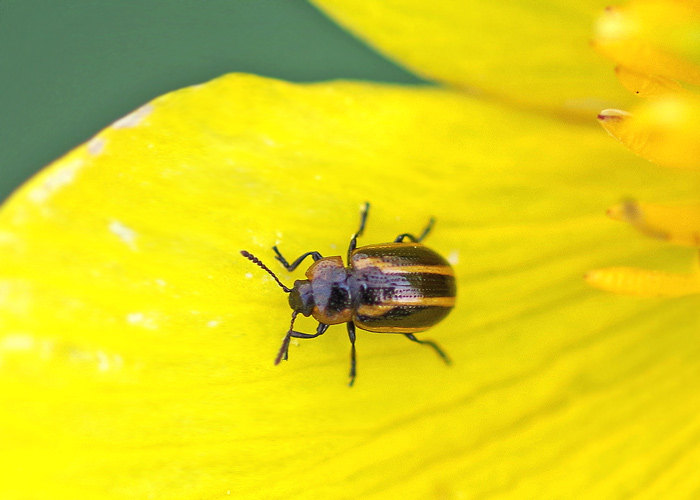 PLATEUMARIS NITIDA – The BugLady’s first thought was “what’s a Donacia (a water lily leaf beetle) doing in a marsh marigold thicket, far from the nearest water lily?” Then she looked up the second beetle mentioned in the Illinois Wildflower site. It turns out that some members of the genus Plateumaris are Donacia look-alikes and marsh marigold is listed as the host plant of at least one species. The beetle’s gleam is due to physics, not pigments. While looking for info about this beetle, the BugLady came across this nicely illustrated paper about the feeding behaviors of leaf beetles. 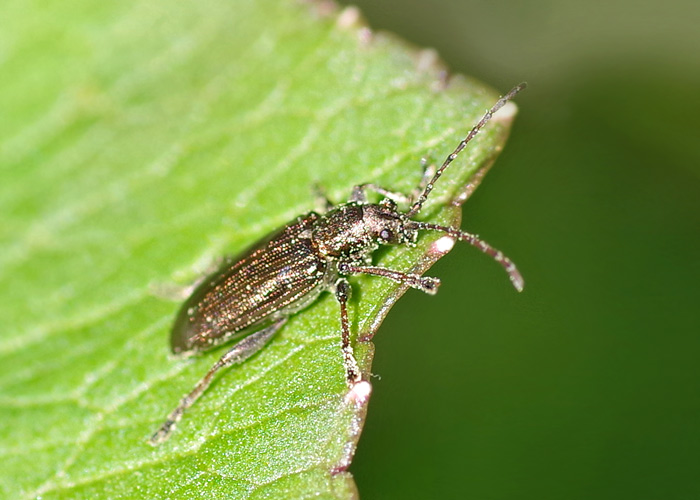 Also seen were a plume moth, a soldier beetle, several more spider species, and a mining bee, and a clever shelter built by a spider that bent a yellow sepal over and anchored it with silk.

FYI – BOTW will, as usual, be Closed for June, so that the BugLady can go out and photograph the heck out of the local nature areas. She will post tasteful and timely reruns.