The BugLady’s evening hours at the computer are now accompanied by the soft “thunk, thunk” of June beetles hitting the window.

If the first rule of looking for insects is “check the flowers,” then wild geraniums (Geranium maculatum) are the flower to watch right now. Showy, rosy-pink-to-purple blossoms that stand out in a landscape dominated by white and yellow. They line roadsides and forest edges and grow in semi-sunny woods, the dense stands originating from thick rhizomes (horizontal underground stems). Their name comes from the Greek geranos (stork) and refers to the long, pointed shape of the fruits, fruits that will eventually explode and propel the seeds many feet from the parent plant. Insects perceive UV light differently than we do, and the transparent veins that lead them across the petals to the payload at the center of the flower (they’re called “nectar guides”) are far more conspicuous to them.

The BugLady was surprised to discover that this chunky little beetle (genus Anthaxia) is in the Buprestid beetle family (Buprestidae), a.k.a. the Metallic wood boring beetles, a.k.a. Jewel beetles. Metallic and jewel-like, it isn’t. Adult buprestids fed on vegetation, pollen or nectar; it’s their offspring that do the wood-boring, usually in already-weakened woody plants. Looks like this Anthaxia goes for flower petals. 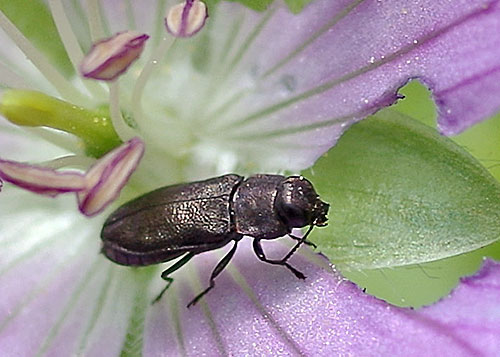 Arctic skippers (Carterocephalus palaemon) are northern in distribution but their range isn’t exactly Arctic. It’s listed in bugguide.net as “circumboreal: in North America, Alaska and coast to coast across Canada and northern U.S., south in the west to central California, south in the east to Pennsylvania.” They also occur in Europe, and the British call them Chequered Skippers. The BugLady finds them in moist, dappled, woody habitats. Adults nectar at flowers, especially purple ones, though the BugLady has seen them on the whitish flowers of black raspberry. Butterflies of the North Woods tells us that their courtship behavior “includes a display where males and females open and close their wings in unison.” 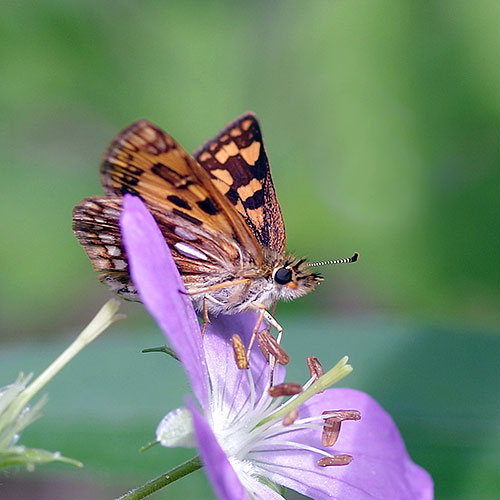 Looks like this bumblebee almost exceeds the weight limit for wild geranium. 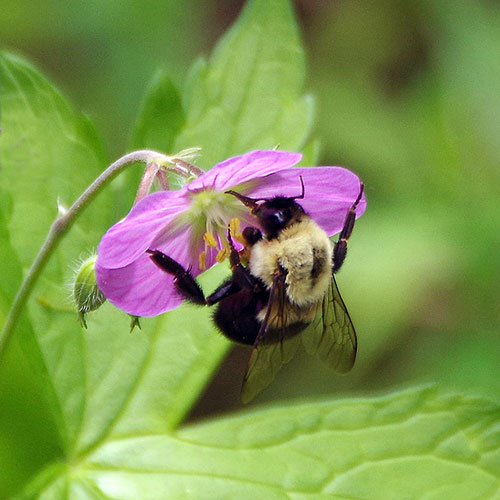 Click beetles (a.k.a. jackknife, snapping, spring beetles or skipjacks), are famous for their ability to get from upside down to right side up. They have a tongue-and-groove arrangement on the underside of the thorax that allows them to arch and then curl, snapping a spur into a groove, levitating into the air with an audible click, and landing on their feet. The BugLady doesn’t know who this small click beetle is, but she often sees it on white trilliums in the middle days of spring; it probably eats pollen. 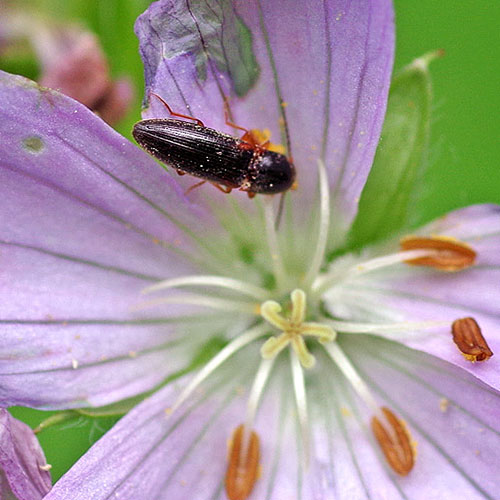 Flowers are a good place to eat or be eaten, and this crab spider will be happy to assist with the second. 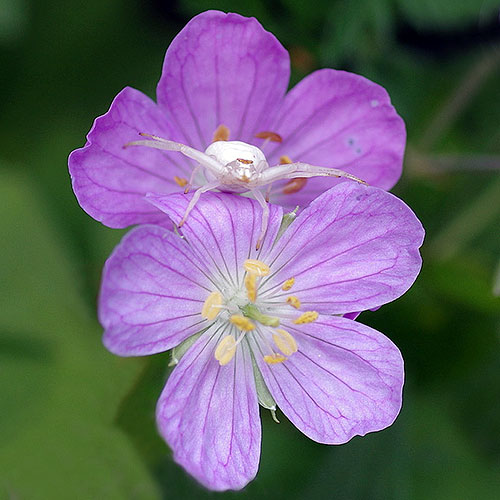 So will this daddy long-legs. 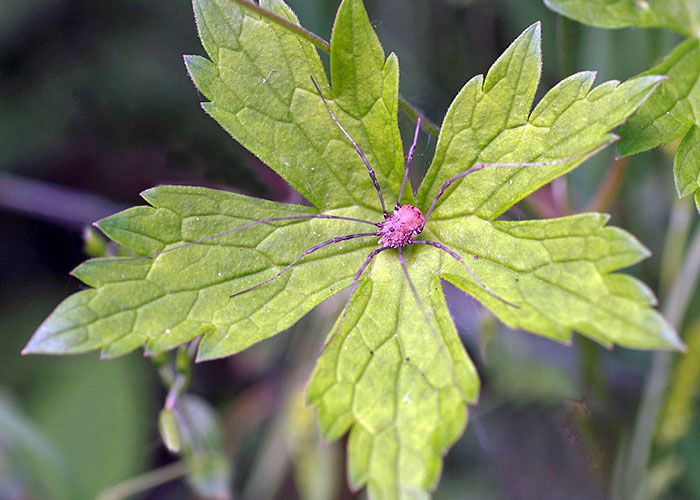 A small, common, rust-colored beetle of spring, Anapsis rufa (probably) is in the False Flower Beetle family Scraptiidae. Adults like a variety of flowers, but larvae are found under bark or in rotting logs. It can be seen in woodlands and edges across the northern two-thirds of the continent. 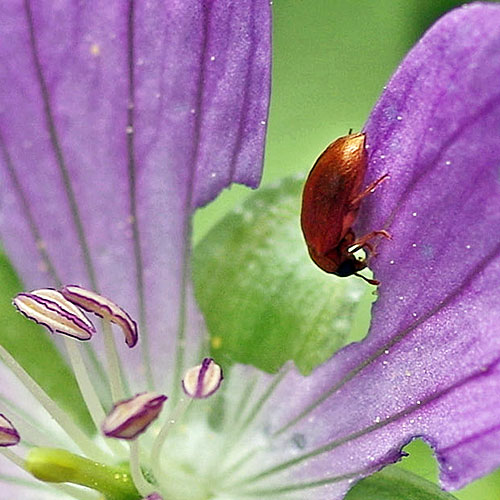 The BugLady takes more “Hail Mary” shots of Hummingbird Moths than of any other insect. They hover, move abruptly, pause briefly, and love terrible photographic backgrounds. This Bumblebee Hummingbird moth/Snowberry clearwing moth (Hemaris diffinis) was a real treat, especially since hummingbird moths often use their long proboscis to probe for nectar in tubular, not flat, flowers. Because they hover, they are often mistaken for tiny hummingbirds. 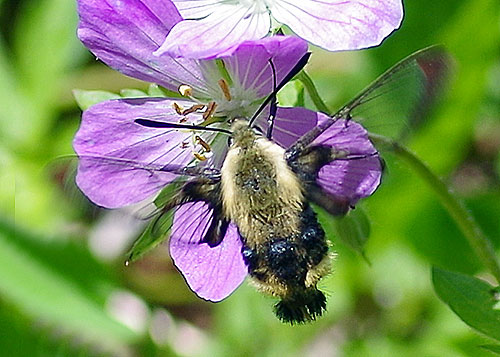 Mining Bees are native, solitary bees (not social, like honeybees) that feed on pollen and nectar and so are responsible for a tremendous amount of pollination. You have to work pretty hard to get stung by one. 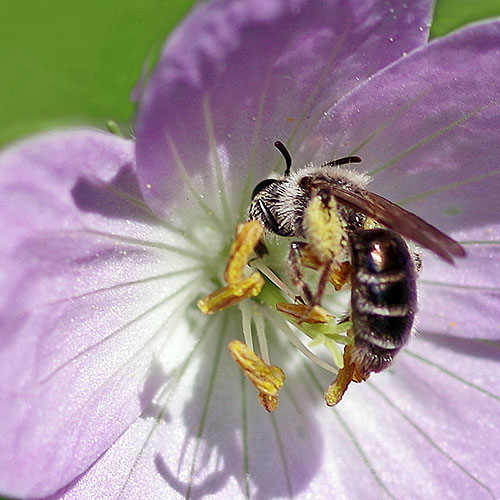 Sweat Bees are another family of important and abundant native pollinators—some are “bee-colored,” and others are bronze or emerald green. Like mining bees, they are solitary-to-semi-social bees that make nests in the ground and, supply their larvae with pollen (sometimes formed into balls) and nectar. Sweat bees get their name from the habit of some species of landing on sweaty skin and to stinging when brushed off (the BugLady’s husband was allergic to their sting, and the allergist he consulted said, “what’s a sweat bee?”).

Sometimes a flower is simply a handy platform to land on. Male mosquitoes (feathery antennae) do feed on plant juices, though this one was just resting. Females will also eat plant juices but eventually need a blood meal. 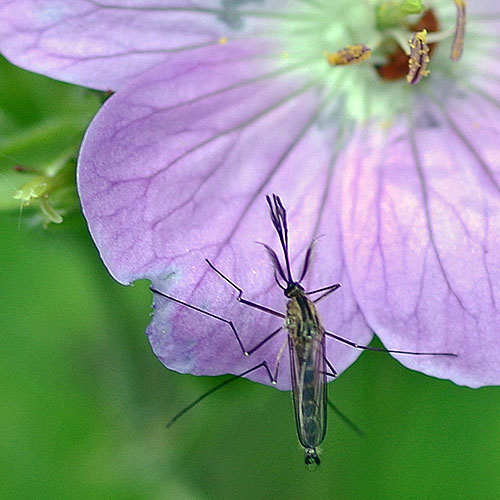 But, some insects contract other business there. Pidonia ruficollis is a long-horned beetle (family Cerambycidae, flower longhorn subfamily) whose larvae feed in the wood of a variety of hardwoods. 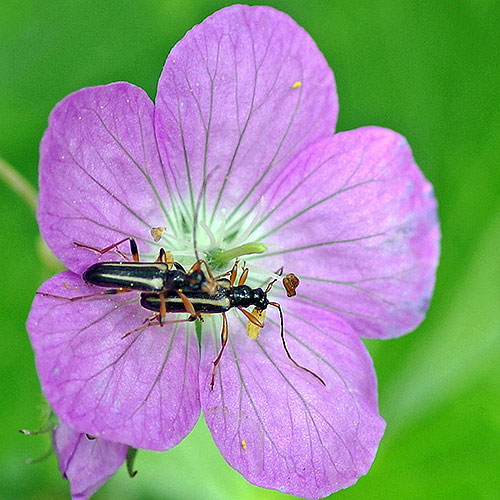 Shy white-spotted sable moths (Anania funebris) dive below the flowers to avoid the camera. Their species name, funebris, refers to their funereal dark color, though those white spots brighten the mood. Because it’s a flashy, daytime flyer, it’s often mistaken for a butterfly (moths tend to fly for short distances and take cover in vegetation—butterflies don’t. The larval food is goldenrod. 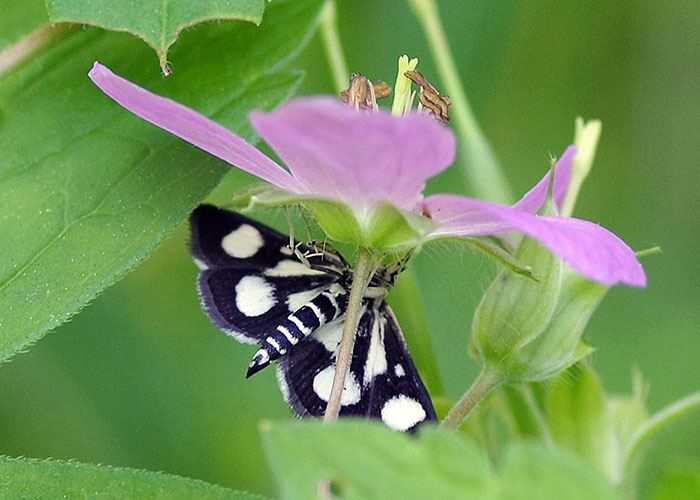 This beetle is (probably) Trichiotinus viridans, a Flower chafer in the scarab beetle family. Members of the genus are variously called Bee-like flower scarabs and Hairy flower scarabs/Hairy flower beetles (the beetles are hairy, not the flowers). With their buzzy flight, it’s easy to mistake them for bumblebees (the BugLady found one tantalizing note saying that unlike most beetles, which hold their elytra out to the side like mini bi-planes while flying, Trichiotinus can fly with its elytra folded. Adults eat pollen/nectar, and larvae feed in rotting wood. 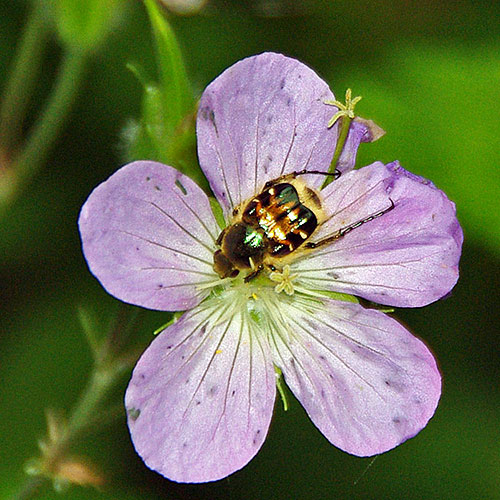 Seen but not pictured—ants, a jumping spider, a thick-headed fly, a two-spotted stinkbug, a honeybee, a curiously-immobile soldier beetle that may have been spider prey, and syrphid flies.

Bugs in the News II