The BugLady loves dandelions—3 dandelions – 30 – 300. She lives rurally—no HOA to frown on her untreated and often shaggy lawn (she needs sheep). Dandelions are beautiful (Thoreau called them “a sun itself in the grass”) and extravagant and edible (humans have eaten their vitamin-rich leaves for almost as long as there have been humans) and drinkable (both wine and coffee) and medicinal (their use as a diuretic is hinted at by an English common name “piss-a-bed”), and they are prodigious survivors. If they weren’t volunteering everywhere, we’d be buying them in garden stores (read about their reproductive redundancies in John Eastman’s The Book of Field and Roadside). The Japanese have developed more than 200 cultivars, with flowers ranging from white to black. 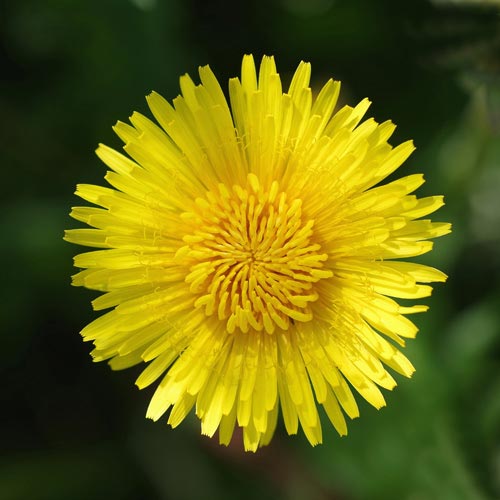 They are in the plant family Asteraceae (formerly Compositae)—the aster/daisy family. That means that rather than a single flower, each stalk holds a whole bouquet. Wikipedia says that they have “very small flowers collected together into a composite flower head. Each single flower in a head [One-hundred fifty to two-hundred per] is called a floret.”

Dandelions probably originated in the Mediterranean area of Europe, and like most of our ancestors, came over on the boat—in this case, brought by the Pilgrims, on purpose, in 1620. The French phrase dent de lion, meaning “lion’s tooth,” is the origin of their name and refers to the shape of their leaves.

They produce both nectar and pollen and so are appreciated by wildlife, especially early bees and butterflies (Eastman says that 100 species of pollinators have been tallied). The “pay dirt” is deep within the flower head, which results in some interesting photographic angles. Their leaves, seeds and roots are eaten by vertebrates and invertebrates alike. Some birds line their nests with the fluff.

So, the BugLady has been dawdling among dandelions to see who else appreciates them. She saw representatives of 8 kinds of hymenopterans (ants/bees/wasps), 4 kinds of flies, 3 of arachnids (spiders and spider relatives), and 1 beetle. Seen, but not photographed, were a few cabbage butterflies. Some come to eat dandelion parts; some come to eat dandelion eaters; some to rest or to woo; one, like Clark Kent, stepped onto the flower and left transformed, an empty skin (exuvia) its only trace. Most leave with a load of pollen—what successful little plants! Here, against the world’s most cheerful yellow, are the usual suspects. Bottoms up!

Ants, due to their slick exoskeleton and fastidious grooming habits, aren’t super pollinators, but every bit helps. They dive into the floret, head first, to harvest the sweet nectar.

The large Bumblebees of early spring are the queens, who must care for their first brood themselves. When those workers hatch, they take over the child care and maintenance duties from their queen.

Carpenter Bees look like a bumblebee with a bald behind. Males are aggressive but harmless (they’ll hover and give you the “Evil Eye”) and females, though equipped with a stinger, are pretty mellow.

Honeybees came over on the boat, too; Native Americans called them “White man’s flies.” You can buy dandelion honey (made by bees) and you can also find recipes for a sugar syrup called “dandelion honey,” made with dandelion blossoms.

Mining Bees and Sweat Bees (they can be hard to tell apart) are important, unsung, native pollinators, and many species are among our earliest pollinators. Many nest in burrows in the ground or in wood, and although they are not communal in the same sense as ants or honeybees, will tolerate their sisters nearby.

Polistes Wasps are the paper wasps, so-called because they chew on cellulose (bits of old paper/bark/wood), mix it with their saliva, and spit out paper pulp, which they smooth into nests. Adults eat nectar and other sweet liquids, but they hunt for caterpillars to feed their larvae, spreading pollen as they go.

Flesh Flies are important decomposers, the details of which will be left to the BugFans’ imaginations. Adults feed on liquids; larvae on squishy, organic materials. Mom gives her offspring a leg up on the competition by larvapositing (depositing mobile larvae) on a carcass instead of ovipositing (laying eggs). Their rhythms have been charted by forensic scientists.

The BugLady loves Syrphid/Hover/Flower Flies (it’s the hovering that gets her) with their variable and often-exquisite yellow and black designs. These bee-mimics eat nectar and/or pollen.

Everyone loves Jumping Spiders, so named because they do. They are bold, and flat-faced, and they make eye contact with all eight of theirs. An internal hydraulic system assists the jump, and the spider spins a dragline as it launches, should things go awry. The BugLady’s mailbox ants have made their annoying annual reappearance; the mailbox jumping spider (Phidippis audax) can’t keep up with them.

Spider courtship is a touchy thing—a potential beau may “stay for dinner” if he reads the signals wrong. The (smaller) male Dwarf Spider, on the right approached her slowly, then reached out and touched her. She jumped. He jumped. They moved away from each other.

An Empty Insect—a skin shed by an unknown insect, whether to enjoy, briefly, a stretchy exoskeleton that will allow it to eat and grow, or to change from an immature to its adult form. Happy trails.

The BugLady also loves Crab Spiders. This Goldenrod crab spider can change from yellow to white to yellow, though it takes time. Turning yellow takes longer—as much as 3 weeks—because the spider must manufacture the pigment. Turning white is a matter of excreting the yellow. The change is stimulated by what the spider sees around her.

Red Velvet Mites are spider relatives—mites are the biggest group in the spider/mite/tick bunch. Most are unnoticed because they’re beyond tiny. The BugLady thinks these bright, plush critters are neat, and she’d never seen one on a dandelion before. Adults prey on very small invertebrates and on insect eggs; their nymphs suck the blood of ground-dwelling, cold-blooded animals.