The Lepidopterists’ adage that “the homelier the caterpillar, the more spectacular the adult (and vice versa)” is certainly borne out by the White-marked Tussock Moth (WmTM). WmTM pere is a stocky, hairy, brownish moth with long feathery antennae. WmTM mere is stocky (egg-bound), hairy, brownish and wingless, with simple antennae. But, WmTM fils et fille are dynamite. 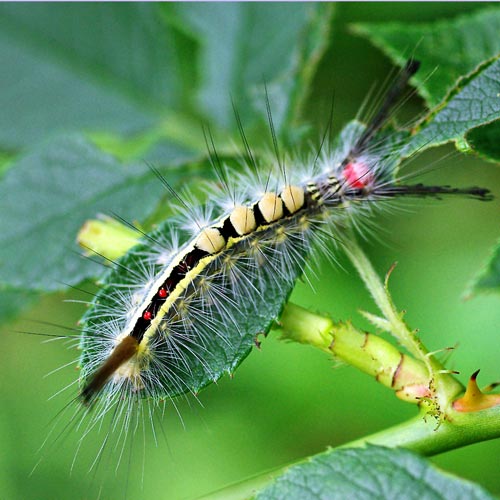 It’s not hard to figure out that tussock moths get their names from the plush tufts/tussocks that decorate their abdomens. The color of the stripes and tufts on WmTM caterpillars may vary from white to yellow, but they have in common four white tufts toward the front, a bright red head, two small, red dots toward the rear, and a black stripe down the center of their back, bordered below by a yellow stripe.

WmTMs (Orgyia leucostigma) are in the tussock moth family Lymantriidae, a cold-tolerant lot populated by a number of black sheep including the gypsy moth, of previous BOTW fame (gypsy moths are introduced; WmTMs are native). You can find them from the Great Plains to the Atlantic Ocean, including southern Canada, in mixed forests or in the shrubby edges where woods meet fields.

Because of their catholic appetites, WmTM caterpillars are among the Black Sheep. They have occasional local population booms and defoliate trees, and Christmas tree growers in the northeastern part of their range are sometimes plagued by them. Outbreaks typically end when a virus makes the rounds of the WmTM population, and a fungus introduced to control gypsy moths also kills WmTMs. Periodic defoliation, “frass showers,” parachuting caterpillars, and irritating hairs have scant appeal on the urban landscape, but spraying may be overkill if it takes out the WmTM’s predators, too.

The adults’ life is short, nocturnal, and, with only vestigial mouthparts, doesn’t include feeding. Wingless females emerge (she is sometimes described unflatteringly as “slug-like”), climb up on their cocoons, and send pheromones into the air. The winged male’s fancy antennae detect the signal and he zigzags through the air until he finds the lady. She lays her eggs en masse, on the spot (often on the top of her empty cocoon), covers them with a frothy substance that she produces, and dies. Newly-hatched caterpillars skeletonize leaves by nibbling the tissue between the veins, but as they grow larger, they eat everything but the leaf’s main veins. They pupate in a cocoon made of silk and body hairs, and the process is repeated. There may be a few generations per summer, and the final brood overwinters in the egg stage, hatching the following spring as the trees leaf out. 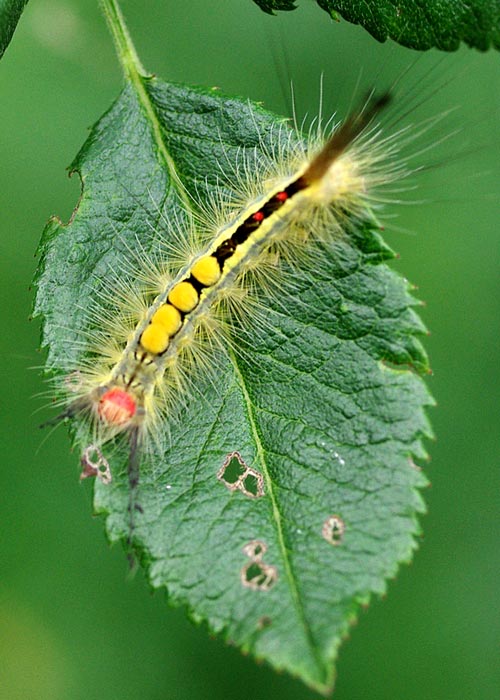 With egg-laying happening almost exactly where the female came out of her cocoon, you would think that there would be minimal dispersal and that WmTMs would get all stacked up in one spot, but you would be wrong. Tiny, very young caterpillars spin a line of silk and let go—ballooning into the unknown. Launching themselves into the void only works because WmTM caterpillars are food generalists, eating more than 140 woody plants, both deciduous and evergreen. Even though there are friendly food plants waiting, many caterpillars do not survive this airborne ride. Birds and other predators, parasites, inclement weather, and starvation account for most of each brood.

Defenses? You bet! There’s a theory that the four white tufts mimic the external cocoons of parasitic wasps (whose cocoons typically look like the tips of swabs), effectively hanging out a faux “No Vacancy” sign. Contacting some of their array of hairs with sensitive skin like the inner arm (or the stomach—the BugLady does not want to know how this would occur) results in an allergic irritation/reaction for many. There are two ways that hairs can irritate. One is simply mechanical, like a cactus. The other involves the injecting of toxic chemicals through hollow hairs. Sources agree that a few chemical-producing “defensive glands” (red, in the case of the WmTM) are located on the caterpillar’s caboose. The BugLady could not find a source that actually stated that the poison glands manufactured a chemical that is injected when someone touches the hairs, but it was strongly implied that the irritation is more than mechanical. Add to that the fact that the caterpillars routinely groom themselves by wiping various body hairs over the poison glands, and something is clearly going on. Their “in-your-face” color scheme is a warning coloration.

A number of authors suggest searching for cocoons in winter. Grayish cocoons are fixed to bark crevices or to twigs under dried leaves that are (uncharacteristically) still attached to a tree or shrub in winter. The caterpillar reinforces the leaf’s attachment with silk before pupating in its shelter. Cocoons display sexual dimorphism—the male’s cocoon is a half-inch long and the female’s is an inch. If you find a cocoon, it might be an old one with eggs attached to the top. One author suggests collecting cocoons and putting them in a covered container. Within two weeks, you’ll have caterpillars and, because up to 50% of moths are parasitized, some of your jars will contain a few of the moths’ biological controls instead. One of the BugLady’s favorite insect references says that the caterpillars’ hairs are harmless, but he is shouted down by most other authors. There is evidence that the cocoons may also provoke a reaction, so collect cautiously (and, for heaven’s sake, keep them away from your stomach…).