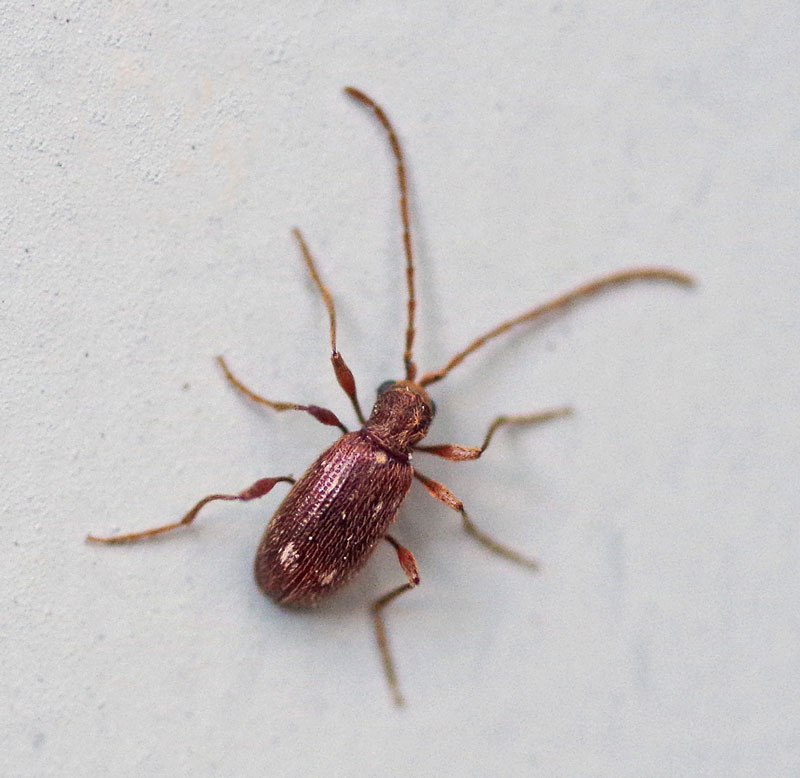 The BugLady found this cute beetle crawling up the outside of her house on a warm day in early spring about five years ago, and she stumbled across its identity recently (page 209 of your Kaufman and Eaton Field Guide to the Insects of North America, if you’re singing along). Yes, it’s a small and obscure beetle, but BOTW isn’t just about the flashy stuff, and besides, this little guy belongs to quite a notorious family and has a big story.

It’s in the family Ptinidae, which includes the spider and deathwatch beetles.  Deathwatch beetles (subfamily Anobiinae) are so-called because there are some species that inhabit timber in houses (where they may do significant damage to the integrity of wooden beams and joists), and the clicking noise they make by hitting their head against their pronotum (the shield that covers the thorax) has been interpreted as an omen of death, especially in the time of plague. Spider beetles belong in the subfamily Ptininae, and many of them do, indeed, look like spiders, with the extra-long antennae giving the illusion of a fourth pair of legs.

Wikipedia tells us that the taxonomy of the family has been under review (of course) and that these compact beetles are tough to ID to species because they’re so small.  There are 2,200 family members worldwide and about 400 in North America.  Classical language scholars will recognize the root of the family name – ptin – which means “feathered.”

Larvae of many of the Ptinidae tunnel in wood (“woodworms”), and both the larvae and the adults scavenge on dry organic materials, mostly plant (you can tell that the adults aren’t wood borers because those antennae would never survive a tunnel).  Common names like drugstore beetle, cigarette beetle, and furniture beetle give us some idea of what they’re up to. Various species enjoy stored grains, tobacco, museum collections, prescription drugs, boxed cake and other mixes, and Egyptian tombs, and others may pop out of your wood furniture. The range of many is described as “cosmopolitan,” and the species that live in commercial products are routinely shipped around the country and the world.

According to the University of California Riverside Urban Entomology website, spider beetles “can remain active in freezing temperatures, and can therefore be pests in certain climates and circumstances in which other insects cannot. The farther north, the greater the relative importance of spider beetles. In North America, they attain their greatest relative importance in the northern U.S. and in Canada, where they can survive the winter in unheated warehouses and seriously infest cereal products during the spring and summer. Because spider beetles can live as general scavengers, they can survive on rat droppings and miscellaneous debris in buildings such as empty warehouses.”

Females are egg-laying machines that will oviposit for much of their allotted lifespan as long as there is food and water available for their larvae. In foodstuffs, larval damage comes partly from their feeding and partly from the aesthetics of the webbed feeding shelters and cocoons they spin. And, of course, from the carcasses of adult beetles that emerged inside your box of cornmeal and couldn’t escape.

There are about 70 members of the spider beetle subfamily Ptininae in North America and at under ¼” long, they’re easy to overlook.  Some are flightless, and in other species, only the female is. Bugguide.net tells us that a few species make themselves at home in houses (but unlike the death watch beetles, they won’t eat it), while others occupy warehouses, mills, granaries, etc.  Others are found in the nests of mammals, birds, and bees (where there’s plenty of decaying organic material to be had), and a number of species have symbiotic relationships with ants, living in anthills as inquilines (the BugLady loves to throw that word around) and grooming the ants.

The WHITE-MARKED SPIDER BEETLE (Ptinus fur) (fur is Latin for “thief”) is found across North America and around the world, and it’s one of the most commonly seen Ptinids.  It’s not native to North America but has been here a long time (it was first reported in the New World in 1620). It’s distinguished by two tufts of yellowish hairs on the pronotal disc. WMSBs are deceptively hairy.

Female WMSBs are flightless and more globe-shaped than the elongate males.  They lay eggs singly, in crevices, but a few larvae typically get together and feed together within a mass of food particles that they glue together. They pupate separately, and the pupal stage lasts about three weeks, but the adult stays inside its cocoon after maturing up to a month longer, which gives its “skin” (exocuticle) time to get firm.

Thanks to Honorary BugFans Dan and Rachel for ID confirmation.