It’s been a strange spring. Apparently, the gods are not quite ready to turn off the snow machine, and we celebrated Tornado Awareness Week by having tornadoes. But the box elder bugs are waiting patiently to get out, frog chorus is off to a grand start, and the mailbox jumping spider is in situ, awaiting the arrival of the mailbox ants and earwigs. On a recent prairie jaunt, although only the first inch of Pasque flower leaves were poking up, the BugLady found ant mounds thick and dark with Western thatch ants (Formica obscuripes) (a.k.a. Formica rufa obscuripes).

Formica (the accent’s on the first syllable, unlike your counter-tops) is a large genus of ants whose members practice a wide variety of lifestyles worldwide. They especially like areas that get less than 10” of rain per year, and in those habitats, they tend to be THE ANT.

Western thatch ants (WTAs) build impressive mounds averaging 8” tall, 2 ½’ to 3’ across, and 5’ deep (the water table is a big factor) with 17,000 inhabitants (max is 30,000, plus or minus). The ants make chambers in the soil and then they cover the top of the nest with “thatch”—small twigs (up to several inches long) and bits of grass and herb stems. One researcher recorded about ¾ bushel of thatch per ant mound. Due to prairie winds, snows, and rains and to foot traffic by wandering animals, the thatch constantly needs repair by the workers. Workers come in three sizes (castes) and their jobs depend on their caste. WTAs prune, by gnawing on them, the plants that grow on and immediately around their nests; researchers think they do this in order to minimize shade on the mound’s top. 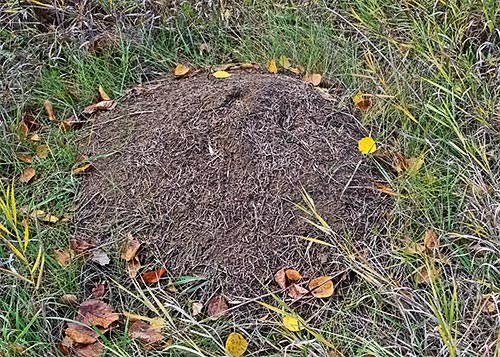 Why? The temperature inside the solar-heated mound is warmer than that of the surrounding soil, and the thatch acts as insulation. The result is nursery chambers that are climate-controlled (both temperature and humidity). Early (April) broods of eggs and young are located in tunnels a foot or two below ground, but later broods are raised in large chambers crammed with up to 8” of thatch, just below the mound’s surface. 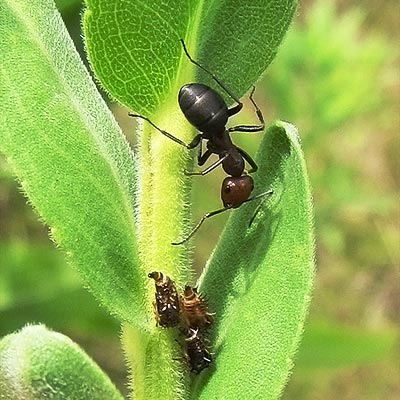 WTAs are omnivores. Their protein comes from the dead or weakened invertebrates (like grasshoppers and beetles) that they find during their travels, travels that may take them as far as 70 feet from their mound. Donald Stokes, in A Guide to Observing Insect Lives, has a blow-by-blow description of a group of ants cooperating to carry home a large piece of food. WTAs may eat some nectar and bits of plants, but most of their carbs come from honeydew excreted by sap-sucking leafhoppers and aphids. They guard their aphid “herds” from predators fiercely. Studies have shown that when large colonies of thatch ants are around, there’s a higher percentage of myrmecophiles in the bushes, too (from the Greek myrmex—ant, and the French phile—admirer). In other words, areas dominated by insect-herding ants have more “herd-able” insects, and there are more non-myrmecophiles in “ant-light” areas.

Large, densely populated WTA mounds are magnets for birds like kingbirds (which feed on the winged, royal ants) and for flickers and crows, which poke their beaks directly into the mound for a little ant-shaped protein. 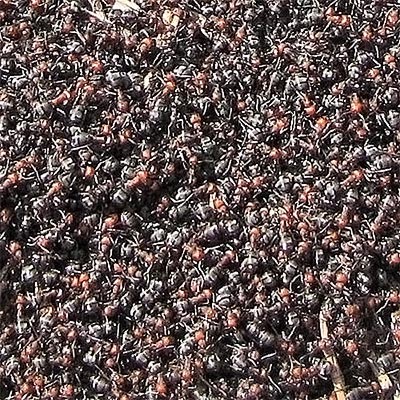 But feeding is not the only reason a bird might visit an ant mound. Years ago, there was a small Formica ant mound in the BugLady’s back yard. She enjoyed watching the birds that came down to eat and to “ant.” Anting can be active (a bird picks up an ant and rubs it over its feathers) or passive (a bird hunkers down on a mound, wriggles a bit to create a fuss, and ants climb all over the bird) (in her childhood, the BugLady was an occasional, though inadvertent, “active” anter ). Why ant (the birds, not the BugLady)? Either method results in the ants’ releasing formic acid, and formic acid kills bacteria, fungi, and mites and insect pests on a bird’s body and feathers.

Mounds may last for years or even decades. The secret? Unlike other Hymenopterans like wasps and bees, WTA colonies tolerate multiple egg-laying queens (they’re polygynous). WTAs don’t stage the massive nuptial flights of winged/virgin ants that many other ant species do. It’s speculated that this is a behavioral adaptation to living on windy prairies. The winged ants leave the mound a few at a time during the month of June, but it’s possible that rather than searching for a potential mate who has already been blown into the next county, they have already mated below ground.

Some of these now-fertile queens simply settle back in their natal mounds and start laying eggs. Others disperse, and of these, some use a little trick called “temporary social parasitism” to establish a nest. She lands on a nest occupied by another species of ant, climbs inside, and acquires the “nest scent.” The “host” workers start caring for her and then for her eggs and young. Eventually, the host ants are outnumbered, unwittingly complicit in the takeover of their own nest.

In a BOTW episode about the Edwards’ Hairstreak butterfly, the BugLady mentioned that the caterpillars of this oak savannah species are tended by Alleghany mound-building ants (AMBA) (Formica exsectoides). Both the AMBA and the WTA are found in Wisconsin, but the AMBA’s range is predominately east of Wisconsin, and the WTA is found mostly west of Wisconsin. After that episode, BugFan Ann emailed and asked how prairie fires/burns affect thatch ants.

The BugLady’s initial thought was that the space that ants clear around their mounds might act as a buffer against prairie fires, but she found a monograph written by Neal Weber in 1935 that disabused her of that notion. Weber references a previous paper from 1885 by a Rev. McCook, an early commentator on thatch ants in North Dakota (still quoted in contemporary research). Rev. McCook, despite testimony to the contrary by North Dakotans he interviewed, also proposed the mini-fire-break theory. But Weber observed that the mounds created by Formica rufa obscuripes were not protected from fire by the cleared area, were devastated by prairie fires, and may be more vulnerable to fires due to the mound’s covering of thatch. True, fires are a vital force in maintaining prairies, and thatch ants have been surviving prairie fires since they first began living on prairies. But fire kills the WTAs’ insect prey, the vegetation, and the honeydew-producing insects that live on that vegetation, and it also ignites the shallow, summer WTA nursery chambers. One study found that fires reduce ant populations by 20%.

Overall, the AMBA operates in a similar fashion to the WTA. The BugLady suspects (but can’t verify) that the following AMBA traits may exist in the WTA: