The BugLady was introduced to a new beetle species (and family) recently, and to a few new vocabulary words, and to a slightly creepy image&mdash’all-in-all, a successful bug encounter! Keep in mind that the BugLady’s youngest offspring accuses her of being an “esoterrorist”—an overly enthusiastic purveyor of trivia. This episode reveals some dynamite vocabulary words. 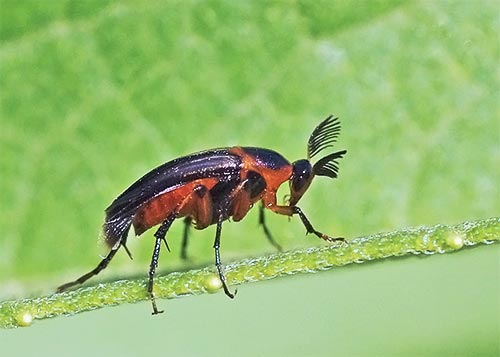 Because of its fancy antennae, the BugLady initially thought this was a fire-colored beetle (family Pyrochroidae), but it turned out to be a Wedge-shaped beetle (family Ripiphoridae—sometimes spelled with an “Rhi” instead of an “Ri”…). This particular wedge-shaped beetle (Macrosiagon limbata) doesn’t seem to have a common name. It resembles, and is close taxonomically, to the tumbling flower beetles (of previous BOTW fame). It’s in the superfamily Tenebrionoidea along with darkling, false darkling, blister, false blister, false long-horned, fire-colored, hairy fungus, cryptic fungus, and polypore fungus beetles, ironclad, broad-hipped flower, and narrow-waisted bark beetles, among others. See—beetle-namers have so much fun! 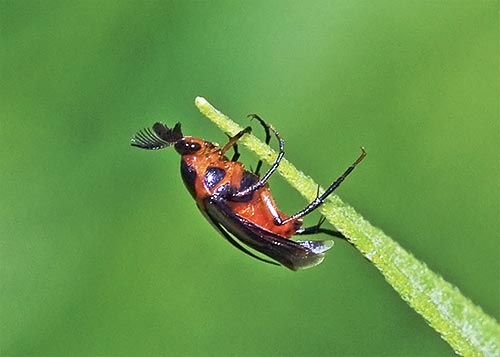 According to bugguide.net, its genus name (pronounced mac-row-see-AH-gon), means “large cheek/jaw” and it does have large mandibles. There are 11 species of Macrosiagon north of the Rio Grande and more elsewhere in the world. They are, indeed, wedge-shaped, with elytra (wing covers) of this genus about as long as their abdomen. The individuals that the BugLady photographed didn’t seem able to stuff their wings under their wing-covers completely. Males have fancy antennae; females’ are simpler. These beetles were less than a half-inch long.

What do they do for a living? The extremely ephemeral adult females hang out on flowers, where they deposit their eggs and where they may do a little nectar feeding. Like tachinid flies, of previous BOTW fame, WSBs lay their eggs on flowers in hopes that their newly-hatched young will intersect with another insect and hop on board. In the usual scenario, the larva digs in and eats its host, a little at a time, synchronizing the host’s death with its own pupation. This is the parasitoid lifestyle. Parasitoids tend to target certain species, and flower-loving WSBs specialize in solitary bees and wasps. 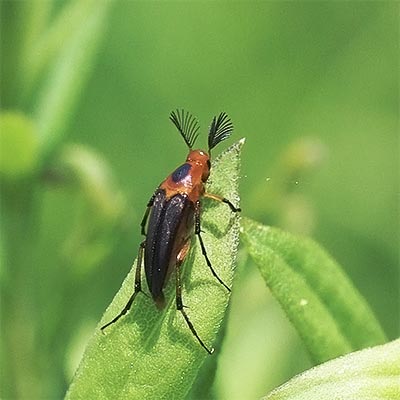 Now comes the tricky part. WSBs have put a bit of a twist on the parasitoid game plan. In the first place, the larvae are especially active, right out of the gate/egg and are called planidia or triungulin (the terms are sometimes used interchangeably, but the original blister beetle recipient of the name triungulan has three-clawed feet). The triungulin/planidia lurk, often in groups, on the flower tops, waiting for a ride. Check the picture of a bee with two, reddish triungulan near it’s abdomen. These larvae are phoretic, that is, they use adult bees and wasps as taxis without harming them.

Why? For access to the Mother Ship. WSB triungulin/planidia (not to be confused with planarians, of recent BOTW fame) parasitize the eggs and larvae in a bee/wasp nest. Some species feed on wasp or bee larvae only for a short while before exiting their host and eating vegetation.

As BugFans undoubtedly recall, metamorphosis is the growth process by which a young insect moves from egg to adult. There are two main paths to maturity. In Simple or Incomplete metamorphosis, Junior hatches looking a lot like Mom and Dad and just grows, molting five or six times and adding wings and naughty-bits as it matures. In Complete metamorphosis, the critter that exits the egg goes through a larval stage and a resting/changing pupal stage on the way to an adulthood in which its habitat, mouthparts, diet and appearance may change drastically.

In the class Insecta, parasitoids come from Orders like the flies, beetles and wasps that practice Complete metamorphosis. As far as metamorphosis is concerned, WSB larvae are over-achievers—they are hypermetamorphic, adding several stages to the larval development scheme, changing appearance and diet as they move from one stage to another.

So small. And yet so complicated. And why?