The BugLady has always been in love with wetlands – the pterodactyl lift-off of Great-blue Herons, a glint of dragonflies, the quiet splash of sun-warmed turtles sliding off a log, frogs’ exuberant announcements of spring, the rich odor of a wetland’s primordial soup.
But lately, she’s been thinking about prairies. She led a walk at Riveredge Nature Center’s excellent “Knee Deep in Prairies” celebration, and she spends a lot of quality time on the prairie because she loves its ever-changing palettes and patterns.

Early explorers had no word for the landscape they found west of the Mississippi – “prairie” comes from the French word for “meadow,” and it was surely the biggest meadow they had ever seen.

The recipe for making a prairie starts with hot summers and cold winters; stir in a little fire (set by Nature or by man) and add lots of evaporation (BugFan Dan once asked a group of 5th graders why a prairie is a prairie, and one kid piped up “because of the high rate of evapotranspiration.” Yep). Allow to sit for a long time.

There are two important dates in the history of prairies. The first is a massive drought that followed the retreat of our most recent glacier. Prairies were formed during a “dry spell” that lasted from 6,000 to 8,000 years ago – shortgrass prairies grew in the rain shadow on the east side of the Rockies, mixed-grass prairie ranged through much of the Great Plains north of central Texas, and tallgrass prairie butted up against the great Eastern forests.

Then, for five thousand years, there was a tug-of-war. Wet periods encouraged trees, and the forests marched westward. Dry periods favored the grasslands, and tongues of the prairie peninsula pushed east into (future) Michigan and Ohio, leaving prairie remnants behind when they retreated. At their peak, tallgrass prairies covered more than 200 million acres, including 2.1 million acres here in Wisconsin. Depending on climate, plant community, soil organisms, and parent material, it takes between 200 and 1000 years to produce an inch of soil, and the soil formed by the decomposing leaves and roots of prairie plants was some of the richest and deepest ever known.

The second critical date is 1837, the year John Deere invented the steel moldboard plow that allowed the settlers to turn the deep prairie sod for the first time. The 300 pound plow, pulled by eight or ten oxen, ripped through the soil and the plant roots, many of which extend more than six feet below the surface (there’s as much going on below-ground in a prairie as there is above).

The men who first turned the sod told of the eerie noise that was made as the deep roots tore – one described it as “the most sickening sound he had ever heard.” Today, much of that astonishing soil lies at the bottom of the Gulf of Mexico, and, at less than 1% of their original area, tallgrass prairies are considered an endangered ecosystem. As the poet Wendell Berry said, “We plowed the prairie and never knew what we were doing because we did not know what we were undoing.”

For the most part, Southeastern Wisconsin wants to be a forest, so establishing prairie here takes work and vigilance. And insects – by some estimates, the biomass of the insects on pre-settlement American prairies equaled that of the bison. The first director of Riveredge used to say that until the insect partnerships are established, you have a prairie planting, not a prairie.

Here are some pollinators and predators and plant feeders of the prairie – and the flowers they visit.

Two-lined grasshopper (Melanoplus bivittatus) – a large and handsome member of the spur-throated grasshopper subfamily (Melanoplinae) and an eater of plants, a sometime agricultural pest and a sometime scavenger on dead animals. Bug o’the Week – Melanoplus Grasshopper 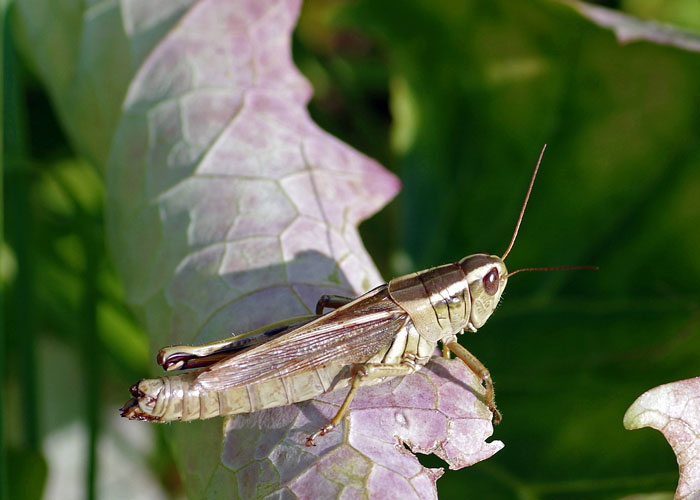 Ambush bug (Phymata sp.) – Well-camouflaged on many flower heads (but not so much on this one) this small predator regularly nabs insects many times its size. In this it is aided by pincer-like front legs and an injectable, toxic, meat-tenderizing saliva. According to bugguide.net, “Coupling may involve several males riding around on a single female. Sometimes it allows them to take down larger prey, although coupling individuals have been found each with their own prey as well.” For more information, see Bug o’the Week – Ambush Bugs. Flower: gray-headed coneflower. 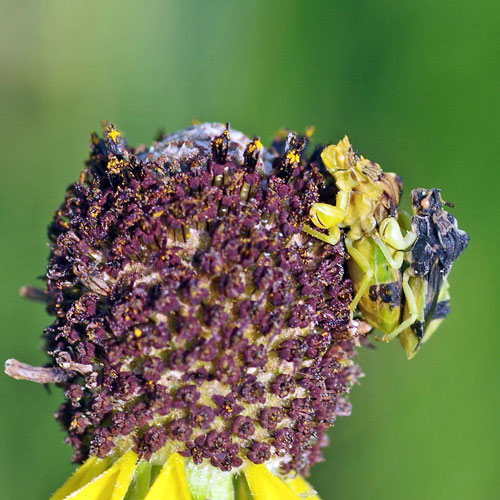 Black-horned tree cricket (Oecanthus nigricornis) (probably) – It still amazes the BugLady to find out that some Orthopterans (grasshoppers, crickets, katydids, etc.) eat meat – she would have guessed that they didn’t have a carnivorous bone in their bodies. However, tree crickets are omnivores that feed on leaves and fruits, and also on nearby soft-bodied insects. Tree crickets are raising a ruckus in the BugLady’s fields right now. For the ultimate cricket and katydid experience, try the U of Florida’s recordings of crickets and katydids north of Mexico. 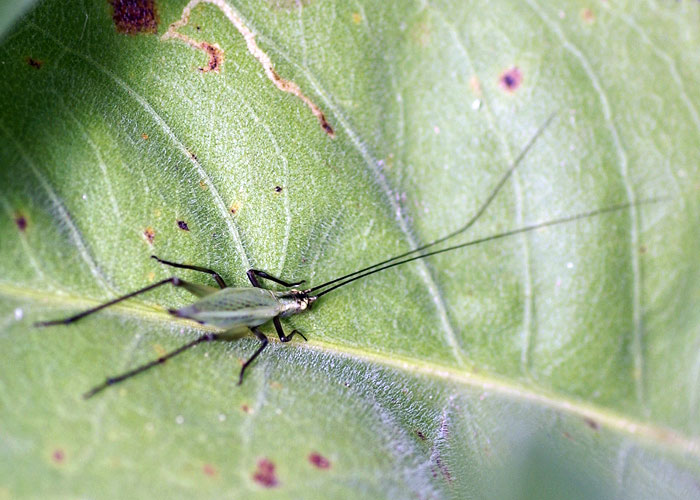 Bumblebee (Bombus sp.) – While their living arrangements are not as famous as those of the very-communal honeybee, bumblebees live socially in a (generally) less-populated nest where a queen and her brood are cared for by workers that collect nectar and pollen to feed to the developing young. Adults eat nectar. For more information see Bug o’the Week – Celebrating Bumblebees. Flower: rattlesnake master. 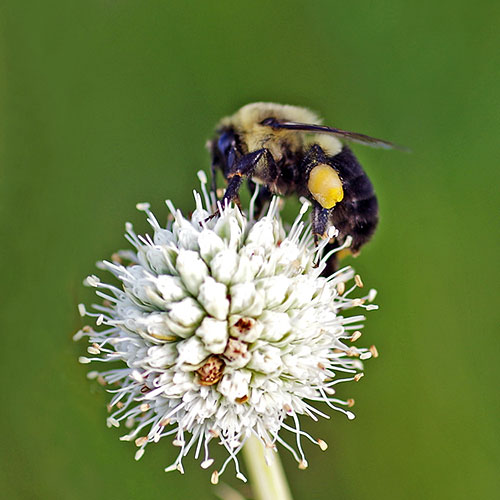 Sword-bearing conehead (Neoconocephalus ensiger) – Coneheads are large katydids that mainly feed on grass seeds. To find out why they groom their antennae so religiously, see this article by Naturally Curious web blog, and to hear what they sound like, turn your volume up and check Listening in Nature web blog. Look but don’t touch – according to the Field Guide to Insects of North America, they can bite – hard. 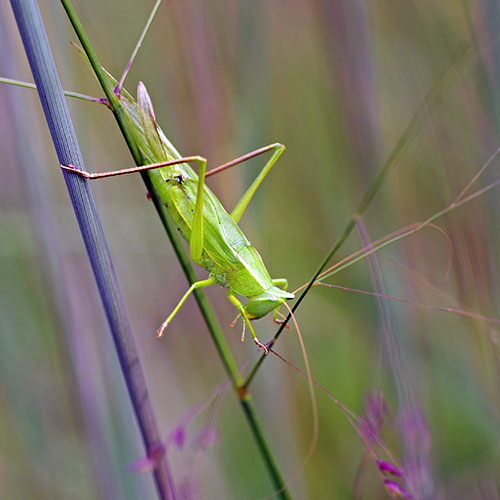 Wavy-lined emerald – The caterpillar of a delicate, green moth, while it eats other flower parts, it glues pieces of plant material to itself in hopes of escaping notice. Flower: black-eyed Susan. 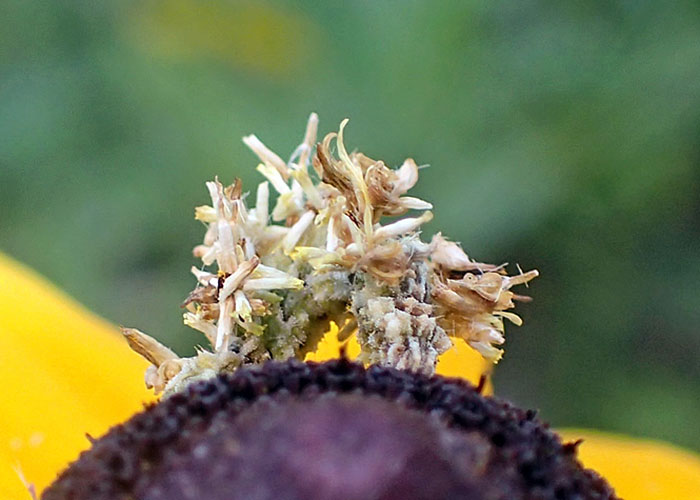 Great black wasp (Sphex pensylvanicus) – Both pollinator and predator, this solitary wasp collects a variety of grasshoppers, including bush katydids larger than the wasp itself to provision underground egg chambers. She is a nectar feeder. For more about this impressive wasp, see Bug o’the Week – Great Black Wasp. Flower: lemon horsemint. 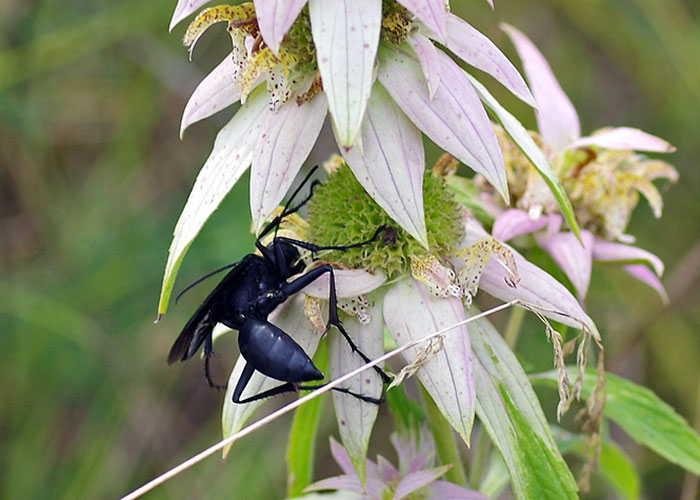 Ladybug – Most insects with Complete metamorphosis change mouthparts – and therefore diets – when they become adults. Behold, the ladybug – an aphid scourge as larvae and as adults (the little alligator-ish-looking, spotted guy on the right is a larva). This one happens to be an Asian multicolored ladybug (Harmonia axyridis). Flower: goldenrod. 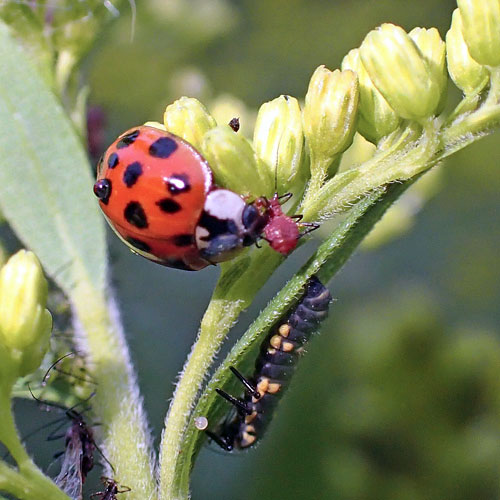 Red-banded leafhopper – Prairie leaves + sunlight = a massive amount of fuel. Leafhoppers and planthoppers are among the plant-eaters that translate plant energy into animal energy, which makes it available to meat-eaters. Leafhoppers are sap-suckers. 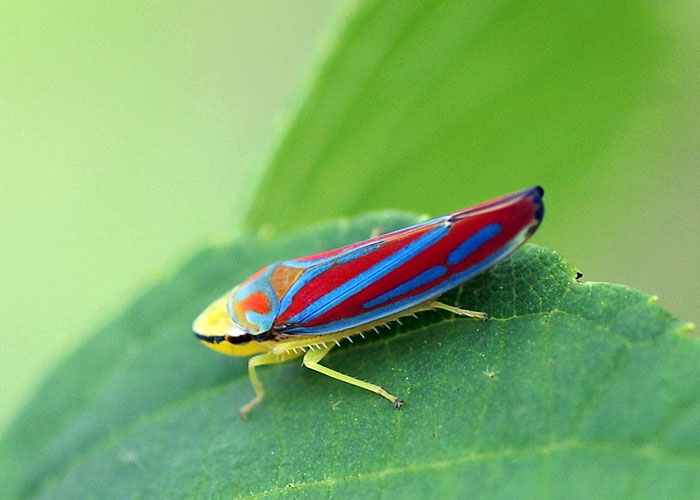 Monarch (Danaus plexippus) – Generation (Gen) 5, the Monarchs that will migrate to Mexico, are filing the air now. Like most (but not all) butterflies, they are vegetarians both as caterpillars and as adults, and they’re poisonous, to boot. Here’s a Bug o’the Week from two years ago about their status. The folks at www.monarchwatch.org are optimistic about this year’s crop. Flower: blazing star (Liatris). 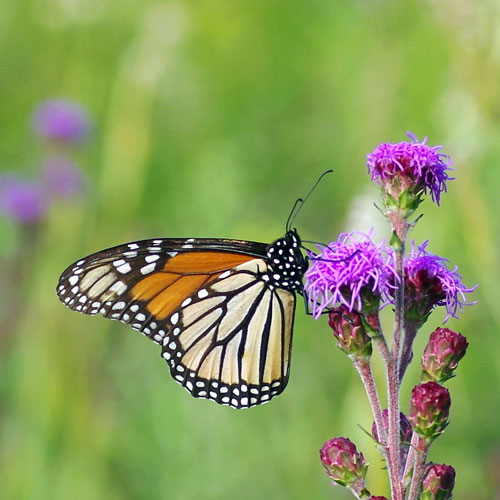 Orbweaver – True spiders in the family Araneidae, the orb-weavers are some of our more conspicuous spiders – partly because of their beautiful, webs, and partly because many get to lunker size by fall. Orb weavers are carnivores, all. Bug o’the Week – Big Orb Weaving Spiders 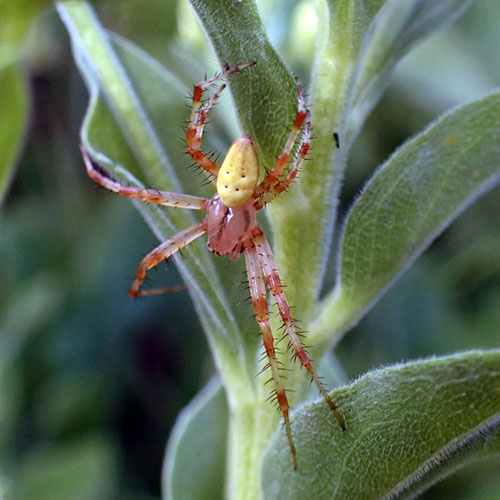 Gnat ogre robber fly (Holcocephala sp.) – A small insect (less than ½”) that hunts, flycatcher-style, from the tips of grass and leaves, this Gnat ogre lives up to its name. They are a bit more tolerant of having their portrait made than are some of the other (equally carnivorous) robber flies. 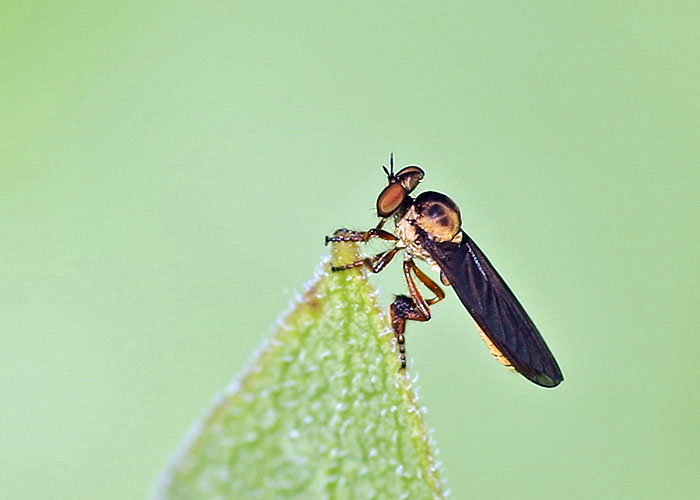 Tiger swallowtail – Although its caterpillars feed on the leaves of a variety of woody plants, adults enjoy the prairie flowers. There may be a big tie for the BugLady’s second-favorite bug, but this is her favorite. Bug o’the Week – Eastern Tiger Swallowtail Butterfly Flower: cup plant. 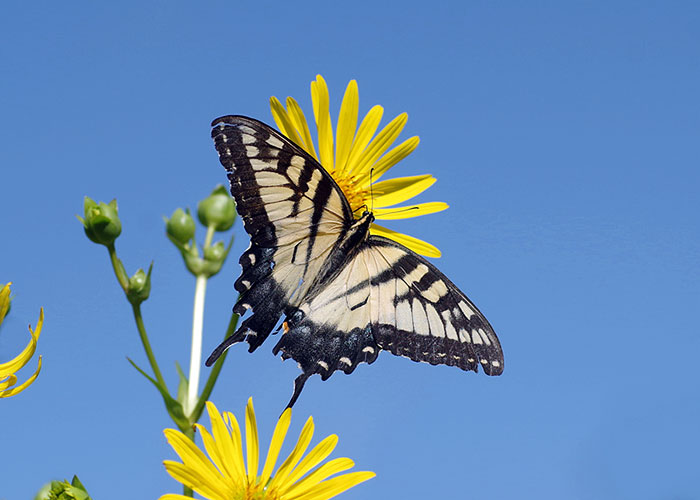 Tachinid fly (family Tachinidae) – These large and noisy flies with bristly butts are nectar-feeders – as adults. They multitask – using their foraging trips to deposit eggs on fellow flower-visitors like caterpillars and true bugs. For the hand-picked host of the fly larva, it’s all downhill from there; the larva is a parasitoid that will feed on its host, keeping it alive until the fly larva is ready to pupate. Bug o’the Week – Tachinid Fly 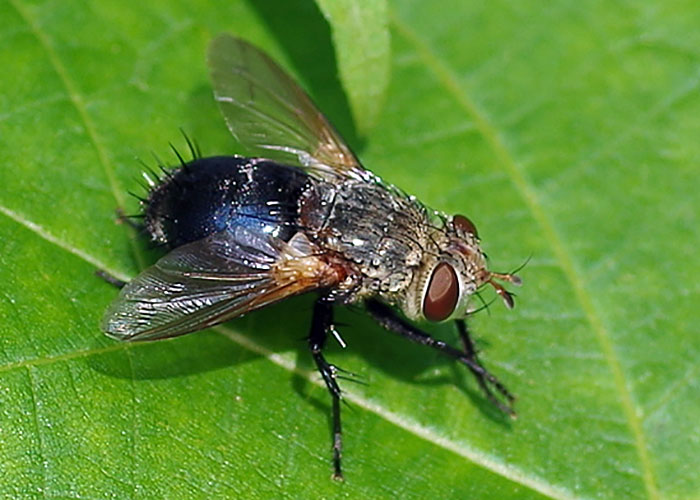 Visit a prairie near you.