Like Stinkbugs, these guys are also in the True Bug order (Hemiptera). There are two common species around here, this guy/gal, the Common Water Strider, and a half-pint species called the Broad-shouldered Water Strider, which likes riffles in streams and rivers. The kids call them water spiders, because a) grown-ups don’t enunciate; or b) loud music has caused partial hearing loss; or c) they look like spiders. In Canada, they are called “Skaters,” and in some parts of the south they are called “Jesus Bugs” because they walk on water.

Actually, they skate on the water’s surface film (the top layer of H2O molecules is “stickier” because of its contact with the open air), a phenomenon of no import to animals our size but of great import to the fly-weights among us) on tiny, non-wetable hairs on the bottoms of their tarsi (the final leg segments—their feet). According to J. Reese Voshell, Jr. in A Guide to Common Freshwater Invertebrates of North America, their claws are located above the bottoms of their feet, so the claws do not disturb the surface film. Besides skating they can dive (water repellent scales and hairs keep their bodies dry, and they can fly. The adults of the summer’s final brood overwinter at the bottom of the pond. When they are on the water’s surface, they breathe like terrestrial insects, through openings in the sides of their body. When diving, they breathe air that is trapped in the fine hairs on the surface of their body. 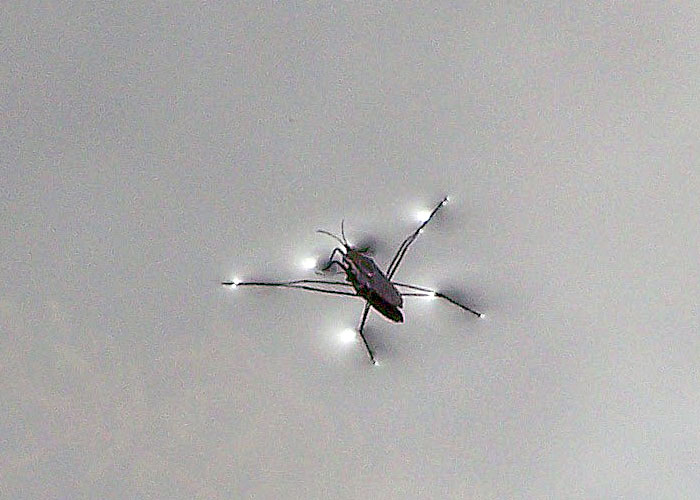 Water striders are carnivores. They use their second and third sets of legs to skate the surface film, and they grab their prey with their shorter front legs. They feed on small invertebrates that get caught on the surface film. The water strider picks up, through special sense organs in its legs, the vibrations of insects stuck and struggling on the water’s surface. They also feed on tiny animals that float up from below. They use the same “meat tenderizer” method as ambush bugs, holding their prey, jabbing it and injecting a chemical that tenderizes the innards of their prey and then slurping out the protein and discarding the “empties”.