Anyone who has watched Water Striders in action has been wowed by the four-point shadow that marks their path over shallow waters. Photographers chase them, often futilely—a literal flick of the wrist sends the wily WS out of focus at speeds of one meter per second. The BugLady first wrote about WSs in February of 2008 and decided to take a second look. What she discovered changed the episode’s rating from “G” to “PG”.

Water Striders are in the True Bug order Hemiptera, in the family Gerridae, (there’s also a family of half-pint WSs called the Broad-shouldered Water striders, Veliidae). In some cases, it takes a microscopic internal examination to distinguish one family from the other. Sources disagree about how many species we are graced with—estimates range from 45 to 85 species of Gerrids in North America and from 750 to 1,400 worldwide. Most are found on quiet or slow-moving fresh waters, but about 10 percent live on salt water. 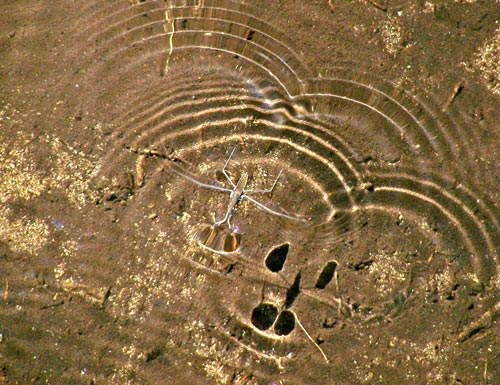 They have lots of common/regional names—water spiders (they’re True Bugs in the order Hemiptera, but if you count more than six legs, count noses too, it might be two WSs in tandem. More about that later), pond skaters, water scooters, magic bugs, water skeeters, and in some parts of the South, “Jesus Bugs” because they walk on water. Many species are long and thin. Some have wings, others are wingless, and some species have both winged and wingless forms, depending on where they live. Most measure half an inch or less, but there’s an eight-inch Vietnamese water strider that’s billed as the largest invertebrate working the water’s surface. Each pair of legs has a different task. The short, hooked, front pair catches food; the second pair rows the WS from one place to another; the third pair, the longest, may row a bit, but it usually steers.

How do they do that? The top layer of water molecules is “stickier” because of its contact with the open air. WSs skate on the water’s surface film on tiny, non-wet-able hairs at the bottoms of their tarsi (the final leg segments—their feet). According to J. Reese Voshell, Jr. in A Guide to Common Freshwater Invertebrates of North America, their retractable claws are located above the bottoms of their feet, so the claws do not disturb the surface film.” Long, thin legs allow them to distribute their weight over a larger surface. 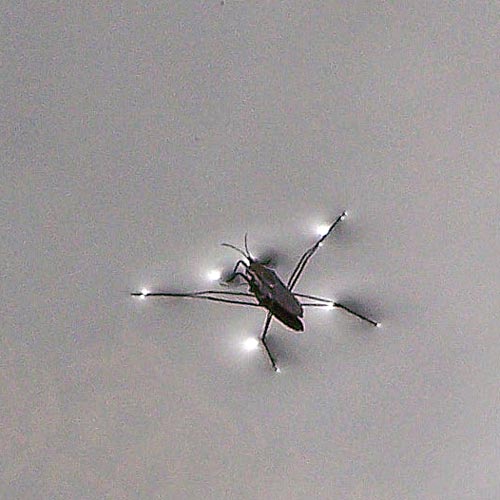 Their legs and bodies, too, are covered by hydrofuge hairpiles (water-repellant hairs, at a density of several thousand hairs per square millimeter). Raindrops and splashes of water roll off without weighing the WS down, and if by chance they are submerged, air trapped in the hairs helps them to the surface and gives them something to breathe during the trip. WSs can hop up from the water’s surface, and many species can fly. When they are working the surface film, they breathe like terrestrial insects, through openings in the sides of the body.

The folks at MIT dissected WS propulsion. The feet of the WS create tiny dimples on the water where they sit. When they locomote, their feet push down and back, forming a small indentation off of which they rebound, moving forward as if bouncing on a trampoline (for every action, there is an equal and opposite reaction—life is physics) (While they were at it, MIT researchers built a Robostrider using an aluminum soft-drink can). 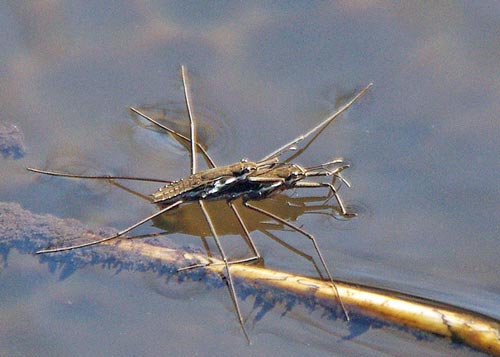 What are they doing on the surface film, anyway? A lot of eating. They have, like other true bugs, piercing-sucking mouthparts. Their prey are small terrestrial invertebrates that fall, or mistakenly fly, down onto the surface film and stick in it, sending out tiny ripples that mark their throes. WSs monitor the surface film with their front legs and skate toward the disturbance. They also feed on tiny animals that float up from below, like emerging gnats and midges. Pierce, slurp, discard, repeat.

Birds prey on WSs, and so do some other aquatic Hemipterans, but because of a nasty secretion from their scent glands, only the hungriest fish will eat them. If WS populations get dense, they may solve the problem with cannibalism.

WSs practice Simple/Incomplete metamorphosis—they hatch (from eggs laid on plants and stones under the water or near its edge) looking like mini-adults. They shed and grow over a period of about six weeks before reaching maturity, adding a few all-important adult appendages, living in the same habitat as the adults and eating the same food. The adults of the summer’s final brood overwinter at the bottom of the pond (sometimes in plant stems) after storing lipids to see them through their hibernation. Males and females defend their own territories during breeding season but abandon territories and congregate cooperatively, even sharing a “kill,” at other times of year. 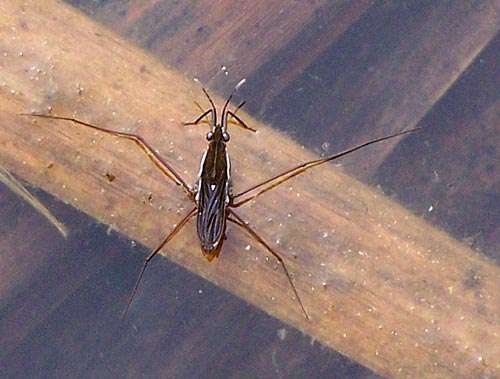 The BugLady discovered, upon revisiting the Water Striders, that they have pretty gritty sex lives. Here’s the “G-rated” version. WSs, especially males, do a lot of signaling in the form of ripples as they move about; they have ripple signals to communicate “repel” (when they want to be alone), “threat,” and courtship signals. A male in courting mode may send out a repel signal to a passing WS, and if the signal is not returned, he sends out a courtship signal. If she is receptive, he may stick with her during the whole breeding period.

And here’s the PG version: According to articles in Discover magazine in 2010 and 2012, reluctant brides of some common WS species may be blackmailed by males who skate up and grab hold. If she resists his charms, he starts tapping rapidly on the water surface. Researchers think this might have started off as a simple demonstration of his fitness, but the behavior evolved into something more sinister. Another predator of animals caught in the surface film is the Backswimmer, who hunts from below. Ripples created by the male are known to attract Backswimmers to the scene. Scientists postulate that the female, especially if she has encountered Backswimmers before, is aware of the danger (she is, after all, the one whose belly is closest to the Backswimmer—the male is shielded by her body), and she yields to the male in short order, whereupon he stops tapping. They noted that males are aware of the Backswimmer’s presence and actually tap faster when Backswimmers are around. 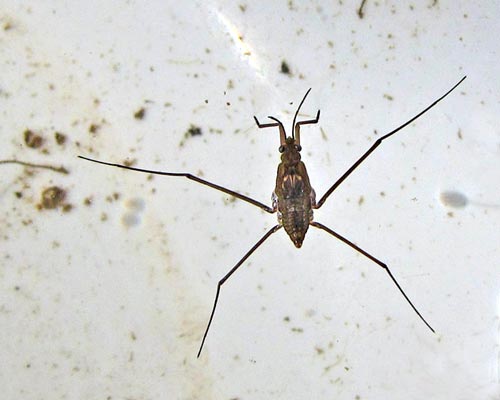 Evolution is at work again in the strategy developed by a small genus of WSs. When the male is a nymph, his antennae are only somewhat thickened, but in his final molt, the antennae develop dramatic hooks and spines that match the shape of the female’s head and eyes and allow him to grasp her more firmly (even so, seven out of eight females manage to elude him).

During her research, the BugLady rediscovered the Island Creek Elementary School website, a neat site that not only describes plants and animals but also charts their ecological relationships. The site’s motto is: “This Site is Always Under Construction!”