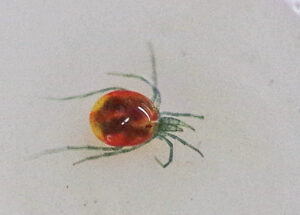 The BugLady visited her favorite ephemeral pond the other day. Frogs were singing and fairy shrimp were chugging along underwater – life is good. She’s been working on other projects recently, so here’s an episode from 2009, with some new words and new pictures added.

First-time observers of the underwater world are startled to see tiny, bright-red dots 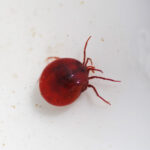 wallowing around underwater. These critters are water mites, wee spider relatives in the Phylum Arthropoda, the Class Arachnida (spiders), the Order Trombidiformes, and in a quasi-taxonomic group called Hydrachnidia/Hydarachnidae. There are some 1500 species of fresh-water-dwelling mites in North America (5,000 globally, but probably more, because they’re seriously under-studied), many of which tend to be habitat specialists.

Superficially, they look like spiders, but spiders have two body parts, a cephalothorax (combined head and thorax) and an abdomen, and the spherical water mites have a fused thorax and abdomen and a tiny head (mostly mouth).

Other physical characteristics include two double eyes (some species have an additional third eye in between, and a Vietnamese, cave-dwelling water mite has no eyes at all) and eight, short legs (most of the time). Many are startlingly red (bright red is an uncommon color in aquatic invertebrates), but species found in streams 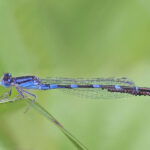 tend to be drab, and the BugLady has seen teal blue water mites. Water mites that live in quiet waters are adorned with hairs on their legs – a light-weight way to increase the surface area for swimming; mites that live in running water have strong claws instead, so they can grab the substrate and resist the pull of the current. Water mites can also be seen “walking” along on the pond floor and on submerged plants. If they stop swimming, they sink.

Water mites can get all the air they need from the water they live in, absorbing dissolved oxygen through their skin, and they can live in waters that are very low in oxygen. They’re usually found in the shallow water, but some live as deep as 100 meters and others call ephemeral/vernal ponds home, burrowing into the mud when the water dries up. They are found in open water under the ice in winter. Prime water mite habitat may contain as many as 2,000 mites per square meter. 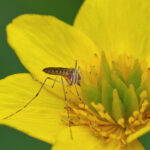 The ranks of the water mites list a few scavengers, some parasitic water mites, a few species that eat plants and detritus, and a few cannibals, but, like true spiders, most adults are carnivores that grab their prey (zooplankton, worms, crustaceans, and tiny immature insects), pierce it with their fangs, suck the juices from its body (the waters seem thick with body-juice-suckers these days), and then discard the skin and roughage. They are, in some reference books, enthusiastically consumed by fish, aquatic insects and hydras (the BugLady is confident that you recall your high school encounters with these tiny, transparent, somersaulting tree-guys). Other sources report that water mites taste bad and that predators learn to avoid them, and that that’s why they’re red in the first place.

[N.B. – when the BugLady first wrote this, she misspoke and said that water mites develop within their host’s bodies. She misread a sentence and extrapolated the fact 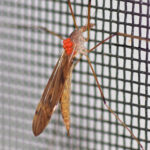 that some species may be internal parasites to mean that all were. Repent at leisure. Water mites are (mostly) meat eaters, but their feeding methods are different in different life stages. The larvae are external parasites (ectoparasites) on adult insects, and both the nymphs and the adults are predators on whatever is swimming around with them that they can tackle.] 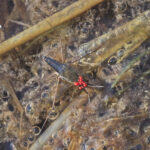 It is their childhood that is mind-boggling. Eggs, as many as 400, are laid on rocks or plants or on the neighbors – mussels and aquatic insects. Eggs hatch into six-legged larvae that attach to insects that are aquatic or whose immature stages are spent in water – stoneflies, dragonflies, true bugs (like water striders), caddisflies and flies (like crane flies and mosquitoes). Once attached, the larvae go through a parasitic phase. They probably use their senses of sight, touch, and “smell” to find their hosts. They attach to dragonfly and damselfly naiads when the naiads are about ready to crawl up out of the water to emerge as adults, and they act like ticks (to whom they are remotely related), living on the bodily fluids of their host. They drop off the naiad during that final molt and then hop aboard and reattach themselves to the new (and temporarily soft) adult skin. Female mosquitoes may not feed or lay eggs if they have too many mites, and a big load of mites lessens reproductive success in male damselflies.

In plain English, water mites start as eggs, then are larvae, then nymphs, and finally adults. An arachnologist might say that the larva attaches to a host, and, still attached to its host, the larva becomes a protonymph, and the protonymph turns into a deutonymph within the larval skin or nymphochrysalis. After a free-swimming, carnivorous stage, the deutonymph becomes a tritonymph within the imagochrysalis and the BugLady promises never to talk like that again.

Along with food, the mite may benefit if, when it matures and drops off, its host has traveled to a different pond (not go good if it drops of over dry land). Some sources viewed the mite’s hitchhiking as phoresy, but strictly defined, phoresy is the inadvertent transport of one critter by another. There’s no parasitism in phoresy.

In Summary: What’s not to love about a vivid, minuscule, aquatic parasite-predator spider relative who sucks out the very essence of its prey and whose life history encompasses egg, pre-larva, larva, protonymph, deutonymph, tritonymph, and adult?

Gray Comma Butterfly – the Other Comma