The BugLady never met a water lily she didn’t admire, and as she takes (inevitably-over-exposed) pictures of the flowers, she always looks to see who’s visiting the plant. In 2013, while she was photographing the magnificent water lily planthopper (Megamelus davisi), she also found an adult, larva and pupa of some sort of Chrysomelid (leaf beetle) on the water lily leaves, and later a pupa with a cluster fly perched on it (with no evil intent—cluster flies are nectar-feeders). That same year, the BugLady wrote an article about a beetle in the genus Donacia, also in the family Chrysomelidae, also called the Water Lily Leaf Beetle.

Chrysomelidae is a very large, diverse family of beetles that are vegetarians both as larvae (roots, stems, leaves) and as adults (leaves, flower parts). They often target specific plants and are named after them. Some are agricultural pests and some are biological controls of pest species. There are some 1,900 species of Chrysomelids in North America and 35,000 species worldwide, and there may be an equal number awaiting discovery.

So, one day, the BugLady Googled “Chrysomelid, water lily.” Ain’t the internet grand! The Water Lily Leaf Beetle du jour turns out to be Galerucella nymphaeae, formerly known as Pyrrhalta nymphaeae. It’s found throughout North America, wherever its host plants grow, and in northern Europe. Evans, in Beetles of Eastern North America, describes its range as “Europe; widely established in North America.” 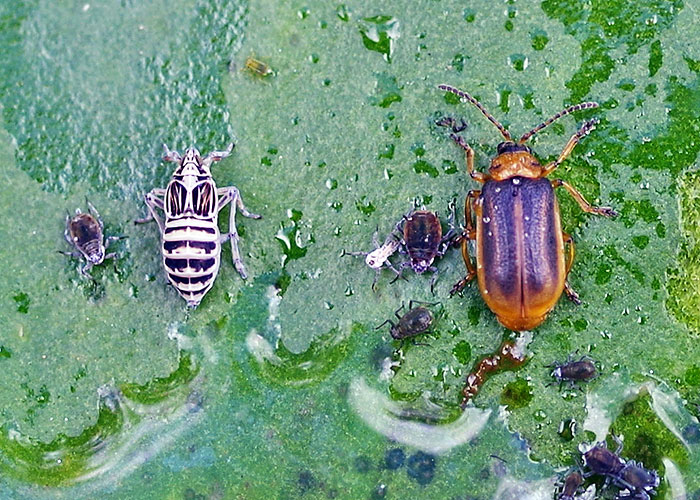 It feeds primarily on water lilies (Nuphar and Nymphaea) and smartweeds (Polygonium); each of the two distinct plant families presents unique feeding challenges, and it has been suggested that there are two, specialized races of WLLBs, with slightly different sizes, colors and jaw widths. A study in which larvae were mixed and matched with either food plant showed that not all host plants are created equal—beetles preferred, grew faster on, and had higher survival rates on their natal plants. Selection is reinforced by the fact that they mate and lay eggs there.

The BugLady’s first (stray) thought, when she saw the pupa on the water lily leaf, was, “Hmm—wonder how that got there.” Her second thought was, “Well, Duh (head smack), it hatched there!” And, her third thought was, “pretty safe spot to grow up.” Alas, not so. The beetles’ feeding—they chew little holes and trenches into the top surface of the leaf—hastens the decay of the leaf and makes it, like a boat with holes, less buoyant. A leaf that’s just one-quarter eaten can become unusable, and they may literally eat their island out from under themselves. This happens sooner rather than later if there are several larvae present, and the only escape is trekking to an adjacent leaf. 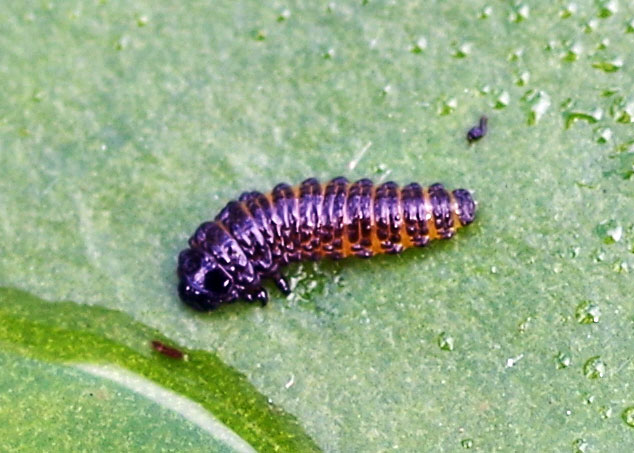 Female WLLBs lay their eggs above the water, a few per leaf, and they prefer to oviposit on younger leaves because these leaves allow optimal weight gain for their offspring. The eggs hatch about a week later, and the clock is ticking. Since the average leaf lasts less than a month and a larva needs more time than that to mature, emigration is a given; no matter what the population density, and the larvae start spreading to different leaves at a young age. Grazing/defoliation causes some kinds of plants to produce more leaves, but this isn’t true of water lilies.

There are probably two generations per year, with the second overwintering as adults.

Adults are listed as “semiaquatic,” they’re found on leaves around the edges of shallow wetlands. How do they get around? Researcher Haripirya Mukundarajan, who studied the physics of the beetles’ movement over the water, calls it “waterskiing.” The WLLB lifts its middle pair of legs, raises its elytra (wing covers), angles its body upwards, and uses its flying wings to scoot along the surface film at a half-meter per second (500 km/hour in human terms). It’s reminiscent of a diving duck running across the water in order to gain lift, but the beetle has no intention of taking to the air. The beetles, says Ms. Mukundarajan “move so fast that they interact with the ripples generated by their own motion, which increases drag and causes a bumpy ride. It’s as if surface tension acts as a pogo stick that the beetle is jumping on.” According to the study, the beetles’ strong wings “allow them to produce a lot of lift while counteracting drag from the surface. And their legs are covered with tiny hairs that repel water while a claw at the tip is hydrophilic [water-loving], allowing them to pin themselves to the surface of the water. This structure is critical for the beetle to maintain its level exactly on the water surface.” See the video below from the New Scientist. Practical applications? According to the article, “understanding the motion of the beetles could help us develop robots that move across water quickly. Many current designs are based on water striders, which move more slowly.”

The WLLB comes from a distinguished lineage. According to bugguide.net, the “beetles have been raised in the lab on Purple Loosestrife (Lythrum salicaria),” and two European Galerucella (“Cella”) beetles, Galerucella pusilla and Galerucella calmariensis, are presently being raised for release on purple loose strife on these shores.

And then there’s water chestnut, an invasive aquatic plant in Northeastern North America whose seed pod you do not want to encounter while barefoot. The WLLB has been suggested as a control for Water chestnut. In a study to determine whether Galerucella birmanica, a related beetle from Asia, should be introduced to control water chestnut, the native beetle acted as a testing surrogate. Turned out that Galerucella nymphaeae larvae were eaten with gusto by backswimmers and by a ladybug called the spotted or the pink spotted (but not the pink-spotted) lady beetle, preventing larval populations from rising to the levels needed for biocontrol. It didn’t help that while larval Galerucella nymphaeae will feed naturally on water chestnut, their survival rate there is very low. Water chestnut leaves are small and get eaten faster, which results in more frequent leaf-switching, which results in more larval drownings. Also, adults reared as larvae on the exotic water chestnut reverted to native plants when given a chance. Back to the drawing board (but, the BugLady is heartened that these experiments were carried out, rather than simply importing the Asian species and throwing it out into the field to see what would happen, like we did in the bad old days).

A European study painted a picture of coots, swimming among the water lily leaves, picking the beetles/pupae/larvae off of the leaves.