The BugLady has been seeing Viceroy butterflies recently—what a treat! So, here’s an enhanced version of a BOTW that first appeared seven years ago.

Viceroy butterflies (Limenitis archippus) are found in the family Nymphalidae, the Brushfoot butterflies. This group is often called the “four-foot” butterflies because they carry their short front legs tucked up against their body and walk on the other four. The Viceroy’s name comes from the fact that, while it is similar to the Monarch and the Queen butterflies, it is smaller, and by extension lower in rank in the British peerage. Its genus name Limenitis comes from the Latin word for marshes. Viceroys enjoy shrubby and open fields and wet meadows throughout the U.S. (they’re less common in the Great Plains), north into Canada and south into central Mexico.

There are two or more generations of Viceroys per summer (depending on your/their latitude); first brood adults feed on sap flows on tree trunks, carrion, scat/droppings, and aphid honeydew, while those from later broods are more likely to chow down on nectar from a variety of flowers and on decaying fruit. They also take in minerals from the clay of roads.

Males bask on leaves, scanning their horizons for females, and they will chase intruding males for considerable distances up into the sky.

Female Viceroys lay just a few eggs per plant. When the eggs hatch, the tiny caterpillars eat the shells of their eggs. Newly-emerged stinkbug nymphs do this, too, thereby picking up bacteria—left on the shells by their mother—that will help them digest plant materials. The BugLady found several explanations/guesses about Viceroy egg-eating behavior—to keep predators from spotting the egg/caterpillar; to harvest the protein in the egg; and to obtain nutrients that will be needed when the caterpillar matures and lays its own eggs. Willow is the caterpillars’ preferred food, but they’ll also eat poplar and aspen and have been seen on members of the rose family. Salicylic acid in the willow leaves is sequestered in the caterpillar’s body.

Viceroy caterpillars feed at night and hang out more-or-less in plain sight on leaf midribs during the day, and they’ve developed a curious behavior to confuse potential predators—they put together a “decoy bundle.” Let Anna Botsford Comstock, naturalist extraordinaire, explain it in an 1898 article called “Insect Domestic Economy”

…the viceroy caterpillar is a night feeder and he uses the denuded leaf-stem for a perch during the day. Stretched out lengthwise on this during the day, he is nearly invisible in his earlier stages. Besides this he uses a very ingenious device to distract the attention of bright eyes from himself; he fastens with a silken thread, which he secretes from glands near his mouth, a bunch of debris [including leaf bits and frass, says another author] to the bare midrib just above the feeding place; as he gnaws off more of the leaf, he moves his little decoy bundle farther down the stem. This is a clever performance, for if one of his foes should be hunting about this leaf and should start out on the denuded stem, it would meet with this empty and worthless mass to begin with and naturally be discouraged from farther [sic] investigation.

Alternately, since some parasitoids locate caterpillars by following a trail of frass, another source speculates that a ball of frass hanging in plain sight may keep them discovering the caterpillar.

The early broods live out their life cycles in a few months, forming a chrysalis when it’s time to transform into an adult. But the larvae of the final brood of summer do things a little differently—they overwinter as tiny caterpillars, wrapped in leaves of one of their food plants. Donald W. Stokes, in A Guide to Observing Insect Lives, describes how the caterpillar shapes a leaf into its hibernaculum, according to pre-programmed specifications. It eats the leaf from the tip down, sparing the midrib. Then it rolls the remaining bit of leaf into a cylinder a half-inch long and an eighth-inch wide, securing it with silk. It lines the inside of the leaf with silk, and, although the leaf is still attached to the shrub, it wraps silk around the leaf stem (petiole) and secures it with a band around the twig so the leaf will not fall in autumn. When it crawls in, the final segment of its abdomen forms a living operculum.

The caterpillar that re-emerges in spring has catkins and new leaves to feed on; it finishes growing and forms a chrysalis in spring. Viceroys are closely related to the Red-spotted Purple/White Admiral butterfly (Limenitis arthemis) (the Red-spotted purple and the White admiral species have been lumped and are sometimes called the “Red-spotted Admiral”). Admiral caterpillars overwinter in the same fashion as the Viceroy’s, are also bird-poop mimics, and are so similar to Viceroy caterpillars that only their mamas can distinguish them for sure.

As Pyle points out in The Audubon Society Field Guide to North American Butterflies, Viceroys seek protection in each life stage by disguising themselves as something else. Eggs resemble galls on willow leaves. As the caterpillar molts and matures, it looks increasingly like a glob of bird poop (for another champion bird-poop mimic, Google the “Beautiful wood nymph moth.” If you forget to add “moth,” the BugLady is not responsible for the sites you’ll get to). A Viceroy chrysalis continues the bird-poop theme. Adult Viceroys are famous for being mimics of Monarch butterflies, of previous BOTW fame. 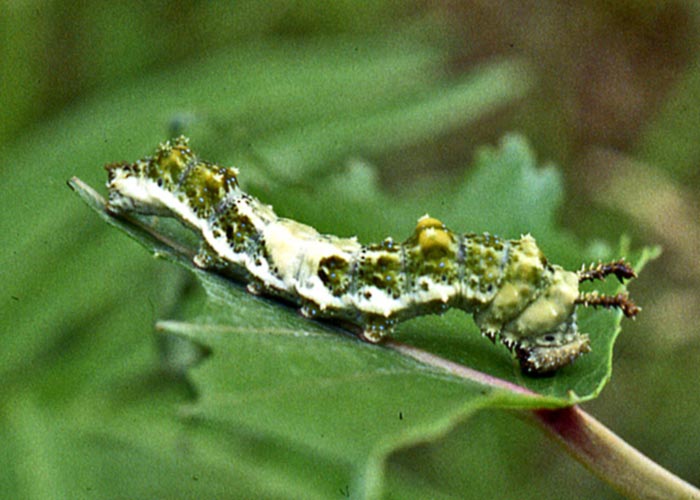 There are lots of websites dedicated to telling the difference between a Monarch and a Viceroy. Long story short, Viceroys (except a Mexican subspecies) have a “C-shaped” black line across their back wing that is visible from above or below. Monarchs are larger, and they tend to flap and soar, holding their wings up in a loose “V,” while Viceroys fly with faster wingbeats, and when they soar, their wings are held more horizontally.

Ecologists have long preached that Viceroys have enjoyed a Batesian “Get-out-of-Jail-Free” card due to their resemblance to the toxic Monarch butterfly. Monarchs are poisonous because their caterpillar host plant, milkweed, contains harmful cardiac glycosides (Batesian mimicry—the harmless imitating the harmful). Recent research suggests that because willow leaves are very bitter, the Viceroy may be almost as distasteful as Monarchs. In that case, Monarchs and Viceroys are mimicking each other, each cashing in on the other’s bad reputation (Mullerian mimicry). 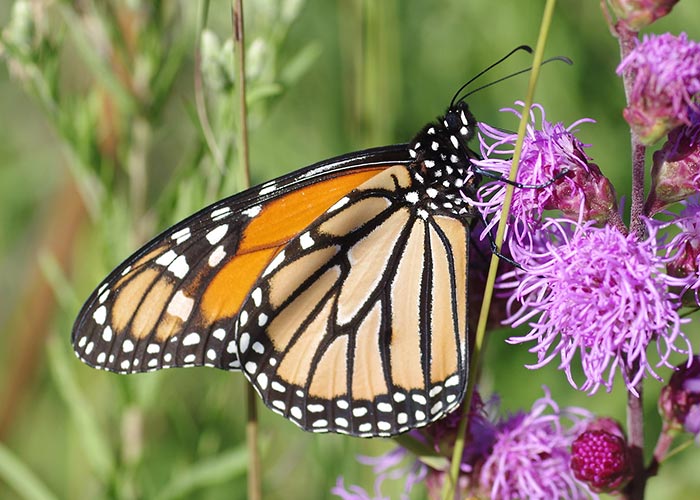 As mimics go, the Viceroy is a flexible one. Monarchs do not occur in the far southeastern or southwestern United States during the summer, so what’s a Viceroy to do? No worries—it turns out that the Monarch’s close relative, the Queen butterfly does, and a Florida and a Southwestern subspecies of Viceroys are Queen mimics. The Viceroy is apparently more noxious than the Queen.