Earlier this summer, the BugLady was wondering about the value of mimicking a velvet ant in an area where velvet ants are absent. Two months later she found out—there are velvet ants around! Other people knew—Jonathan Neal wrote in his livingwithinsects blog about encountering VAs at the “Wisconsin ‘Desert’ Prairie” (The beautiful Spring Green Preserve). Publish in haste; repent at leisure.

At the end of August, when the BugLady was walking slowly up a sandy trail at Riveredge Nature Center to check for a feeding swarm of Common Green darners, she noticed a very colorful “ant” zipping across the sand. The busy, perpetual motion of the “ant” rang a very distant bell, and she had an OMG moment. 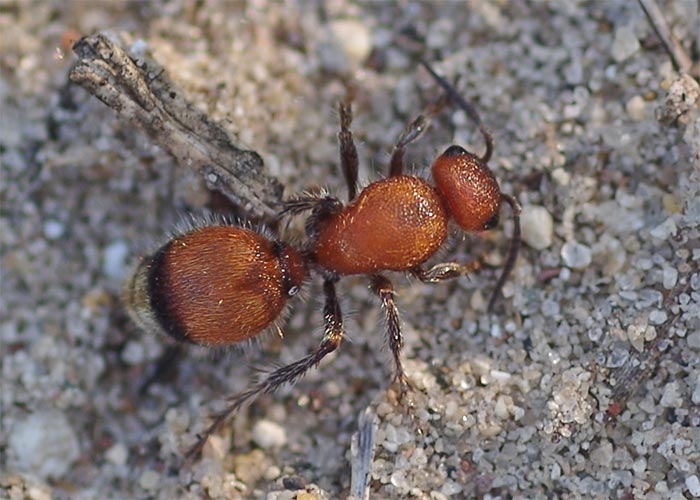 Velvet ants, as every on-line and paper resource tells us up front, are not ants at all, but are flightless female wasps in the family Mutillidae (and like ants, they’re in the order Hymenoptera). Most of the on-line information is about the large, furry, very impressive eastern species, Dasymutilla occidentalis, whose sting is so painful that its nickname is (probably hyperbolically) “cow killer ant.” Their sting is ranked at a 3 out of 4 on the Schmidt Pain Scale and is considered painful, but not dangerous/venomous.

[Digression: Entomologist Justin Schmidt, that connoisseur of pain, devised a scale to evaluate Hymenopteran stings that starts at zero (unable to puncture skin) and maxes out at five (he hasn’t assigned a “5” yet, but the Central American bullet ant earned a 4+ and Schmidt’s comment “Like fire-walking over flaming charcoal with a 3-inch rusty nail grinding into your heel.” By comparison, sweat bees are a 1 (“Light, ephemeral, almost fruity. A tiny spark has singed a single hair on your arm.”); fire ants a 1.2 (“Sharp, mildly alarming. Like walking across a shag carpet and reaching for the light switch.”) (He’s talking about a single bite, but nobody gets bitten by just one fire ant); honeybees a 2 (“The sensation is like a match head that flips off and burns on your skin”); ditto yellowjackets (“Hot and smoky, almost irreverent. Imagine W. C. Fields extinguishing a cigar on your tongue.”); and paper wasps a 3 (“Distinctly bitter aftertaste. Like spilling a beaker of hydrochloric acid on a paper cut.”). (The BugLady is not making this up. Really!). For more on insect stings, see Discover‘s Stung. 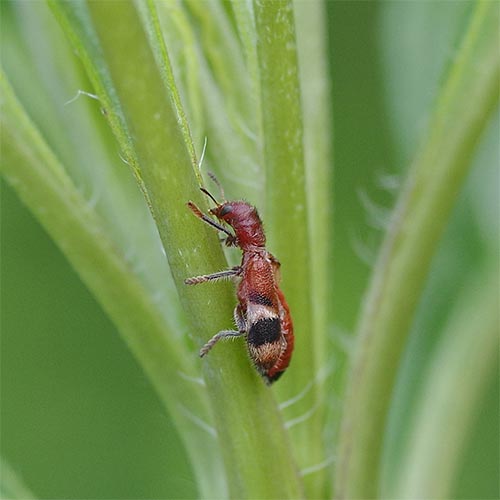 The BugLady’s VAs are a thatch ant-sized species (a shade less than one-half-inch) that she suspects may be Dasymutilla vesta, based on pictures and general range. [Quick digression: The BugLady wishes that more states had a comprehensive on-line Insect site like Minnesota’s wonderful Cedar Creek Insects]. If there is such a site in Wisconsin, she hasn’t stumbled across it yet.]. VAs are found in dry habitats where their host species build their nest tunnels, and they have extra-tough exoskeletons that help to prevent internal water loss in their xeric surroundings. Most of the 400+ North American species are found in the desert Southwest and Mexico, but VAs can be found throughout the Upper Midwestern and Western states and north into Canada. Away from the desert they occupy sandy-soiled fields, lawns and cemeteries.

A VA’s “waist,” between its thorax and abdomen, is not as constricted as an ant’s, and its antennae are straight, not “elbowed” like an ant’s. Female VAs are wingless, and the winged, males, harmless and short-lived, look “waspy” (sexual dimorphism). The sexes look so different, in fact, that it can be very difficult to match up males and females of the same species in insect collections unless they’re captured flagrante delicto. There are a number of VAs in several genera that have this general color scheme – red and black being one of Mother Nature’s warning combinations. These are solitary wasps (no queens, workers, or drones). 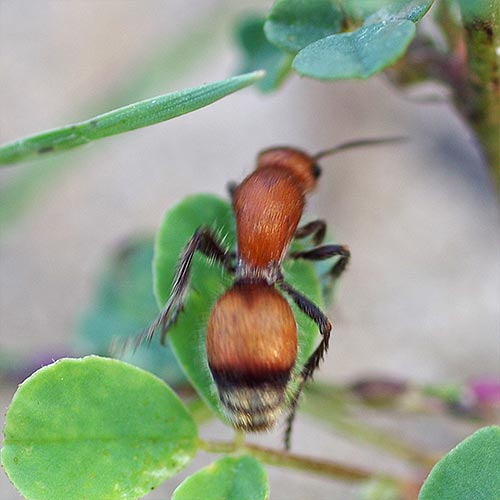 When a male VA is feeling amorous, he takes to the air, scouting from above (males of some species stage large courtship aggregations). It is theorized that he uses sight and smell to locate her (she gives off attractive pheromones), and possibly, hearing; both male and female VAs produce sound by “stridulation,” rubbing together rough areas on the second and third abdominal segments. He swoops down and, in some species, picks her up—mating may happen in mid-air – after which she continues her ceaseless hunting, looking for concealed tunnels, tapping with her antennae.

When she finds the tunnel of a ground-nesting bee (whether solitary, like herself, or colonial, like a bumblebee), she enters it, locates a pupa (she sometimes targets the pupa of a cockroach, moth, beetle, or fly), stings it, and then deposits an egg in the host’s pupal case. That strong, desiccation-proof exoskeleton stands her in good stead; if she encounters the nest’s (hostile) rightful owner, she is impervious to the stings. Her armor protects her from predators and also from entomologists, who find it difficult to impale a VA on an insect pin.

Her young are classified as ectoparasitoids—they feed on their hosts from the outside, and develop quickly, timing the death of their host to coincide with their own pupation. VA larvae are considered pests when they go after native pollinators, and biological controls of pests when they feed on white grubs. Because she is a “cuckoo” that lays her eggs and then leaves, she lacks the strong mandibles needed by other wasps to tenderize food for their young. Adult VAs feed on nectar.

Her ovipositor doubles as a stinger, and it’s a formidable weapon, indeed (one source referred to her stinger as “concealed.”). It’s long and maneuverable: she can angle it whichever direction she wants and keep on stinging until she gets the job done. She may stridulate when she’s upset and before stinging. 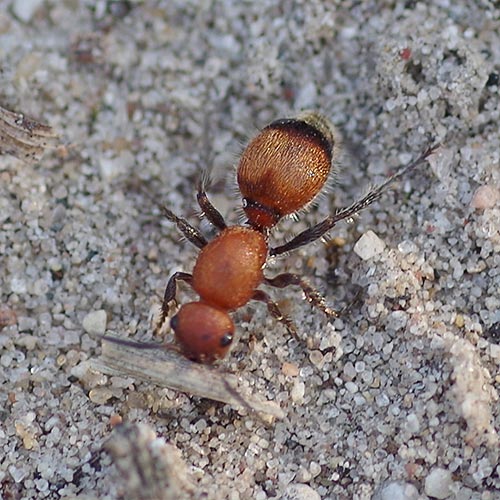 Naturalist Edwin Way Teale wrote about being stung by a VA in his youth, “I was holding it, trying to decide what it was, when it went into action. The effect of its sting was like a series of powerful electric shocks following each other in quick succession.”

The BugLady expected the exterminator sites to have a field day with VAs, but the ones she looked at were pretty laid-back. Don’t go barefoot. Educate the kids. Relocate excess VAs. Apply grass seed and deprive the ground-nesting bees of a nesting site. Chemicals are useless, because there are no VA nests to treat. And, over and over, Leave them alone.

Are the BugLady’s pictures a touch out of focus? As Ted MacRae says in his beetlesinthebush blog, “As a caveat, I shall add that this mutillid was the… most… uncooperative… insect… that I have ever tried to photograph! They really never stop moving, so you have to track the moving insect through the lens and fire shots when you think you’ve got it centered and focused. Most of the time you don’t! ”

A reminder that last week’s BOTW was sent from a different email address (the BugLady’s first encounter with computers, back in the early ‘70’s when they took up the whole wall of a small room, was not a happy one, and she is convinced that, in the Race Memory of all computers, the experience is still stored). If you didn’t see it, check your spam/junk mail, and it will be posted at the Field Station website soon.