The BugLady found this striking spider at Riveredge Nature Center one early summer day. What it lacks in size (it’s less than ½”), it surely makes up for in beauty (thanks for the ID, BugFan Mike).

There’s not a lot of information out there about the Variegated spider (Sergiolus capulatus). Only one source gave it a common name, but most of the other species in its family don’t have common names, either. It is found across the eastern US from the Atlantic to the Great Plains, usually on the ground, under leaf litter, and in grasslands, open areas, and in sunny spots in deciduous woods. It favors dry habitats over moist ones. 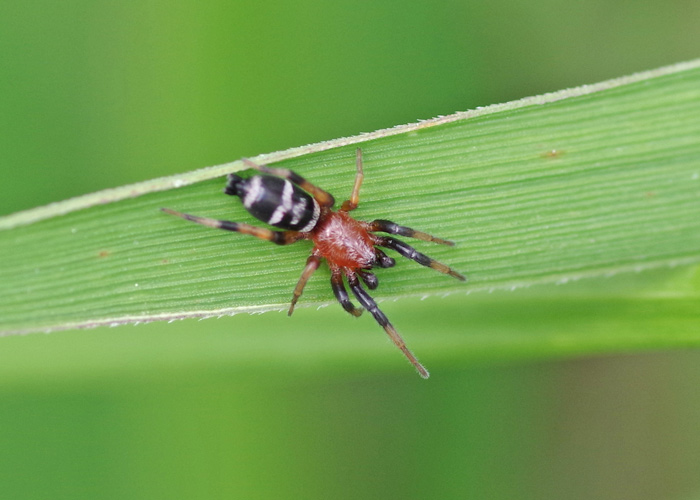 Except for a few genera, its family members tend to be drab, and all of them sport conspicuous twin spinnerets at the end of their abdomen. Scientists speculate that the Variegated spider’s color pattern mimics that of some species of velvet ants that can be found in the same neighborhoods (a velvet ant picture is included here). Velvet ants (family Mutillidae) are actually flightless, female wasps whose stingers pack quite a wallop. Nobody messes with velvet ants. 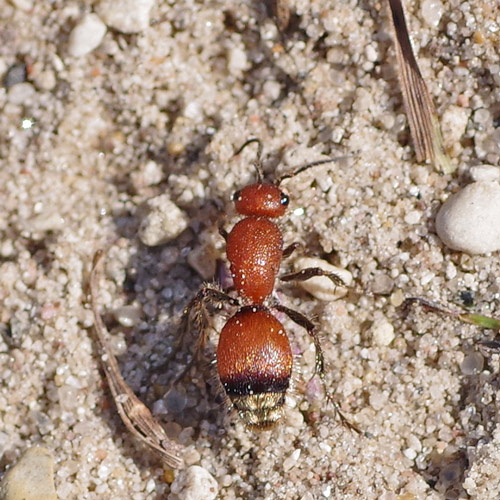 Like crab spiders and jumping spiders, Variegated spiders do not spin an elaborate trap web; they stalk their prey on foot (more about that in a sec). Most sources call them nocturnal, but a few disagreed, calling them diurnal (daytime) hunters. In any case, they spend their “down” time, and cooler days and nights, in a snug, silk-lined retreat.

The BugLady started finding good stuff (most of the good stuff is silk-related) when she researched the family rather than the species. Variegated spiders are in the Ground spider family Gnaphosidae, aka the Flat-bellied or Stealthy ground spiders (one source said that Gnaphosidae is Greek for “living in the dark”). There are about 2,000 species in the family; just over 300 of those are found in North America, where there are more species in the west than in the east.

To review, spiders are capable of making different kinds of silk for use in different situations, like egg cases and trap webs and balloons and shelters and safety nets and more https://uwm.edu/field-station/the-wonders-of-webs-i-spider-silk/. Not all spiders have or need all the options, and producing silk is “expensive,” energy-wise.

Ground/Gnaphosid spiders often go after prey that is as large as or larger than they are, like ants, and their fellow spiders (araneophagy). It’s dangerous – a predator can get hurt in a wrestling match, and some prey may be venomous – but ground spiders have developed an impressive strategy for subduing struggling prey. It’s called a “swathing attack.”

A hunting Gnaphosid spider approaches its prey and typically tries to make some tactile contact with it. That touch allows it to gauge whether or not it will be able to subdue its food without a fight (by wrapping it in a “leg basket”). If it does need to deploy silk, it targets the prey’s legs and mouth with thick, sticky globs of silk. In an article in the Journal of Experimental Biology, researchers Wolff, Řezáč, Krejčí, and Gorb called it “hunting with sticky tape” (http://jeb.biologists.org/content/220/12/2250).

They point out that food-getting drives many adaptations. Some animals avoid “risky prey,” but Gnaphosids have developed a modified spinning apparatus that produces an especially gluey silk that that is both stretchy and strong. It allows them to immobilize prey very effectively, but at a cost. When foraging spiders like Jumping spiders or Crab spiders launch themselves at their prey, they first attach a bit of web to their substrate; if their lunge takes them over the edge of a leaf, they’ve got an anchor/dragline. Dragline silk also functions in navigation, communication, trap-web construction, and egg sac suspension. Gnaphosid spiders aren’t able to make dragline silk, but it doesn’t seem to have bothered them much – Gnaphosidae is the 7th-largest spider family, and its members are especially dominant in dry, open areas.

Ground spiders use a different kind of thread to make a sac for their eggs, and females stand guard until the eggs hatch, like the closely-related Clubionid spiders. They also weave silk into mesh-like shelters that they stay in when they’re not hunting.

Here are a couple of neat spider sites: https://www.emporia.edu/ksn/v55-december2007/ and https://fieldguides.fieldmuseum.org/sites/default/files/rapid-color-guides-pdfs/390_1.pdf.