The BugLady found this handsome dragonfly at a local Nature Preserve a few days ago. Her photographic philosophy (necessitated by her hyperopia) is “Snap First and Identify Later;” so she appreciated the beauty of this spiffy individual in the moment, and she appreciated it even more later when she discovered that she was looking at a Variegated Meadowhawk. When the BugLady wrote her comprehensive BOTW about Meadowhawk Dragonflies in the summer of 2009, she had never seen a Variegated Meadowhawk (Sympetrum corruptum). Sympetrum means with rock and may refer to the rocks and other substrates that meadowhawks perch on to gather heat early in the day (VMs spend more time perched horizontally on and near the ground than do other meadowhawks). She kept thinking as she stalked this dragonfly that it sure looked and flew like a meadowhawk (and Wisconsin just doesn’t have that many red dragonflies), but that meadowhawks are not due on the landscape for months. 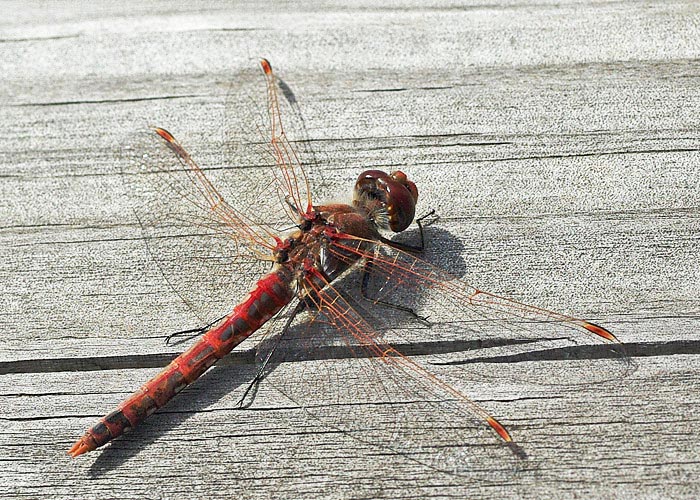 The medium size body (about 1 ½”), patterned abdomen (possibly the reason for corruptum, which comes from a Latin root meaning to break), tinted veins on the leading edge of all four wings, stigmas (pigment dots at the wing tips) that shade from pale to dark to pale, and yellow spots on the sides of the thorax mark it as a Variegated Meadowhawk, though individuals can vary in both color and size. Where the male has red markings, the female and the newly-emerged juvenile are gold. They become more solidly red with age. Meadowhawks are in the Skimmer family Libellulidae.

Generically, adult meadowhawks may be found hunting away from water or hanging around the lake shores and ponds where they will lay their eggs in late summer (the feisty male Variegated Meadowhawk is unusual because he defends a territory over his pond). Instead of hatching right away, eggs of resident meadowhawk species spend the winter in a state of suspended animation called diapause and put off hatching until spring. Meadowhawk young, which are hooked and spiny, are called naiads (though VM naiads have very few hooks or spines on their exoskeletons). They feed underwater for a few months on aquatic invertebrates, and maybe on a few tiny tadpoles and fish, until one fine evening when they crawl out of the water to complete their transformation into adults. Some meadowhawk species in cold northern waters are naiads for a few years. Aerial adults feed on soft-bodied insects that they grab out of the air.

Variegated Meadowhawks have tweaked the meadowhawk model a bit more.

They are migratory meadowhawks, repopulating the North Country in spring. Variegated Meadowhawks have been recorded in 43 states plus the southern tier of Canada, but they are far more common on the other side of the Mississippi and are considered vagrants or migrants east of the Big River. In Wisconsin, VMs are listed from about a dozen counties, and sightings peak during their spring arrivals and their July-August departures. Do they go back where they came from at the end of their season here? They do not. Joined by other Variegated Meadowhawks that have drifted into the state from the west during mid-summer, the offspring of the VMs that stopped to breed here head toward the Atlantic in late August. They leave no young in Wisconsin ponds.

Variegated Meadowhawk migrate, often in the company of darners and saddlebags, along the East coast as far south as Honduras and Belize (they also occur, inexplicably, in Southeast Asia). The next generation heads north in spring, immediately after becoming adults. Most VMs seen here in spring are adults; most VMs seen in fall migrations are juveniles. 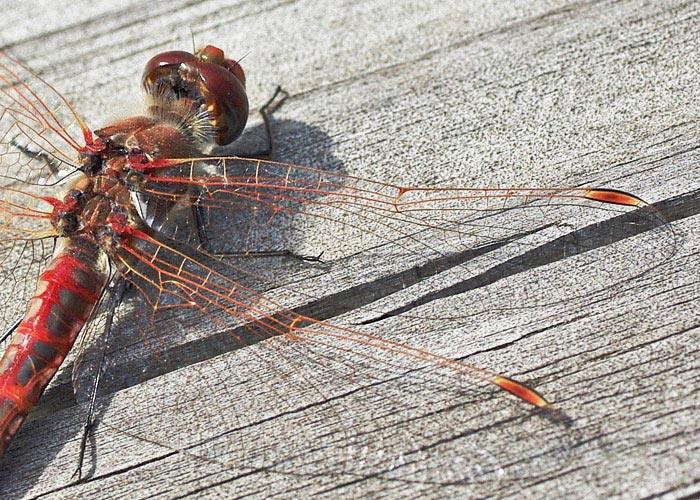 Variegated Meadowhawks are early meadowhawks. While most of their meadowhawk cousins appear in late July and fly through the first frosts, VMs arrive, as this one did, as early as mid-April. Legler, in Dragonflies of Wisconsin, says that “hot days in spring with southerly winds bring them into the state.” In some parts of their range, they are the first dragonflies on the scene. Like VMs, Wisconsin’s first Green Darners are also early spring migrants that lay eggs in our waters and then die at the start of summer, just as the native, non-migratory Green Darners emerge and replace them. The offspring of the migratory Green Darners mature and fly south in late summer, while the naiads of the resident Green Darners hunker down and overwinter under the ice.

Please note: The most common butterfly on the BugLady’s landscape these days, the Red Admiral, is also a migrant to these parts. Red Admiral, Painted Lady, and American Lady butterflies, all in the wandering genus Vanessa, are cold-intolerant. They return to our area in spring, and some years see huge population booms and mass migrations. You can report spring migration sightings on The Red Admiral and Painted Lady Research website (where you can also find out some neat stuff about RA behavior).

Go outside—it may be early; it may be eerie; but spring’s happening.