Today’s saga could also be called “The Hemiptera Mystery,” though one of the Hemipterans appears only in a supporting role. The main character is a decent-sized true bug (Hemipteran) named Acanthosephala terminalis. For an insect that has a wide range (much of eastern North America), is conspicuous, and is not a shrinking violet, it’s surprising that the AT doesn’t have a common name. 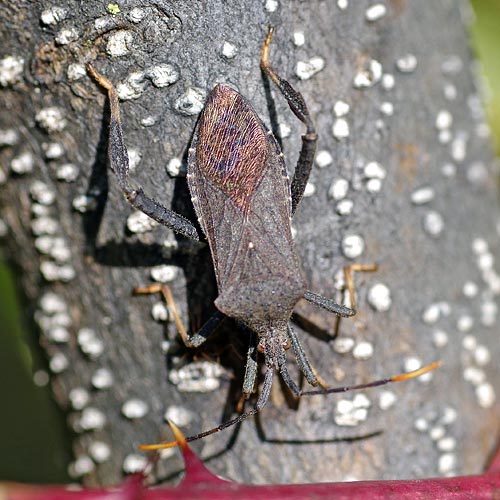 Quick review: members of the order Hemiptera are the only ones that can “legally” be called bugs, though they loan out the name to other groups. The order has been massively reconfigured – lumped. It now includes a bunch of bugs like leaf/plant/treehoppers, aphids, cicadas, scales, etc. that used to be in their own, separate order (Homoptera), plus the original Hemipteran insects (stink, leaf-footed, assassin, seed, and aquatic bugs, etc.), which are now tucked into a suborder called Heteroptera within the order Hemiptera. Hemipterans (the name means “half-wing”) have wings that are membranous (like a fly’s wing) at the tip but leathery at the base. They have piercing-sucking mouthparts, which some species apply to plants, and some apply to other animals.

“Acanthocephala terminalis.” “Thorny-head” (there’s a short spine that protrudes from the front of the head, easily seen here http://bugguide.net/node/view/1428294/bgimage) with the terminal segment of the antennae different from the rest (in this case, in its color) (its six “socks” match, too). There are four species of Acanthocephala in North America, and AT is the one that ventures north into God’s Country. It’s in the Leaf-footed bug family Coreidae, though not all Coreids have the little flange on the hind tibia that gives the group its name. 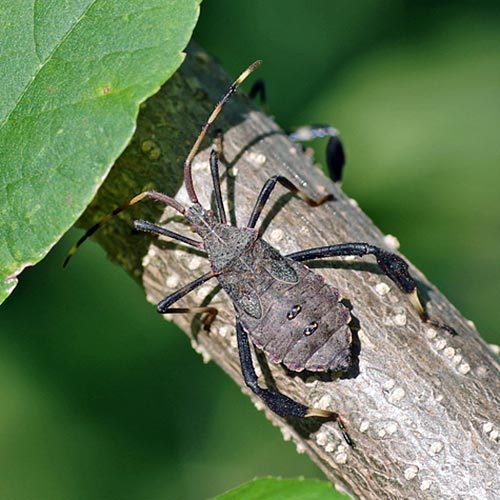 Although it feeds on woody plants, AT is found in a wide variety of habitats including woods, edges, and grasslands.

AT overwinters as an adult, and mates and lays eggs in spring. The infants are pale at first but change color as they get older (see buggguide.net for a great series of pictures of an older nymph molting – some other bugs are also pink/red immediately and temporarily after they molt). The upturned abdomen is a typical posture for the nymph.

Adults are generalist sap feeders, but AT nymphs’ sip sap from their main host plants – sumac, wild grape, and ninebark. The nymphs are found on a variety of trees, though it’s not known if they actually feed on them, and they seem to have a special affinity for collecting on ash trees. The BugLady sees AT nymphs as well as those of the related Helmeted Squash bug on leaves with bird droppings on them, and she always wonders if they get minerals from the whitewash.

If you try to take its picture, a Coreid nymph will often sneak around to the other side of a leaf or stem, and adults will fly readily and can fly well. In aid of their defense, they have the ability to produce and spray a nasty-smelling/tasting chemical.

(Googling Anthocephala terminalis results in a surprising number of hits from homeopathy sites, but the BugLady doesn’t know what that’s all about.)

OK – so where’s the mystery? And what about the other two bugs?

Recently, the BugLady came across a young ash tree that was wounded in some way – whether by being pierced by the beaks of ATs or nicked by something larger (or both), she cannot say. The trunk was being visited by a small, emerald-green solitary bee, as well as by ants and yellow jackets, all of which have a sweet tooth. 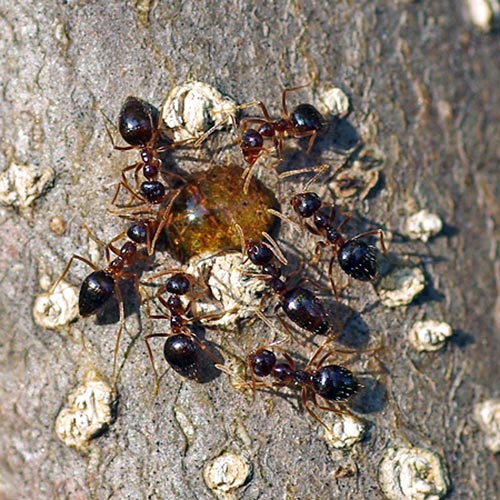 The books say that ATs seem to be somewhat gregarious and that they can be found in mixed-age groupings, and that’s what the BugLady saw on the ash tree. One source mentioned that males (presumably adults) will fight with other males, but as the BugLady watched, she saw several nymphs that just couldn’t walk past each other without throwing a few kicks.

The BugLady also saw an adult Helmeted Squash bug on an adjacent blackberry stem, being checked out by an AT nymph. 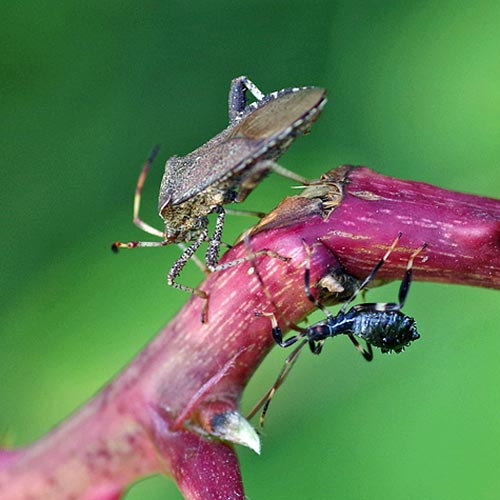 But all of this came later. What attracted her eye in the first place was two bugs on a leaf, one an AT nymph and the other a Rough stink bug (Brochymena) (coincidentally or not, they were standing over a bit of bird poop).

The books say that ATs are, as are other Coreids, drinkers only of plant sap, although a few references say that although there is some anecdotal testimony about predaceous leaf-footed bugs, they are probably misidentified assassin bugs. They do not have a carnivorous, nymphal, Rumspringa-like fling.

And yet. Here’s what the BugLady saw through her lens. The AT and the Brochymena, standing an angle to each other, never budged during five minutes of close-ups. Right from the start, the BugLady had the feeling that the AT was piercing the Brochymena, though the pictures aren’t clear enough to show a connection. In one of the pictures, it’s obvious that one of the Brochymena’s front feet is off the leaf. And, oh yeah – several times while she was focusing on the pair, she saw the Brochymena gave a little shiver.

“Each observation, however, has raised more questions than it answers, so the sum of my watching has caused me to grow in ignorance, not in knowledge.” Sue Hubbell, in Broadsides from the Other Orders.