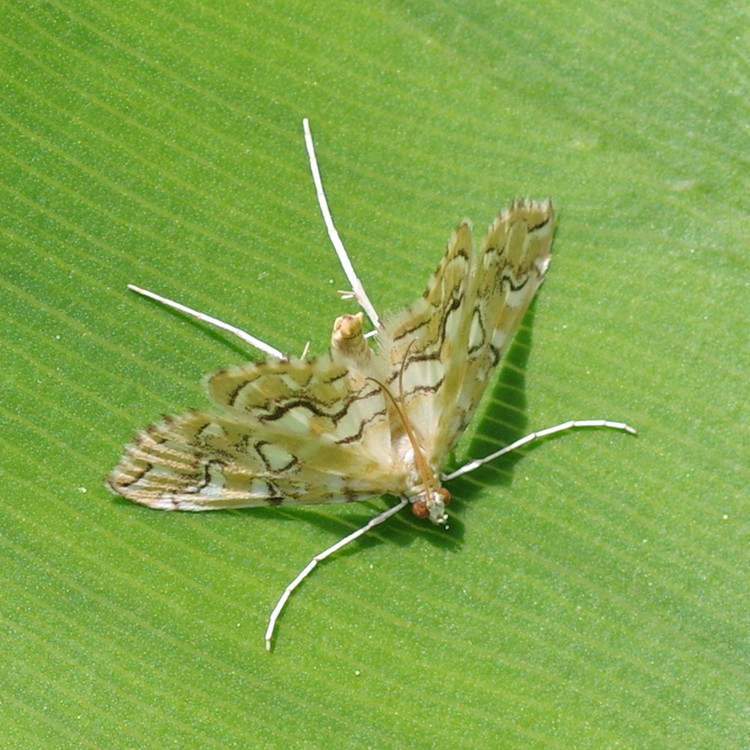 The BugLady has been neglecting moth lovers (again), and she offers these two delicate beauties in apology.

The handsome but, in the BugLady’s opinion, potentially-invasive Arrow Arum (Peltandra virginica) (aka Tuckahoe and bog arum) is an eastern species that is making inroads in Wisconsin (it’s found in at least four counties, and it can be purchased on-line for your water feature or restored wetland). Its robust, arrow-shaped leaves provide perches and shelter for lots of insects and spiders, and its foliage and pollen attract a few beetles and flies. Like other members of the arum family (Skunk cabbage and Jack-in-the-Pulpit), it contains calcium oxalate crystals that discourage grazing by mammals, but it’s eaten by a few species of turtles and its berries are food for some marsh birds.

The BugLady was enjoying a trip around the boardwalk at a local wetland when she found these moths sitting on arrow arum leaves. Both are members of the Crambid snout moth/Grass moth family Crambidae and are in the superfamily Pyraloidea, the Pyralid and Crambid Snout Moths. There are lots of pictures of Crambid moths with their abdomens arched up toward their heads, but the BugLady could find no explanation for it (in dragonflies it can be an aggressive posture or a thermoregulatory behavior). Crambid moths are a large group (860 species in North America) of small moths, some of which, especially in the genus Pyrausta, are pretty fancy: https://bugguide.net/node/view/614424/bgpage,

They are similarly varied in their habits and natural history.

Crambids are found around the world, in or on, says bugguide.net, “terrestrial or aquatic vegetation; one group lives only in nests of arboreal ants.” Bugguide goes on to say that “the larvae are stem borers, root feeders, leaf tiers, and leaf miners.” The larvae of some are harmful to agricultural crops, but the larvae of others are used to control problem plants.

The BugLady found a very cool article called “Moths are not silent, but whisper ultrasonic courtship songs.” Researchers Nakano, Takanashi, Skals and Ishikawa at the University of Tokyo wrote that “Ultrasonic hearing is widespread among moths, but very few moth species have been reported to produce ultrasounds for sexual communication. In those that do, the signals are intense and thus well matched for long distance communication. By contrast, males of the Asian corn borer moth (Crambidae) were recently shown to whisper extremely low-intensity ultrasonic courtship songs close to females.” The low sound levels, they say, help the moths stay below the radar of parasites, predators and rival males.

They go on to say that in “Males of nine species [including some Crambids], 70%, produced broadband ultrasound close to females….. These quiet and/or hyper-frequency ultrasounds are audible to nearby mates, but inaudible to unintended receivers. Although largely unknown because it is so inconspicuous, acoustic communication using low intensity ultrasound appears to be widespread among hearing moths. Thus, acoustic communication may be the norm rather than the exception.” They determined that sound is made by rubbing specialized scales on the wing against scales on the thorax, and they note that the sound suppresses the female’s “escape behavior.”

Without further ado: the Chestnut-marked pondweed moth and the Pond pyralid. 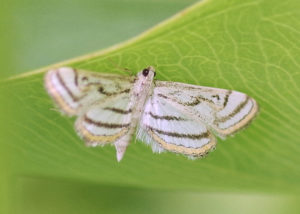 CHESTNUT-MARKED PONDWEED MOTHS (Parapoynx badiusalis) are found in the eastern quadrant of North America around the ponds, marshes and lakes where their larvae live on/in the ubiquitous Potamogeton pondweeds and water milfoil. They’re small, with a wingspan just under an inch , and the author of the “Distracted Naturalist” blog describes them as “Something we don’t notice eating something else we don’t notice.”

There’s not much on-line about the CMPM’s biography, because it minds its P’s and Q’s and doesn’t feed on stuff we are particularly fond of or annoyed by, but the BugLady found a paper about Paraponyx seminealis, a close relative that is a candidate to provide biological control of some overly-enthusiastic aquatic plants in Florida. Its eggs are laid under the floating leaves of the host plant; the larvae burrow into the leaves to feed, and sometimes they spin out some silk and dangle down below the leaf to eat submerged leaves. Older larvae chew off pieces of vegetation and form them into cases that they attach to leaves, and they eventually make their cocoon inside the case.

Larval CMPMs breathe through via branched gills. In a study of respiration systems in aquatic Lepidoptera a century ago, Paul Welch concluded that “The results of this part of the work seem to show that fundamentally these aquatic caterpillars have retained the original terrestrial form of body tracheation and that the gill tracheation is a system superimposed upon the one already present in the whole group.” 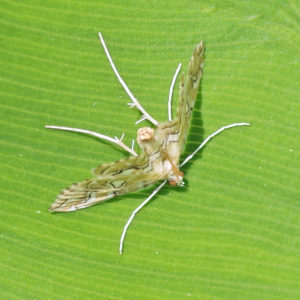 PONDWEED PYRALIDS (Elophila icciusalis) are found moving or still water in North America , east of the Great Plains. The aquatic larvae have a more catholic palate than the CMPM, being found on duckweed, eelgrass, bog bean, Potamogeton, bur reeds, and some sedges.

Once again, the BugLady couldn’t find much direct material about this species, but she found information about the waterlily leafcutter (Elophila obliteralis). Eggs are laid on the edges of submerged plants. Like the CMPM, the larvae cut out leaf pieces and make a case that they attach to an underwater leaf, and they make larger cases as they grow. They stick the front half of their body out of the case to feed on their host leaf, and they pupate within the case.

Pondweed Pyralid larvae have no gills; their tracheal systems are similar to those of terrestrial insects, and they take in oxygen through their skin.