Here are two pretty beetles to remind us of summertime.

Shiny Flower Beetles appeared in the first half of August, covering goldenrods and a few other members of the Aster/Composite family as though scattered from a cosmic pepper grinder. Tiny, shiny, round, black dots that were, just as suddenly, gone. 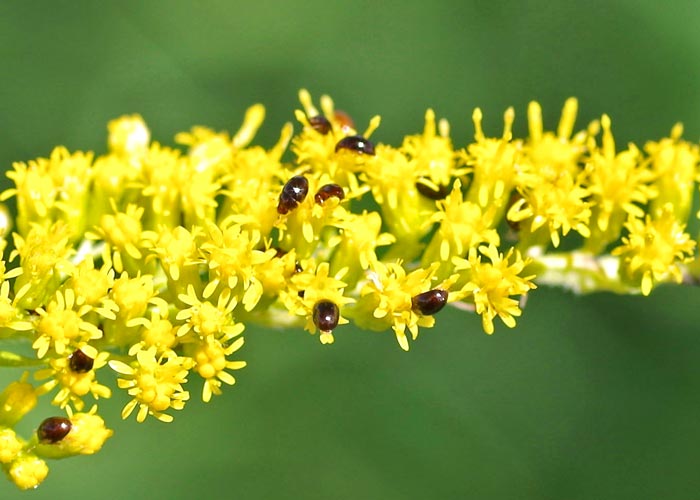 SFBs in the genus Olibrus are in the Shining flower beetle family Phalacridae (from the Greek for shining and circle), and, first off, they’re misnamed (more about that shortly). The SFBs are a small family, with about 125 species in North America and fewer than 650 species worldwide. Olibrus is the largest of the 50 or so genera in the family. Since they’re in the one to three millimeter size range, keying them to species requires scrutinizing their hind feet, antennae or, as Monty Python would say, their “naughty-bits” under good magnification. 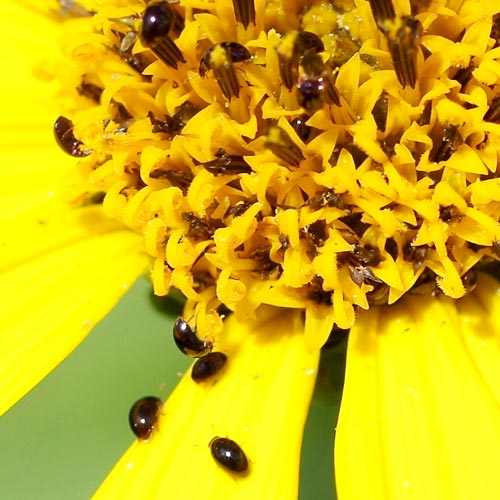 Most members of the extended SFB family dine on fungus spores or hyphae (the threadlike filaments that make up the fungus’ support system). As adults and as larvae, Olibrus SFBs are found on flowers. Olibrus adults feed on pollen (one author wondered how, with SFBs so numerous, the goldenrods had enough pollen left to reproduce), and the larvae, buried deep in the flowers, drink only sap (they chew through flower buds and seeds to get the plant juices flowing, but apparently they spit the solids out and start sipping). Because Olibrus SFBs are so conspicuous and easily collected, they have become the poster-beetles for the whole family, so while some sources refer to the family as Shining Mold beetles, most call this group of fungus-eaters the Shining Flower beetles. 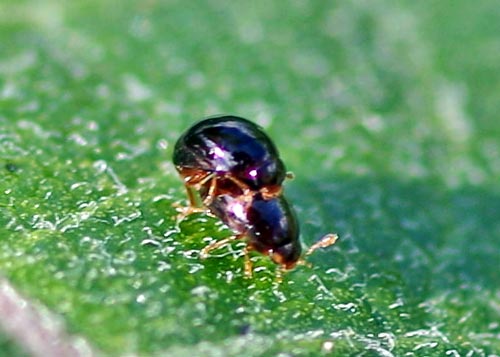 Olibrus SFBs produce a single generation a year, timed to coincide with the flowering of their favorite composite. In fall, the larva falls from the plant and tunnels into the soil, where it spends the winter as a pre-pupa; it will pupate the following spring or summer. The beetles’ domed shape allows them to practice the stop-and-drop response when alarmed.

When the BugLady encountered these lovely black beetles with red epaulettes and derrieres, they were helping to control the sumac population. With no common name in sight, the BugLady hereby dubs them the Black and Red Sumac Leaf Beetle (Cryptocephalus quadruplex, probably), though they are polyphagous (which means that they eat a bunch of different plants including sumac). According to reports from the late 1800’s and early 1900’s, their taste for raspberry and blackberry leaves, got them blacklisted as pests. 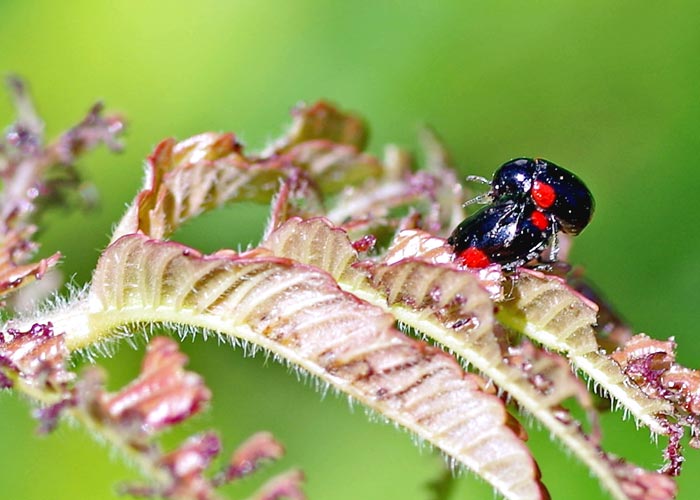 Their genus name, Cryptocehpalus (hidden head) refers to the fact that the beetle’s head is recessed or tucked/tipped down into its thorax (quadruplex sounds like a movie theater with four screens, but according to bugguide.net, it is from the Latin for interwoven or network. The BugLady doesn’t get it, either.). BaRSBs are one of about 80 species in the “case-bearing” leaf beetle bunch, beetles whose larvae travel about in cases made from their own fecal material. Females oviposit in the leaf litter, the larvae eat dead leaves and grow there, and the almost-grown larvae spend the winter deep under the insulating leaves and are ready to emerge as adults by the end of May. At 4 mm in length, they are giants next to Olibrus SFBs. 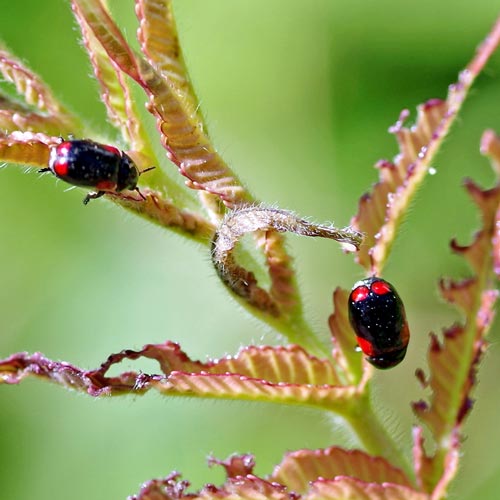 Other than their presence on the lists of many state museums and nature areas, these are small, pretty, “unsung” leaf beetles in the huge family Chrysomelidae. BaRSLBs live within a giant area running from Maine to Georgia to New Mexico to Montana, spilling over into Canada.