Many moths live their lives anonymously, but there are stand-outs. These two are “porch moths,” attracted to the front porch light.

The BugLady isn’t totally sure of the identity of this spread-winged, yellow-with-purplish-markings moth, but she can make a good guess (she can just hear BugFans saying “Oh yeah, I’ve seen those!”). It’s probably the False Crocus Geometer, a.k.a. Buttercup Moth (Xanthotype urticaria); the next best guess would be the nearly-identical Crocus Moth (X. sospeta). The brownish-purplish markings on both are variable, even within the species, but some moth people say that X. sospetra‘s wings are paler and X. urticaria‘s wings are spottier. The nether end of the males must be intimately examined for a positive ID; photo IDs are “iffy.” Wingspread is about two inches; females of both species are larger than males, and their wings are plainer. The xantho in Xanthotype means yellow and urticaria comes from the Latin word for nettle and is a medical name for hives, but the BugLady couldn’t find out how it applies here. 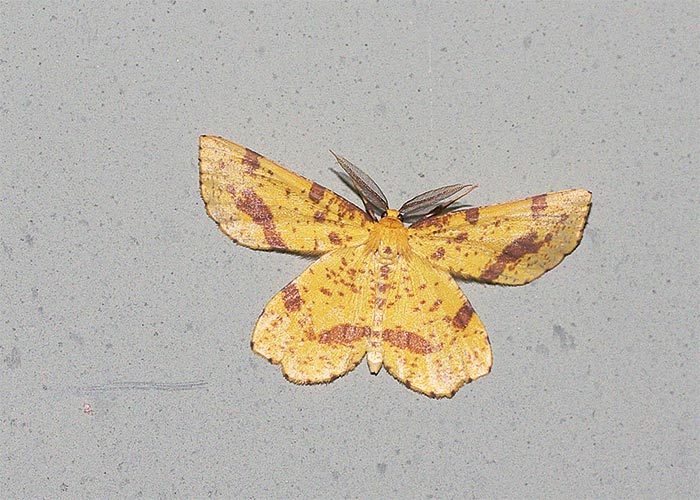 Geometrids (in the huge family Geometridae) are also called Geometer moths or Inchworm moths. There are 1,400 species north of the Rio Grande (35,000 species worldwide). Geometers typically perch with their proportionately-large, flimsy-looking wings held flat. Like several other moth families, Geometers have tympana (hearing organs) on the base of the abdomen. As a group, these are hardy moths that are seen well into late fall and, in fact, some fly even when temperatures approach freezing. In some species, females are wingless; in others, adults do not feed.

Their green or brown offspring are the famous twig-like inchworms (who can forget Danny Kaye, as Hans Christian Andersen, singing “Inchworm, inchworm, measuring the marigolds…”?) (OK, most of you.). They’re also called measuring-worms or span-worms. The caterpillars’ distinct gait is due to reduced or absent middle legs. In order to move, they must hitch their back legs toward their front end, and then extend the front out from the rear. When startled, they stretch and freeze, and become small twigs. Geometer caterpillars often hang down from trees, suspended on silk.

Various Xanthotype species are found in forests and openings throughout North America, from Canada through Panama. They come to lights at night, but FCGs are also seen by day. Despite their names, the caterpillars, described as “generalist feeders” did not have crocuses, buttercups, or nettles on their food lists. They like a mixed bag of woody and non-woody plants including catnip, ground ivy, goldenrod, rose, gooseberry, dogwood, and a few trees.

Sources exclaim about odd posture of the striking, purplish-with-yellow-markings Gold Fringe/Gold Triangle/Clover Hay Moth (Hypsopygia costatis) but no one really explains it. At the very least, a predator might have trouble figuring out what it was looking at; at worst, a predator might get a bite out of the wings but miss the major organs. Gold fringe moths may also rest in a “typical” moth triangle. 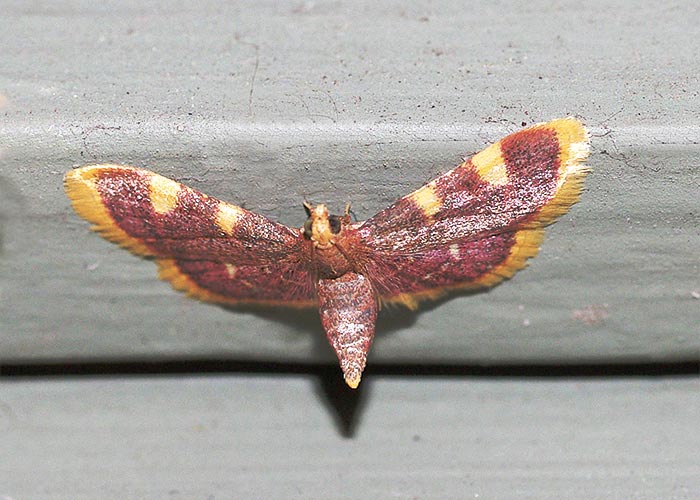 GFMs (thanks for the ID, Les) are in the Family Pyralidae, about which Eaton and Kaufman say, in their wonderful Field Guide to Insects of North America, “Pyralid moths include many small species with varied lifestyles, but the ones that draw the most attention are those few that have an impact on human food supplies.” (One species of Pyralid eats wax in bee hives.). There are about 6,000 species of Pyralids worldwide, and one-tenth of them are native to North America. They are smallish to medium-sized moths with wingspreads of 3/8 to 2 1/8 inch. At rest, they might hold their wings flat or roll them up. Like the Geometrids, they are able to hear, using a pair of organs located on their abdomens. And if they can hear, they should be able to vocalize, unless their hearing exists to help these nocturnal moths detect bat radar.

The GFM seems to be one of those species that intersect negatively with people and their food supplies. According to Holland, in The Moth Book (1903) the GFM “has a habit of infesting stacks of clover-hay, and it often does a great deal of damage by weaving its webs of fine, whitish silk mixed with excrement in the hay and devouring the leaves…This troublesome little species is no doubt an importation from Europe, where it is very common. It has spread from the Atlantic to the Rocky Mountains.” GFM caterpillars eat dried plant material, stored grains and spices, and dried flower arrangements, and the caterpillars sometimes occupy chicken nests.

Look for GFMs in agricultural fields, flower gardens and woodland edges from Minnesota to Arkansas to the Carolinas to Maine (with a few outlier reports from the Great Plains).

Moths are sometimes conspicuous by their absence. For the past few years, the air above the field near the BugLady’s yard light has been pretty empty of nocturnal moths. This spring and summer, for whatever reason, there is a multitude of small moths above the grass-tops to feed the bats, birds, spiders, robber flies and other predators that work the fields.