Just when the BugLady thought that her Front-Porch-Bugs had called it quits (except for the crickets and katydids), she went out one night with the dog and found these two newcomers, disparate beauties, sitting inches from each other under the porch light.

Owlet Moths are in the family Noctuidae, a huge and varied group. It’s the largest moth family, with 3,000+ species in North America and 35,000+ worldwide. Tiny? Huge (5+ inch wingspreads)? Day-flying? Night flying? Flashy? Exquisitely camouflaged? Lumpy? Not? Yes. Noctuid classification is being scrutinized using a DNA “bar-coding” technique which may, over the next decade, help sort out who is related to whom. In the meanwhile, the family includes darts, daggers, sallows, foresters, loopers, underwings, Zales (and the Owl-eyed Bird-Dropping Moth, the Variegated Brindle, the Festive Midget, the Indomitable Melipotis, and the Black Witch, the moth that is on the BugLady’s “Most Wanted” list.) (naming stuff must be so much fun!). 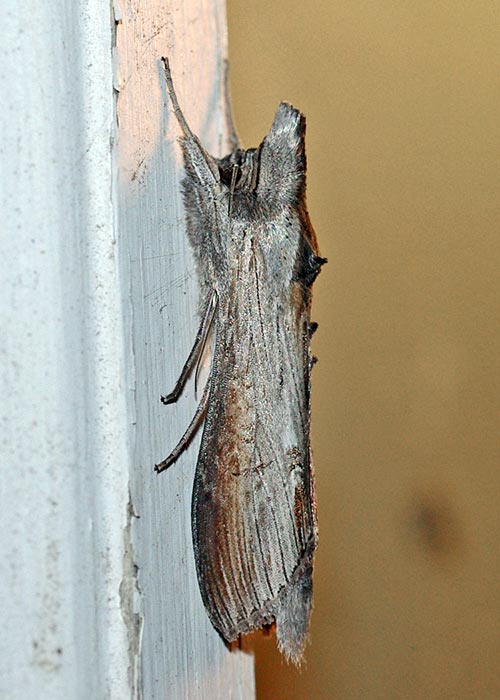 According to The Audubon Society Field Guide to North American Insects and Spiders, Owlet moths fold their wings in a “rooflike” fashion over their body when at rest, have slender antennae, a well-developed proboscis, and a hearing organ (tympanum) on each side of the thorax. In general, when Mother Nature equips an organism with ears, it also comes with noise-making capabilities; but for nocturnal moths, being able to pick up the sounds of bats on the hunt is also important. Arctiid (tiger) moths hear bats and then squeak back to advertise their distasteful presence. As a group, the food preferences of Noctuiid caterpillars are broad. The caterpillars, which include the cutworms and armyworms that retreat into the soil by day and feed on crops at night, frequently make the lists of top agricultural pests. Adults feed on nectar from flowers or on fermented tree sap or fruit.

This particular owlet seems to be the Goldenrod Hooded Owlet, also called the Asteroid (Cucullia asteroides), which inhabits North America east of the Rockies. The genus Cucullia contains the hooded owlets, so named for the tuft of hairs on the thorax. The twig imitation of this 1 ½” long moth didn’t quite work on the BugLady’s front door frame. Some moth books picture moths in a spread-winged, pinned position – very unhelpful in this case – but the excellent Moths of the North Woods shows moths as they sit. As you would expect, its caterpillars feed on goldenrods, with some asters thrown in for variety. According to www.illinoiswildflowers.info, adults have been recorded on the fall-flowering Witch Hazel shrub.

The Asteroid moth gets its name from the fact that its caterpillars feed on plants in the Aster family, Asteraceae. In a happy bit of symmetry, the BugLady (who loves multi-disciplinarians) came across a reference to a celestial asteroid that was discovered in 1997 and named Cucullia.

The second critter in this Mutt and Jeff pair is the 3/8” long planthopper called Wolf’s Otiocerus (Otiocerus wolfii) (apparently, moth-namers have more fun than bug-namers). Within the very diverse planthopper bunch, this bug belongs to an uncommon, little-studied, mainly tropical family called the Derbid Planthoppers (Derbidae), in which Otiocerus is a New World genus. According to Eaton and Kaufman in the excellent Field Guide to Insects of North America, the derbid planthoppers “resemble small moths or caddisflies but have a pronounced, broad snout.” 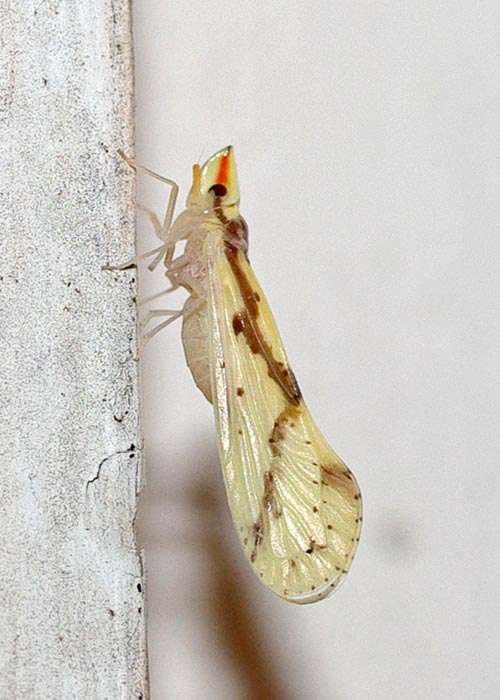 Their rarely-observed nymphs feed on woody fungi, and there is an excited exchange in bugguide.net between an entomologist and an insect enthusiast who submitted his “what the heck are these??” photos of a nymph for identification. Adults are phloem feeders (phloem, as BugFans will recall from high school biology, is the living plant tissue that transports nutrients around in a tree). The BugLady assumes that Derbids feed on the contents of the phloem tubes, not the phloem tubes themselves. The BugLady couldn’t find a whole lot of information about the WO, but according to the “Report of the State Entomologist on injurious and other insects of the state of New York” (1893), adult WOs are found on walnut trees, and a Ph.D. dissertation written in 1922 (The Fulgoridae or plant-hoppers of Mississippi, including those of possible occurance: a taxonomic, biological, ecological and economic study) puts them in sycamores, too.

The BugLady has been clinging to the old classification of bugs long after the rest of the BugWorld jumped aboard the new. It used to be that the True Bugs (stink bugs, squash bugs, water striders, assassin bugs, etc,) were in the Order Hemiptera, and the aphids, cicadas, leaf/tree hoppers, scales, spit bugs, etc. were in their own order, Homoptera. The “lumpers” struck (for legitimate reasons, the BugLady is sure), and now there is a single order, Hemiptera, which contains the three suborders—Heteroptera (the bugs formerly known as “hemiptera”), Sternorrhyncha (aphids, scales, and a few others characterized as “plant parasites”), and the Auchenorrhyncha (tree/leaf/plant hoppers, scolops, cicadas, etc). The BugLady has been resisting adopting the change because the she can’t spell Auchenorrhyncha and she couldn’t pronounce it on a bet.