Butterflies and moths are together in the order Lepidoptera (“scaled wings”). Although there are some very colorful moths, many moths look well-nigh identical (smallish and brownish). Butterflies are generally more flashy, and some even have their own fan clubs and web-presences, so we forget that moths seriously outnumber butterflies. There are 12,000+ moth species in North America compared to 700+ butterfly species; worldwide, between 5% and 10% of the Lepidoptera that have been described (that number ranges from 120,000 to 175,000) are butterflies.

In general, moth bodies are thicker and “hairier” than butterflies’. Where butterfly antennae are tipped with knobs, moth antennae are feathery (though the feathers may look compressed when the moth is in action). Many (but not all) butterflies fold their wings flat against each other at rest (like clapping your hands). The vast majority of moths are nocturnal, and although some species of butterflies have been reported after dark, most are sun-lovers. Moths make a cocoon of silk, sometimes incorporating leaves or body hairs, and some pupate underground; butterflies make a thin-skinned, translucent chrysalis.

According to Jim Sogaard, in Moths and Caterpillars of the North Woods, butterflies were a later branch on the Lepidopteron tree, probably developing during Jurassic times (190 million years ago) from a group of moths that adapted to day-flying in order to a) avoid nocturnal predators; and/or b) take advantage of day-flowering plants.

The two moths that are featured today, the Walnut Sphinx and the Spotted Thyris, are pretty different from each other—one large, one small; a day flyer and a night-flyer; one from a very large family and one practically an only child; one well-“biographied” and the other barely known.

The BugLady encountered this Walnut Sphinx (Amorpha juglandis) on her way to an evening program recently. It was perched outside, under a porch light, and she missed the opening remarks as she was making its acquaintance. One of the hallmarks of this lovely and highly variable moth is the way is holds its wings; entomologists guess that it is imitating a dead leaf (although it has never seen one…). 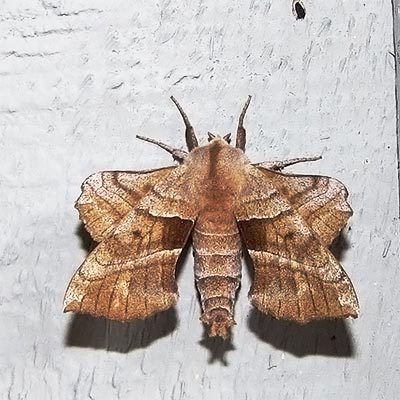 WSs are in the Sphinx moth family Sphingidae, in a group called tree hornworms (like the related Tomato Hornworms, their posteriors are decorated by a curved spine). Many of them are named after the type of leaves they eat. The WS’s tastes are a bit more catholic than some of its brethren—it chows down on walnut, butternut, hickory, alder, beech, hazelnut, and hop-hornbeam (and, back in the day, American chestnut). It is found in deciduous woodlands in the eastern half of North America. Adults, which have a wingspread of about 2 ½”, do not eat.

In his Caterpillars of Eastern North America, Wagner says that if you want to find a WS caterpillar you should go outside, stand under your walnut/hickory trees (from July to October), and shine a flashlight upward onto the lower sides of the leaves. Yet another endorsement for not having neighbors close by. The caterpillars are so well-camouflaged that they apparently are easier to find at night. The BugLady has made one search, with no success other than a really spiffy long-horned beetle that may star in its own BOTW. If she does come across a caterpillar, she will post the picture. In the meantime, check out this bug guide link for pictures of the different shades of adults and of the green and granular caterpillars.

If there is one hit on the internet about the WS caterpillar’s ability to whistle, there must be hundreds. Media from scientific journals to the Huffington Post to MSNBC to YouTube have covered the story. It seems that if you do find a WS caterpillar, you should poke or otherwise “bug” it. It will respond by thrashing about and by producing one or a series of high frequency-to-ultrasound whistles, lasting for as long as four seconds. Sound production is a very rare talent in a caterpillar—a few others click their mandibles. The caterpillar contracts its front segments in order to force air out of spiracles on the eighth segment at the rear of its abdomen (it has other spiracles, too and they are used as breathing pores). In real life, this behavior scares the dickens out of avian predators. The BugLady has thrown out the word aposematic in reference to insects with conspicuous coloration that advertises their distastefulness/toxicity. One reference calls the WS whistles “acoustic aposematism.” Whether the WS caterpillar tastes bad or not, it is startling.

The Spotted Thyris moth (Thyris maculata) is a day-flying moth tiny enough (wingspread of just over ½”) to fit easily on the disc flowers of daisy fleabane. It’s in the mostly tropical/sub-tropical Window-winged moth family Thyrididae (so called because of a few white/translucent spots on its wings—thyris means “small door” in Greek). Thyris is a small genus, with only a few other species (but including the distinctly non-cheery-sounding T. lugubris and T. sepulchralis). ST moths are found in sunny areas east of the Mississippi. They’re easily overlooked, being slightly smaller than a honeybee, and so are probably more common than we realize. 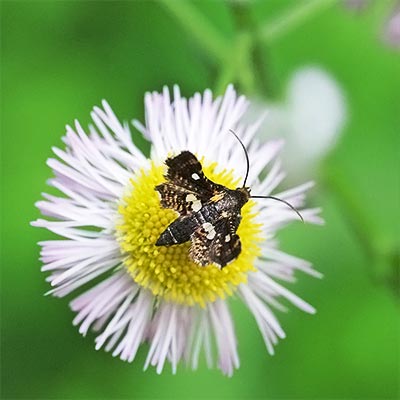 The moths nectar on a variety of flowers, while their caterpillars either bore into stems or feed inside the rolled leaves of bluets and members of the clematis family.

A Butterfly Note: A year ago, the BugLady posted an episode about wood nymph butterflies, and lamented that for the first time, she had no Northern Pearly-eyes in her back yard. This year, they’re back, hanging out at her bird feeder, enjoying the grape jelly and the oranges set out for the orioles and woodpeckers. They feed well into the dusk—this photo was taken at sunset, and there were still butterflies there 15 minutes later. How many Pearly-eyes can dance on the head of an orange? 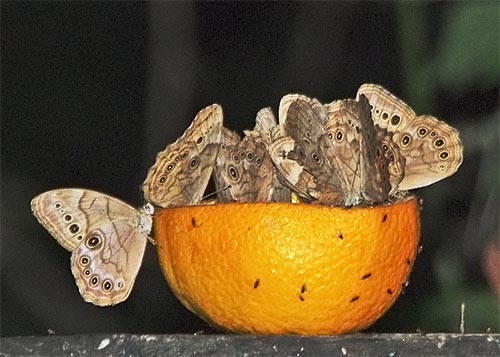