Seasoned BugFans may have noticed the BugLady’s fascination with critters that are out at the far limit of the human eye’s (and the camera’s) ability to perceive. Today’s two beetles, in the half-to-three-quarter-inch range, are giants by comparison.

There are about 2,500 species of blister beetle in the world, and about 410 of them are found in North America. Like many insects that have complete metamorphosis (egg to larva to pupa to adult), BBs occupy different habitats and enjoy different diets as larvae than they will as adults.

Blister beetles, family Meloidae, are famous for their choice of weapons. They protect themselves from predators by causing a caustic chemical called cantharidin to seep from their joints when alarmed (reflex bleeding). Cantharidin raises blisters on human skin; is toxic to small animals that attempt to prey on BBs (though some birds can tolerate them); can cause problems for livestock when beetles are baled along with fodder; and has been used medicinally, often with disastrous results.

Today’s beetles are the Margined Blister Beetle and Zonitis bilineata. The ubiquitous Black Blister Beetle (Epicauta pensylvanica), which graces goldenrods in August, was featured in a BOTW about a year ago. 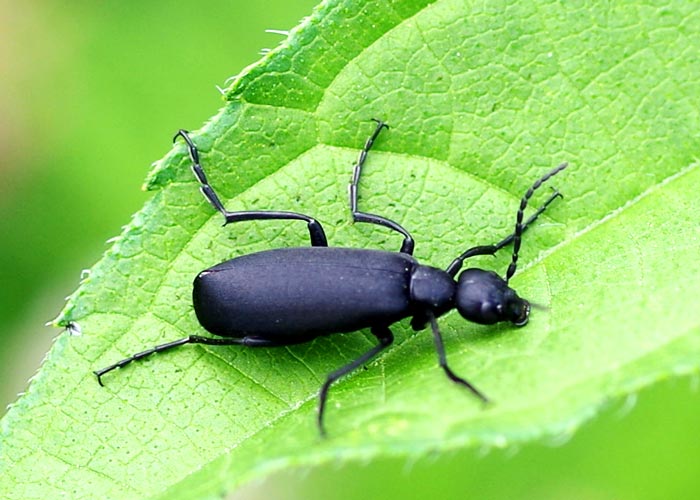 The BugLady thinks that the solid gray beetle and the gray beetle with-black elytra (wing covers) are the Margined Blister Beetle (Epicauta funebris, formerly E. pestifera ), unless it’s the very similar Clematis BB, (Epicauta cinerea). They can be impossible to ID from pictures, and both come in the same black, gray, and margined color phases—so tibial spurs, antennal characteristics, and mouthparts need to be scrutinized. There are BB species that are simply gray, but because the gray beetle was a foot away from the margined beetle on the same plant, the BugLady is going to make the leap and assume they are the same species (circumstantial, but not necessarily definitive). Funebris means “funereal.”

The Margined/Ebony/Soybean Blister Beetle is found throughout North America east of the Great Plains. As its name suggests, the MBB is one of several members of the genus that eats soybeans, and they can be a minor crop pest. They also feed on plants in the aster and potato families and on other members of the pea family, including alfalfa, which results in those problematic hay bales that contain squashed and oozing BBs. Leaving cut alfalfa on the ground for a while before baling it allows the beetles to vacate the premises.

Newly-hatched BB larvae are called triungulins—highly mobile overachievers that hit the ground running, latch onto prey (or onto a free ride to prey—see Zonitis, below), and revert to a more typical worm-like larva once their meal ticket is assured. In the case of the MBB, the female lays her eggs on/in the ground. The predaceous MBB triungulins locate the egg pods of two Melanoplus species, the Two-lined and Differential grasshoppers, climb inside, consume the eggs, and eventually pupate there. The more grasshoppers there are on the landscape, the more BBs there will be.

The BugLady spied this Zonitis bilineata (probably) tucked in between the leaf stalk and stem of a sunflower. It has no official common name, but its species name is Latin for “two-lined,” and that’s good enough for the BugLady. The “Two-Lined” Zonitis” can be found over much of North America except for the far Northwest and far Southeast. It appears early in the literature, being listed as present in surveys from the Agricultural College of New Mexico (1890), the Entomological Section of the Academy of Natural Sciences of Philadelphia (1817), and the Zoology section of the Report Upon United States Geographical Surveys West of the One Hundredth Meridian (1875). Adults are seen in grasslands, mainly on flowers in the Aster/Composite family, where they feed on the flowers and leaves. They are found in Wisconsin in mid-summer. 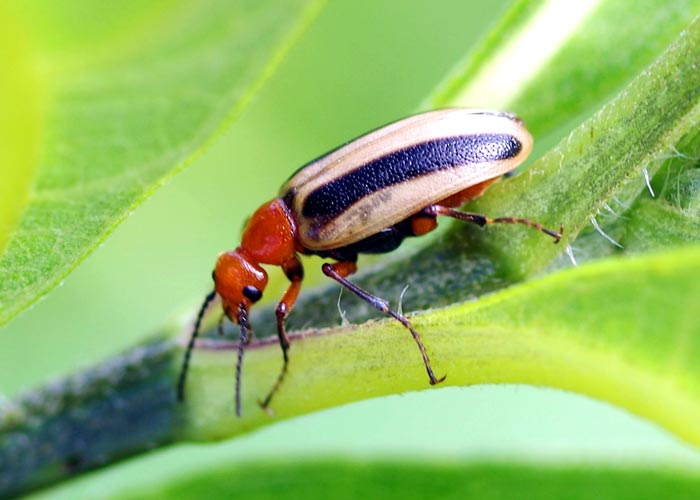 From what the BugLady has since read, her intrusiveness may have interrupted a little egg-laying. According to a 1956 University of Kansas Science Bulletin, the TLZ “deposits its eggs at the junctures of veins on the lower surfaces of sunflower leaves” and is “usually associated with Helianthus annuus ” (the common wild sunflower). After hatching, the larvae of the TLZ congregate for a few days before climbing onto the top of a flower. They don’t stay put on their host plant for long; when a feeding/foraging digger, sweat, or leafcutter bee lands on their sunflower, the larva latches onto the bee with its mandibles.

These bees prepare egg chambers in tunnels in the ground, and they provision them with pollen and honey for their future young. The TLZ larva taxis home with an unsuspecting female bee (phoresy), enters a cell and gets sealed into it. The larva eats the bee egg first, and then the food cache, and after a time, it pupates within the cell. 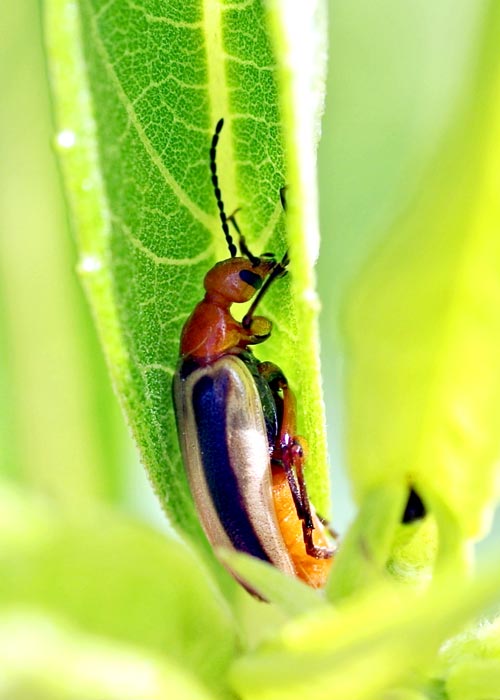 This is considered to be a more advanced reproductive strategy than that of the BBs that lay eggs in the ground. The authors of the Kansas Bulletin speculate that BBs discovered the ground nests of bees somewhat later on their developmental timeline, probably accidentally, and appreciated the food cache. Adaptations like phoresy followed.

Blister beetles tend to overwinter as an in-between stage called a pseudopupa. Instead of constructing a cocoon/pupal case, the insect pupates inside its final larval exoskeleton, which hardens/seasons and is called a puparium. BBs tend to match the length of their larval and pupal life to that of their hosts, but researchers in Kansas discovered that a larva could last an astonishing four to five years as a pseudopupa and still metamorphose successfully.

Four Bluets and a Dancer - and a Forktail (Family Coenagrionidae)