The BugLady gets a kick out of these thorn-mimicking Two-marked treehoppers (Enchenopa binotata) (“two spots”); there’s something both dignified and comical about the cut of their jib. Treehoppers are in the family Membracidae; the Greek word membrax meaning a kind of cicada. Taxonomically, they are not far removed from cicadas; behaviorally—in the “how-in-the-world-did-the-early-namers-know-that?” category, treehoppers communicate with their prospective mates vocally, making what is described as a “cicada-like whine” that is inaudible to our naked ear. Tree hopper? The odd source does mention that they hop (the closely-related leafhoppers sure do), and adults can fly.

There are about 3,200 species of Membracids, a.k.a Thorn bugs, in the world, and more are being discovered every day in the secluded canopies of rainforest trees. They’re a tropical-temperate bunch, with zero species on Antarctica, only three more than that in Europe (one of which is the accidentally-imported American buffalo treehopper), and 266 species in North America. They’ve have been around for at least 40 million years. 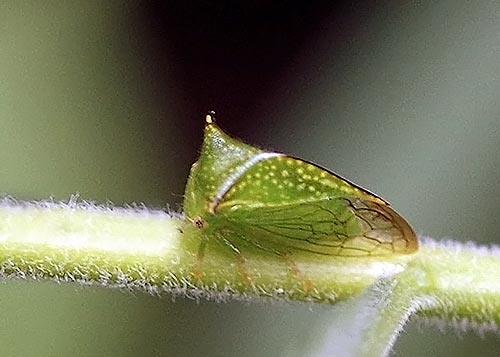 Their first two pairs of legs are flattened, and their eyes are lovely, and you generally can’t tell males from females at a casual glance. A two-marked leafhopper is about one-fourth of an inch long.

Both nymphal and adult Membracids tap into the stems of woody and herbaceous plants with their beaks and feed on the sap, and treehopper species are often closely associated with a single food source. Some species gather in groups as adults or nymphs. Some have mutualistic relationships with ants (mutualistic means that everybody’s happy), which protect them in exchange for sweet honeydew (the two-marked treehopper seems not to be tended by ants). Maternal care of eggs and even nymphs is seen in some species. Most American species fly under the Exterminator’s radar, except for a few species that do minor damage to trees during egg-laying, when the female saws into a stem or bud in order to deposit an egg, and a few more dine on agricultural crops. Tropical treehoppers can impact cacao and coffee crops, among others, and may be vectors of plant diseases. One species is so spiny that going barefoot in its vicinity is not recommended.

The 2-marked treehopper, famously (among taxonomists, anyway), is a species complex (more about that in a sec). 2-MTs hew to the basic family plan, feeding on sap of specific plants. They slit the bark of their host plant to deposit eggs within, covering the eggs with a secretion called “egg froth” that provides protection from desiccation in winter, may shield the eggs from predators, and that contains an attractant pheromone that brings other ovipositing females to the spot (where, like cows, they may line up, all facing the same direction). The eggs hatch in spring when they are re-hydrated by the rising sap of the host plant as its buds open and its shoots start to grow. The nymphal stages are awesome. There is one generation in Wisconsin.

And here’s where things get interesting.

The 2-MTs are a well-studied species complex, kind of a continuum of eleven (or more) very closely related species that look alike and yet don’t interbreed. Some species complexes occur geographically, with species replacing each other from east to west or north to south. In the case of 2-MTs, several species can exist in the same geographical area, never meeting up with each other because they have different host plants. They all have the same scientific name, followed by their host name. This is Enchenopa binotata Viburnum (it likes Nannyberry). If a male is forced to court from a non-host plant, he will sing his typical song, but he will signal less and the signals will be shorter. If a female is forced to oviposit on a non-host plant (a host shift), she will lay fewer eggs, and both the hatching success and the nymph survival will be lower, but they will respond to the phenology of the new host (and a new species may be in the works). 2-MTs are evolving before our eyes, and with DNA analysis, our ability to separate them correctly is also evolving.

Adults can fly, and they do end up on non-host plants, staring at similar-but-different 2-MTs. One study by Cocroft, Rodriguez and Hunt demonstrated that although more than 40% of courtships were initiated between different species of 2-MT, only 6% of the matings were between heterospecifics (members of another species). Why? Behavioral isolation (signals that don’t match) trumps (and reinforces) ecological isolation (host plant/host plant phenology).

How does that work? Boy and girl 2-MTs get together via a duet that he initiates. According to Cocroft, et al., a male advertises his species via his song, producing a whining sound followed by pulsing that is transmitted through the substrate—through the stems and petioles of the plant he sits on. He may sing sitting still or moving around or he may join a male chorus. If she likes what she hears, a female will insert her own voice, allowing him to find her. There is some individual variation in the sounds produced by males of her species, but the female trains males to stay with a range that she recognizes; different species on different host plants don’t interest her. It gets even better—almost a quarter of the variability of his signal results from slight differences within the genotype of his host plant species.

About the blunt-horned treehopper (X). The BugLady found several in close proximity to the adults on viburnum. When she tried to match the image to one at the bugguide.net site, she found the following note from an expert: “I also took a specimen like this – but in Nova Scotia. There is a slight possibility that this is an undescribed species, but a greater probability that it represents an abnormal reduction of the ‘horn.’ Please try to find the host, and watch for others.” Exciting times!

Odd treehopper factoid—various treehoppers form mutualistic relationships with a variety of other animals, including ants, to whom they signal, via vibrations. In Madagascar, some species of treehopper exchange signals with/enjoy a relationship with a few species of geckos, which are also allowed to harvest honeydew.