Long-horned beetles (family Cerambycidae) are a bunch of often-brightly-colored beetles of all sizes that may sport astonishingly-long antennae (horns) (check out this spiffy wasp-mimic). There are more than 10,000 (maybe more than 20,000) species of long-horned beetles worldwide, and about 1,000 of those occur in North America. The larvae of some species get into mischief by boring in trees, whether living or lumber. Here are two large-sized Cerambycids.

Giant Root Borers don’t bore into giant roots, but they do measure a hefty one-to-two inches as adults. The root boring part is done by the larvae, which feed on dead wood that has been invaded by fungi—just about any tree species will do. Fungi are ingested along with the wood; and these fungi provide enzymes which enable the larvae to digest the cellulose fibers in the wood (a situation that researchers now suspect might be fairly common in wood-eating beetles). Adult are nocturnal and their feeding habits are not well known, but they may feed on sap or fermenting fruits. 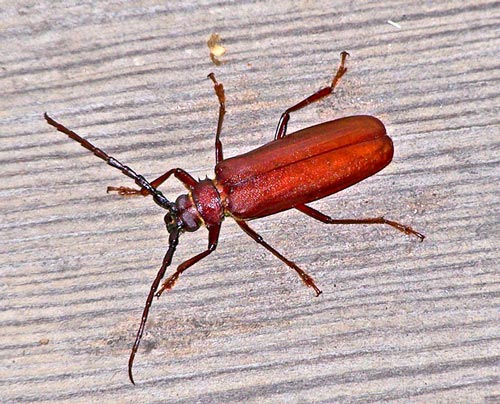 Larvae tunnel deep into rotting stumps and logs (and poles and building materials) and they like the area where wood and damp soil meet. As they move through the wood, they leave behind tunnels packed with frass (bug poop). No retreat. The subterranean air isn’t too wholesome, but a number of studies show that GRB larvae don’t care. In laboratory conditions, larvae that were in feeding mode moved toward areas with higher concentrations (10% and more) of CO2. They’re less interested in hanging out in the carbon dioxide when they’re not feeding. Scientists discovered CO2 sensors located on the GRB larvae’s mouthparts. 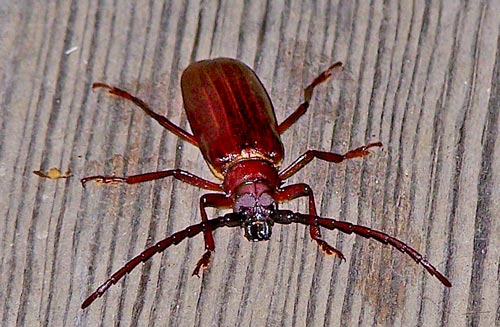 The GRB (Orthosoma brunneum) is in the subfamily Prioninae—one of eight subfamilies of the Cerambycidae in our area—a subfamily that includes some really big beetles worldwide. Prioninae are called the Tooth-necked Longhorns; GRBs have three spines sticking out from each side of their thorax. There are about 40 species of Prionids north of Mexico and many more south of the border, but the GRB is a loner—the only species in its genus (a monotypic genus). GRBs occur in woodlands in the eastern U.S.

Special Effects: Many adult Long-horned beetles, including the GRB, make squeaking sounds by rubbing their “chin against their chest”—scraping tiny ridges on the lower surface of the head against the inside of the thorax. This is a form of stridulation (making sound by friction).

The spectacular Elderberry Borer (Desmocerus palliatus), a.k.a the Elderberry Longhorn, Elder Borer, and Cloaked Knotty-horn Beetle practically sparkles. Elderberry borers are Flower Longhorns in the Subfamily Lepturinae. Many Flower Longhorns are much more dramatically wedge-shaped than the small-headed, broad-shouldered EB. They live where elderberries live, in the eastern U.S.

Palliatus apparently comes from the Latin palliate, which means cloaked. The inch-long EB has a spectacular yellow-orange patch (cloak) on its elytra, and each segment of its antennae has an enlarged tip (knot). Books and sites that describe EBs invariably say “unmistakable;” “nothing else in the area looks like them.” Except for some net-winged beetles and the Black-and-Yellow Lichen Moth (Lycomorpha pholus), which seem to be EB mimics.

Why mimic the EB? Once again, bright colors signal toxicity. The author of a Blog called “Beetles in the Bush” comments that “The cobalt blue and bright orange coloration of the adults screams aposematic (warning) coloration,” and continues “ Even their movements are those of a chemically protected model—lumbering and clumsy, without the alert evasiveness usually seen with other flower longhorn species”. 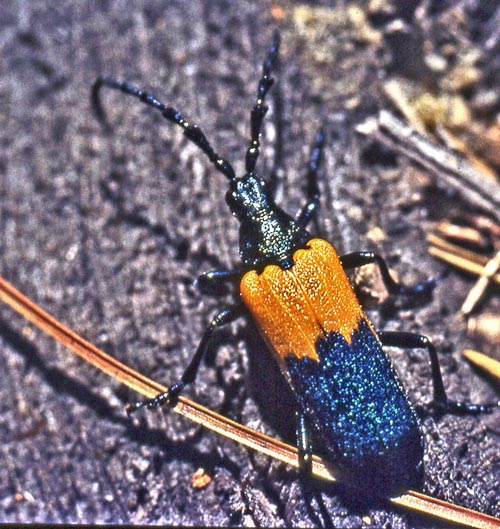 The EB is an elderberry specialist—its eggs are laid on the outside of the plant, near the ground, and when they hatch, the larvae burrow into the stem and down to the roots to feed. It takes a larva at least two years to mature, during which time its burrowing and feeding may weaken the plant or kill it. When it’s time to pupate, the inch-long larva (grub) tunnels up into the stalk. Newly emerged adults repair to the blossoms above to dine on elderberry pollen at the beginning of summer.

Elder shrubs (genus Sambucus) attempt to discourage grazers by making a sneaky glycoside that produces cyanide within its consumers as they metabolize it. Elder flowers are fine—they’re made into a syrup in Europe (and the syrup is used to make elder marshmallows in France!), and the flowers are battered and fried in Italy. Ripe berries are OK for human consumption, too, and are one of a wide array of plant parts that have been fermented successfully in service of man’s relentless drive to create alcoholic beverages. Leaf teas, toys, and whistles made from the stems are not recommended.

Wikipedia gives us The Elderberry in Popular Culture: In Monty Python and the Holy Grail, a character insults King Arthur and his Knights by telling them that “their father smelt of elderberries.” The Elder Wand in Harry Potter is especially powerful, and elderberry wine was mixed with the poison of choice in the play Arsenic and Old Lace.