Isn’t this a spiffy little bug (and, yes, the word “bug” is correct, for a change, because it’s in the bug order Hemiptera)! 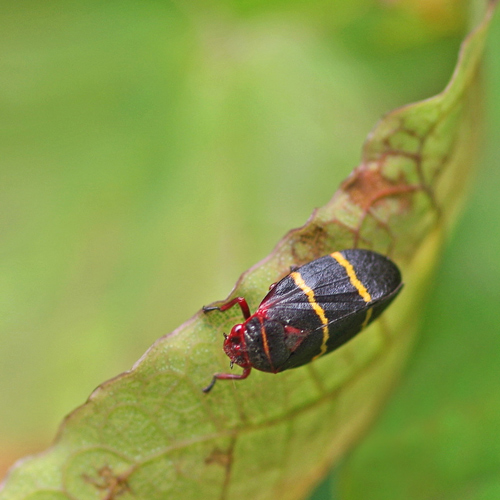 Two-lined spittlebugs (Prosapia bicincta) are in the family Cercopidae, aka the Froghoppers. Why? Because their main mode of transportation is jumping, and they do it well – some can leap almost three inches straight up and more than 100 times their own body length in a single bound (that takes care of the “hopper” part, but the BugLady still doesn’t think they look very froggy – in fact, the adults are more reminiscent of cicadas). For the physics of it, check this out.

Spittlebugs get their name from the nest of bubbles produced by the nymph (immature bug). Like aphids, spittlebug nymphs feed on juices that they access by poking their piercing-sucking, beak-like mouthparts into plant tissue. Plant sap is sugary, but not overly so, and so they have to take in a lot of it to get enough calories. What to do with the rest? It goes out the other end, where the clever spittlebug adds some “glandular secretions” (OK – mucopolysaccharides, polypeptides, and acid proteoglycans) and repurposes it. 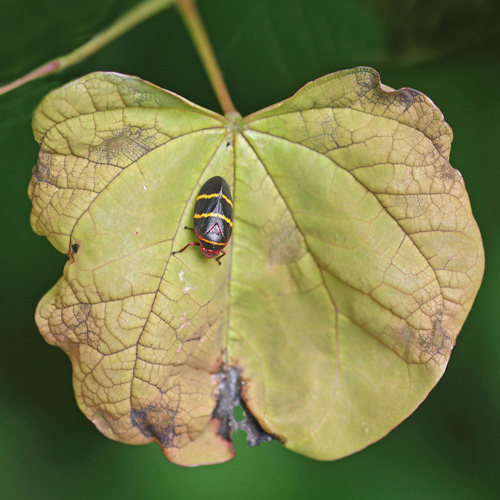 As the excess liquid exits, the nymph pumps its body up and down, which aerates the liquid (shaken but not stirred?), and then the nymph spreads the foam over its body. The bubbly mass has gathered names like “cuckoo spit,” “frog spit,” and “snake spit,” especially from the young at heart. The BugLady (and a whole lot of other people) have been telling folks for years that the soft-bodied nymph does this to provide a high-humidity home for itself, as well as for insulation and camouflage. Some scientists suggest that the foam may help with electrolyte regulation, and that along with predators, the nymph’s disguise may discourage parasitoids, and pathogens like fungi and bacteria, but that it is not an efficient humidifier.

TLSBs lead small and unobtrusive lives, except when they occur in large numbers, and then they are considered (minor) pests. The nymphs target grasses, including turfgrass, and can cause wilting. Adults feed on the same food in the same manner (they add the leaves of some woody plants to their menu), and they can damage leaves by injecting a chemical that damages chlorophyll in a small area, resulting in wilt and in mottled white patches on the leaves (“froghopper burn”).

Adults feed on the same food, but they have lost the ability to make bubbles – see the video of an adult froghopper dripping honeydew (this article also has a nice picture of a nymph). They are not, however, defenseless; they are aposematically colored, both above and below, with red and yellow – Mother Nature’s warning colors.

Like ladybugs, lightning beetles, and others, TLSBs can initiate “reflex bleeding” – in their case, from the pads of their feet (note the classy, red ventral side of the bug). This liquid (insect blood is called hemolymph) has been labeled “sticky,” “smelly” and “distasteful,” and it deters but doesn’t completely discourage predators. The substance may work because it startles the predator and allows the froghopper time to hop, but one source said that when ants come in contact with it, they stop bugging the bug and start grooming themselves.

TLSBs are eaten by other animals. The eggs are most vulnerable, and nymphs are, too, if their nest is destroyed. Some songbirds, spiders, and assassin bugs dine on the adults.

Females attract males via pheromones, and they mate throughout much of the summer. Eggs are laid in the soil or in hollow plant stems, and there the TLSB overwinters. The nymphs prefer to live in heavy thatch; they like damp, not drought. They feed for a month as nymphs before they climb up on a grass stem and shed their final, nymphal skin along with its now-dry, bubbly covering. Here are pictures of a newly emerged (eclosed) adult and of its recently-vacated skin (exuvia) https://bugguide.net/node/view/691740/bgimage.

TLSBs are found all over the eastern half of the country, west to Kansas and Oklahoma, but they are most common in the Southeast.