What an interestingly-shaped and subtly-colored moth! The Green Cloverworm Moth, a.k.a. the Black Snout, is found in waste spots, road edges, grasslands, agricultural areas, and gardens east of the Great Plains. It comes in several neutral shades, and females are more distinctively marked than the males. The wingspread is about 1 ¼ inches, and the aforementioned pointy “snout” is formed by sensory mouthparts called palps. 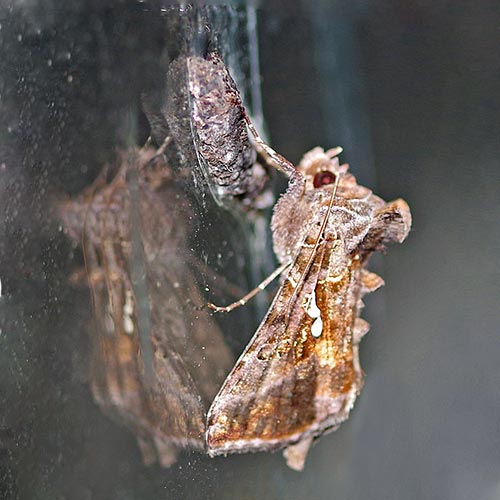 Adult GCLs (Hypena scabra) (family Erebidae) nectar on flowers, and their caterpillars enjoy an assortment of cultivated and wild plants in the clover/pea family, including alfalfa. Increasingly, they are associated with soybeans. Caterpillars feed by skeletonizing the leaves, starting with the lower surface, and, as they get larger, eating through the leaves, except for the veins.

The folks who measure these things tell us that each caterpillar will eat about 21 square inches of leaves on its way to adulthood, but because GCMs appear early in the growing season, the plants generally re-foliate. One plant can entertain up to eight caterpillars before they become problematical, but GCMs only reach those densities every 10 or 15 years. They occupy an interesting spot in the food chain—their presence is tolerated because they serve as hors d’ oeuvres for a bunch of predators like damsel bugs, tachinid flies, Ichneumon wasps, and a number of other carnivores and parasitoids that whet their appetites on GCM caterpillars and go on to control some of the really important crop pests later in the season.

Development is fast, with about a month between egg and adult, and there are multiple generations per year. It’s too cold here in God’s Country for GCMs to overwinter (the cut-off line seems to be central Illinois), so GCMs migrate to Wisconsin each spring, possibly aided by winds and weather fronts from warmer climes.

GCMs have, on occasion, hopped across The Pond and appeared in Europe in connection with shipments of American soybeans. A single specimen was collected near London in 1956, and according to a German insect site, “Recently, several specimens were taken at Bilbao docks, N Spain, on June 1998, where ships download American soya, the main foodplant of H. scabra….The moth was abundant around the docks for at least a couple of days, but then disappeared and was never observed, again.” Despite their obvious interest in soybeans, most sources consider them “of minor importance,” and “rarely a problem.”

Two behavioral idiosyncrasies of the GCM—First, the adults, which are nocturnal and which hide in the vegetation during the daylight, play dead when startled, dropping to the ground as if they’d had The Big One. Second, the caterpillars “thrash violently when disturbed” (which is actually offered as a way to distinguish them from other soybean caterpillars). 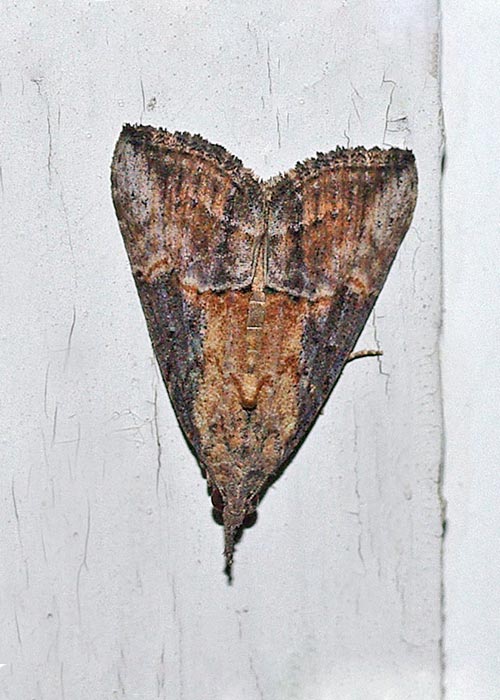 Although it’s in a different moth family, the Common Looper Moth (Autographa precationis), has a number of things in common with the GCM. It occupies about the same territory as the GCM, occurring as far west as Kansas and Wisconsin. Like the GCM, the CLM produces multiple, fast-growing generations from mid-spring into fall, and its caterpillar is cold-intolerant, recolonizing the northland each spring. CLM caterpillars are even more generalist feeders than GCM larvae, enjoying low-growing members of the aster, mustard, and verbena families, plus clover, hollyhock, beans, cabbage, and plantain (they’re sometimes called the Plantain Looper).

This moth might actually be any one of a half-dozen, very similar members of the Plusiinae subfamily in the Owlet moth family Noctuidae, but the BugLady thinks that it’s a Common Looper Moth; the caterpillars in this group are pretty challenging to ID, too. CLM caterpillars are homebodies, hatching, feeding and pupating within a very small area.

Dandelions are a favorite larval food, but dandelions have a bitter, milky, sticky sap. CLM caterpillars use a strategy called “trenching” to deal with the sap. They slash the midrib of a leaf at its base or girdle the stem, interrupting the flow of sap, and, with hydraulic pressure defused, they feed above the cut.

Spoiler Alert – BugFans who are distressed by the practices of parasites and parasitoids might want to look away. Wagner, et al. in Owlet Caterpillars of Eastern North America, have this to say about caterpillars of the subfamily Plusiinae, “Among their natural enemies are polyembryonic encyrtids, minute wasps whose eggs clonally reproduce themselves once inside the host’s body—thousands of eggs will develop from one ‘parent’ egg. Seemingly the whole of the caterpillar’s body is replaced by the bodies of the next generation of microscopic wasps.” The BugLady nominates this for the X Files Award.