In this, the fourth Annual chorus of “The Twelve Bugs of Christmas,” the BugLady offers a Bakers’ Dozen of Bug Portraits that were taken this year but are unlikely to appear in future BOTWs because their stories have been told in past BOTWs (hence, the links, for BugFans who want to know “The Rest of the Story”). They are, as always, a testament to the joys of Serendipity.

Crane Fly with Ornaments—Lots of immature aquatic insects host water mites. The parasitic larval and early nymphal stages of the mites attach themselves to an insect when they’re both under water and then feed on it like a tick (to whom mites are somewhat related). When the insect molts, the mite steps off, and then reattaches after the molt is complete, which is why we see adult dragonflies and damselflies—and crane flies—with those little bits of red “bling” attached to their thorax or abdomen. Crane Fly Redux (Family Tipulidae), and Water Mite (order Acariformes). 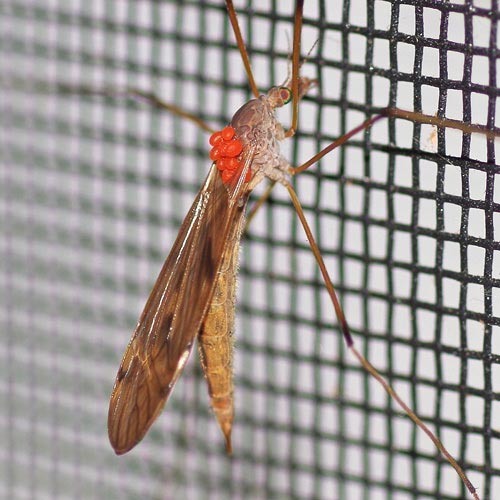 Deer Ticks? Oh, surely, tick season is over? In late October, the BugLady took a tick off of the dog and realized that it had too many legs. The smaller (male) tick was piggy-backed on the larger female. Deer ticks are pretty hardy, and they may be out and about during a mid-winter thaw Deer Tick (Family Ixodidae). 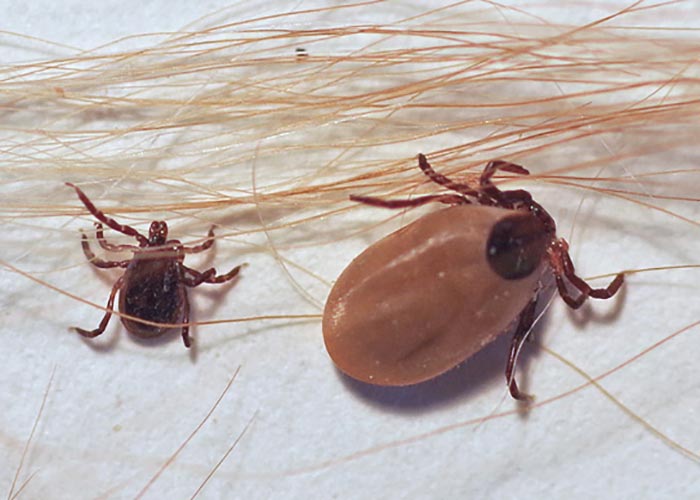 There’s just something about a Bumblebee dangling under a flower (or climbing over the top of one) that makes the BugLady reach for her camera. There are a number of blossoms, especially in the legume/pea/bean/clover family that require an insect with a bumblebee’s “muscle” to push into the flower. And then, they’ve got that “buzz pollination” thing going on “Bumble Bee (Bombus sp.)”, and Celebrating Bumblebees (Family Apidae). 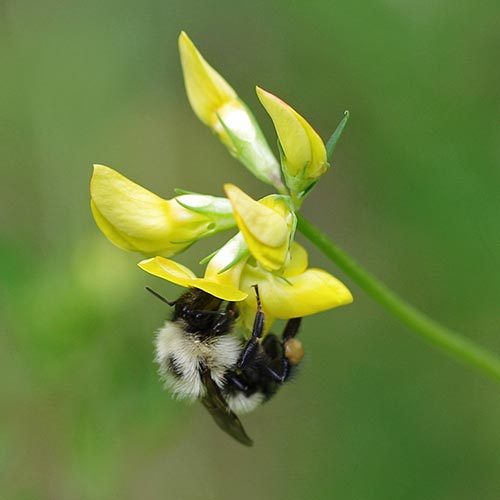 This Red-Spotted Purple Chrysalis hung on the back of the BugLady’s garage this summer. Chrysalis? Cocoon? Synonymous? When a butterfly larva sheds its skin for the last time as it pupates, the layer of hardened protein below that last skin forms a case for the pupa. That hardened skin is referred to as its chrysalis, but Lepidopterists also use the term chrysalis as a synonym for the pupal life stage itself. A cocoon is a shelter of silk that is spun before an insect enters the pupal stage, and the pupa and pupal case form within. With few exceptions, butterflies don’t spin cocoons; many (but not all) moths do, and so do some other kinds of insects, Red Spotted Purple (Family Nymphalidae). 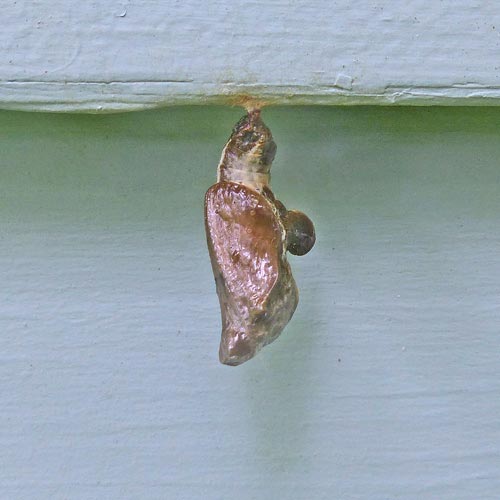 Two-Striped Grasshoppers (a.k.a Yellow-striped grasshoppers) (Melanoplus bivittatus) are large and handsome grasshoppers of grasslands and road edges (the two, pale lines running down their dorsal side from stem to stern makes them pretty easy to ID, too). Their overall yellowish tinge comes from nutrients in their diet which includes some agricultural crops and (less often) grass (they dabble in scavenging and cannibalism, too). They’re spur-throated grasshoppers in the short-horned (short-antennae-ed) grasshopper family Acrididae, Melanoplus Grasshopper (Family Acrididae). 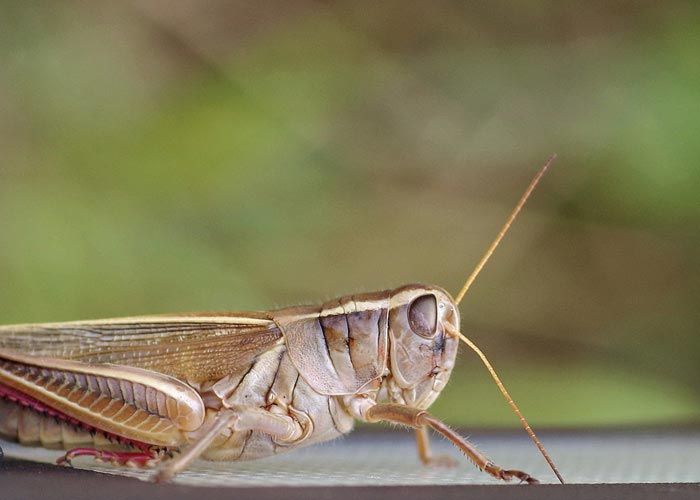 A glamour shot of a cooperative Long-Jawed Orb Weaver (genus Tetragnatha) a common spider of wetlands. Its name comes from the extra-long jaws (chelcerae) of the adults Long-jawed Orbweavers (Family Tetragnathidae). 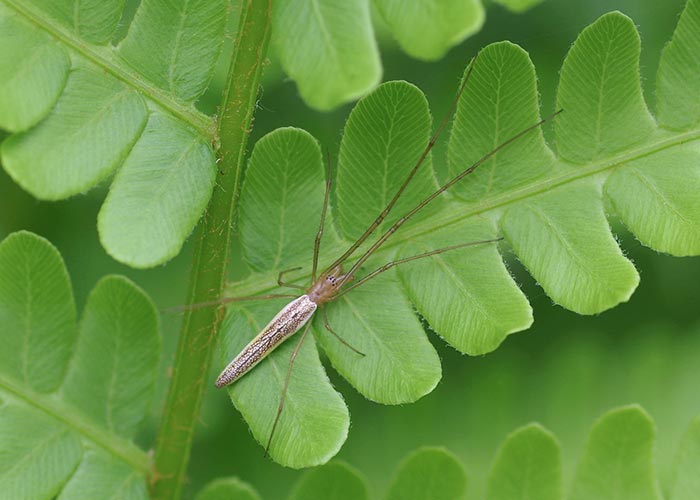 Hitched Arches Caterpillar—The BugLady enjoys the dramatic bed-of-nails backgrounds provided by the disc flowers of a purple coneflower. It’s all a matter of perspective, though—when it gets older, the caterpillar will eat flowers this size, practically in one sitting. Bugs Without Bios VII. 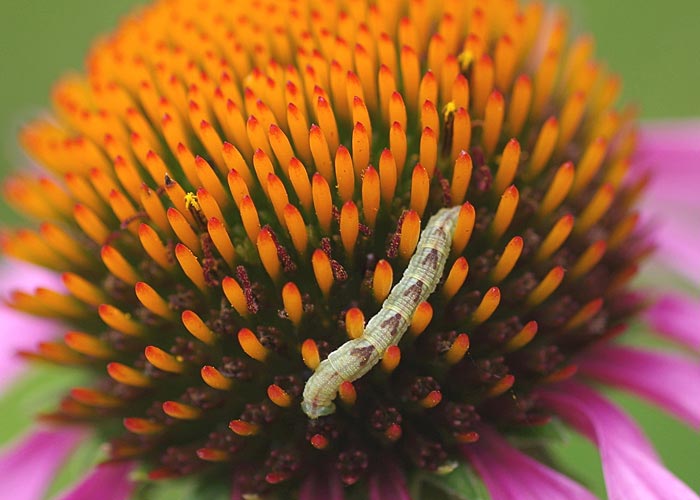 The BugLady has been wanting to get a shot of Common Green Darners ovipositing for a long time. At about 3 inches long with a 4-inch-plus wingspread, these are some of our largest dragonflies. The female is probing under water for vegetation into which she’ll insert her eggs; he is “contact guarding” her in order to protect his investment in the process. If an insect can look wild, these darners surely do, Dragonfly Swarm (Family Aeschnidae). 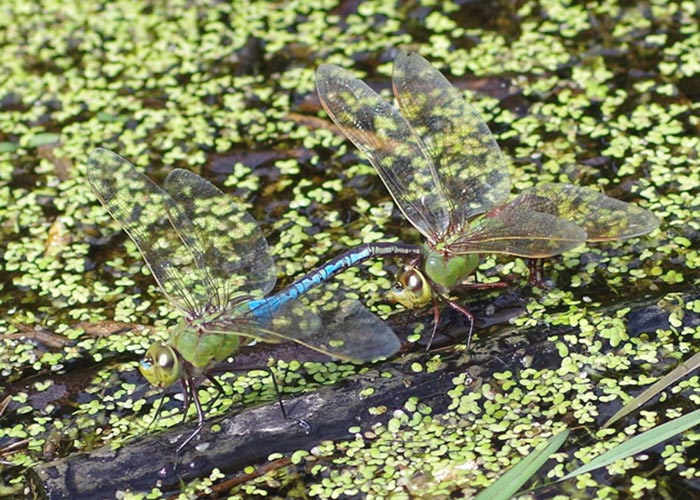 Sedge Sprites, on the other hand, weigh in at maybe an inch, each, and a skinny inch at that. The BugLady stuck her head into lots of sedge sprite microhabitats and found a bunch of them this year (but she’s still looking for the elusive, almost identical Sphagnum sprite), Sedge Sprite (Family Coenagrionidae) 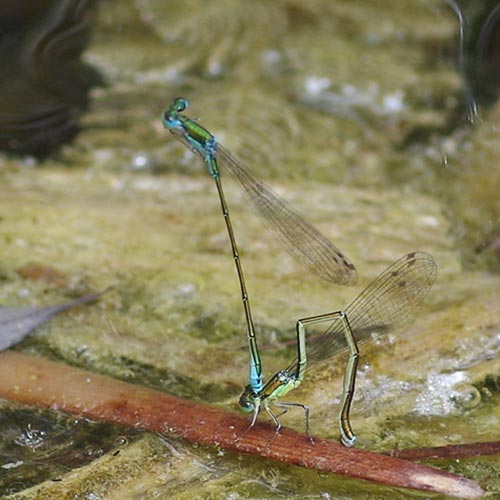 The BugLady re-photographs lots of bugs from year to year, hoping for a better shot (and, yes, because they’re there), ahe’s really happy with this flesh-and-blood Daphnia. She sits on the Aldo Leopold bench by the Ephemeral Pond at Riveredge (from whence many good things spring, armed with a camera and 50mm macro lens in one hand, and an aquatic critter in a plastic spoon in the other (she carries a black spoon for pale bugs, ever since that fateful day when she scooped up a white planarian). Daphnia, which are generally (way) less than 3/16 of an inch long, provide food for LOTS of amphibians, and they’re cool because when there’s heavy pressure from predators, daphnia grow spines that discourage them Daphnia (Family Daphniidae). 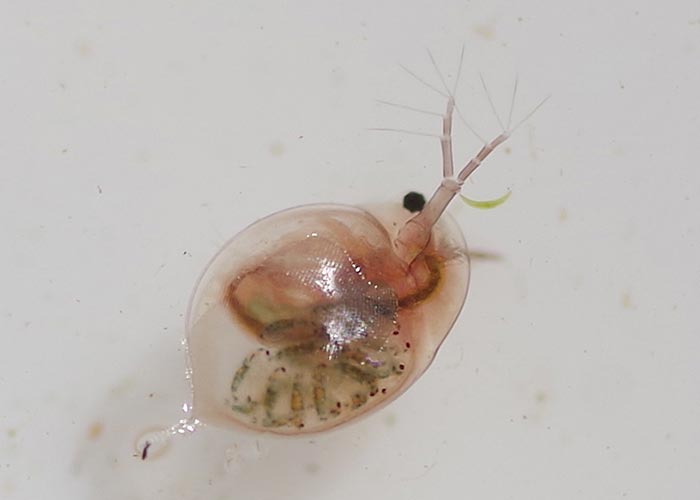 A Water Strider rests on a cattail leaf during its constant patrol of the open water. Often misheard by kids as “Water spider,” they are called Jesus-bugs in some parts of the South because they walk on water (with the aid of some hairs on the “soles of their feet” (tarsi), they move across the water without breaking through the surface film). They are predators who hunt by using their front legs to sense the ripples produced by insects that flew too close to the water and are struggling in that same surface film. And is that a water mite lurking beneath the cattail leaf? Water Strider Revisited (Family Gerridae). 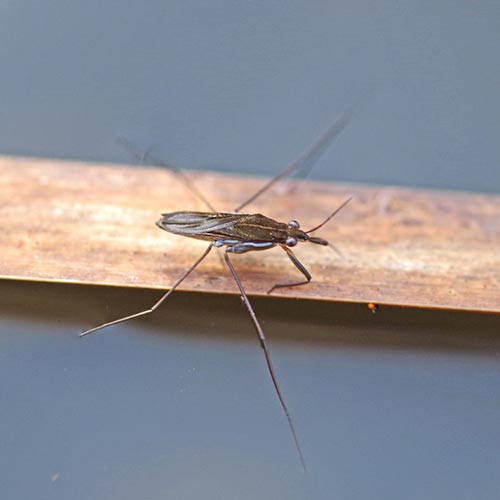 This Lunker-Larva crossed the BugLady’s path as she was walking on a slightly raised trail between two wetlands.  To say that she was startled is an understatement. First of all, while it has the classic shape of a Dytiscid (Predaceous diving beetle) larva (the larvae are called “water tigers”), it was several orders of magnitude larger than the largest water tiger the BugLady has ever seen. In fact, it was the size of the BugLady’s little finger!  Second, it was really speedy; the BugLady would scoop it up with a piece of paper (no, she didn’t feel like handling it) and get a single shot before it escaped over the edge. And third, it had this awesome, tough and shiny exoskeleton.  Mature water tigers leave the water and pupate in chambers at the water’s edge. They don’t need an exoskeleton like that to live under water – do they don it just for that brief journey? Predaceous Diving Beetle (Family Dytiscidae). 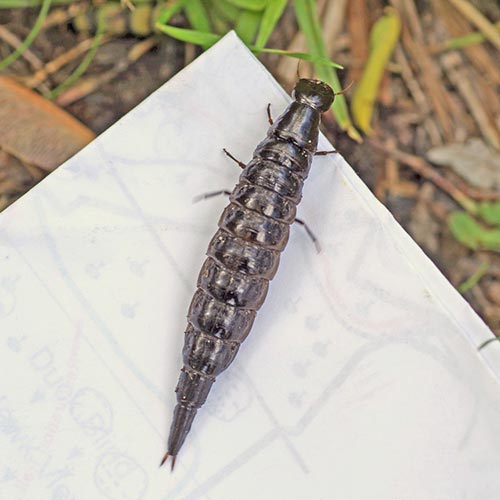 Last, a Dot-Tailed Whiteface Dragonfly to dangle from the Christmas tree. This teneral (recently emerged individual) lacks the intensity of color that it will soon develop as an adult Dot-tailed Whiteface (Family Libellulidae). 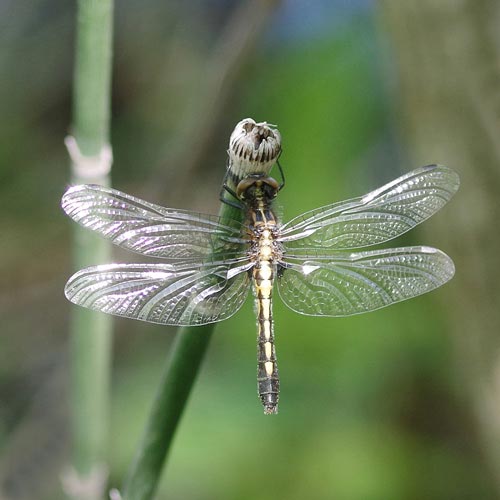 And, for a little lagniappe, here are a few videos of dragonfly naiads trying for a meal: https://www.youtube.com/results?search_query=dragonfly+nymphs+hunting.