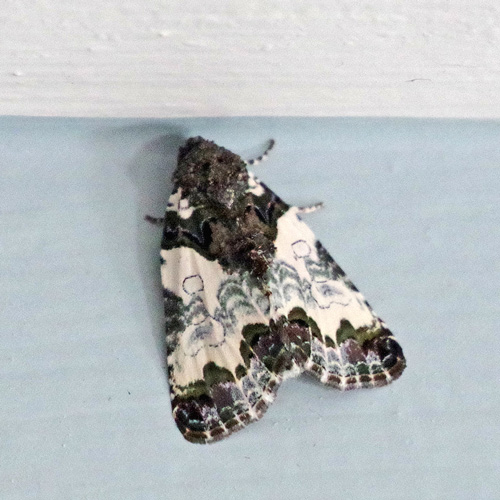 The BugLady was visited by another moth recently, this time a Tufted Bird-lime/Tufted Bird-dropping Moth/Cherry Agate (Cerma cerintha) that appeared in her bathroom and, later, in her kitchen. It’s a lovely little moth with a one inch-ish wingspan, in the Owlet moth family Noctuidae.

Noctuids are called Owlet moths because of the way the light reflects off the eyes of the (often drab) adults. Many of the moths are nectar feeders and are pollinators; many of the caterpillars are omnivores, relishing both foliage and their fellow invertebrates, and sometimes are cannibalistic. These are the fruit worms, cutworms, and armyworms that feed on the leaves of agricultural crops. Caterpillars of many Noctuid species have chemical defenses, gleaned from the foods they eat, and others use camouflage, mimicry or spines to protect themselves. Adults have tympanal organs (“ears”) that allow them to detect bat radar.

Depending on whose field guide you have, TBLMs are in the subfamily Acronictinae, or in the subfamily Eustrotiinae. About the confusion, Sogaard, in Moths and Caterpillars of the North Woods says “The taxonomy of the superfamily Noctuoidea (which includes…… Noctuidae) is in disarray. It will likely take a decade or more of work before the smoke clears from a truer, more stable taxonomy.” About the Eustrotiinae, David Wagner, in Caterpillars of Eastern North America, says “members of this subfamily were formerly classified with the bird-dropping moths (subfamily Acronictinae). Eustrotiines are a heterogeneous (unnatural) assemblage without any shared diagnostic adult or larval characters.” You get the picture. There are three members of the genus Cerma; here’s an even fancier one. 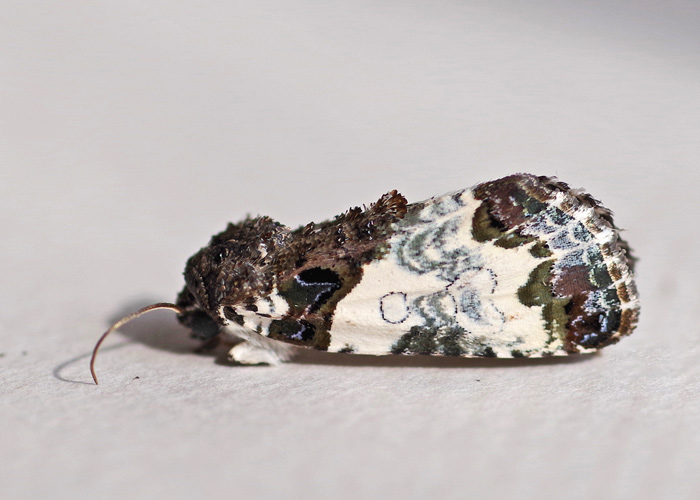 TBLMs are found in the US east of the Great Plains and across southern Canada east of Manitoba. Wagner says that they favor “barrens, fields, sandy openings, and woodland edges.” They are fairly common, but their lifestyle hasn’t been studied much.

TBLM caterpillars eat the leaves of fruit trees in the rose family, especially cherries and hawthorns. West Virginia blogger/photographer “Squirrel” observes that the moths are found around fruit trees, and so are fruit-eating birds, so the bird poop strategy is a good one. Their camouflage is so good that, Sogaard says “I once brought a specimen home from the lighted side of a building only to find myself fooled by a bird dropping!”

Young caterpillars start out green (nice series here) and then develop a carmine stripe that provides effective disruptive coloration. They have a pretty impressive rear set of prolegs (“fake,” hydraulic legs for grasping). 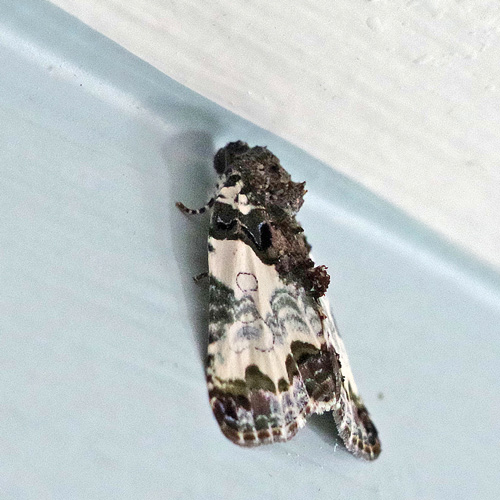 There are two generations of TBLMs in the south, but probably only one here in Wisconsin. The BugLady couldn’t find much about their reproduction, only that a mature caterpillar creates a pupal chamber by chewing a tunnel into wood, turning around, and sealing the entrance with wood chips and silk, making it, says Wagner, “virtually undetectable.”

Two cool things about Tufted Bird-lime Moths:
First, Wagner, et al tell us in Owlet Caterpillars of Eastern North America, that “upon disturbance, caterpillars of the Cherry Agate…..may shake rapidly from side to side. Cerma caterpillars will wriggle violently if handled and are quick to hurl themselves from their purchase.”

Second, female Noctuids summon males with chemical scents called pheromones, and males preform courtship “dances.” Males of many nocturnal species of moth, including the Noctuidae, produce scents that are disseminated by various configurations of “scent brushes” that are associated with eversible glands. When a female emits pheromones to call to males, the males respond by approaching the female from upwind and sending out their own perfume. This, in some species at least, prompts the female to stop calling. His scent may serve to confirm a species match as well as to turn her head. In the lovely science language of a century-plus ago, “Scent fans are the perquisite of the males of many of the Noctuina whose eyes shine at night like those of the barn owl as they winnow the dewy flowers” (A.H. Swinton, 1908).

And, for the BugFan who has everything, a TBLM mousepad is waiting for you on the internet.