Life is still way too busy, so here’s re-researching of an episode from 2008 about a spectacular group of beetles called the tiger beetles.

Tiger Beetles (family Cicindelidae) are a pretty spiffy family of beetles; some are green, some brown to maroon, some have patterns (which can be variable within a species) and some don’t, and the ghost tiger beetle is, well, ghostly. They have long legs and similar shapes. There about 2,600 species worldwide; more than 100 in North America. They typically like semi-bare, open habitats with loose/sandy soils. In a world where insects are not studied unless they are economically important or they are charismatic, tiger beetles fall squarely in the second category (though the awesome Galveston County Master Gardeners site lists them as beneficial in the garden, too). 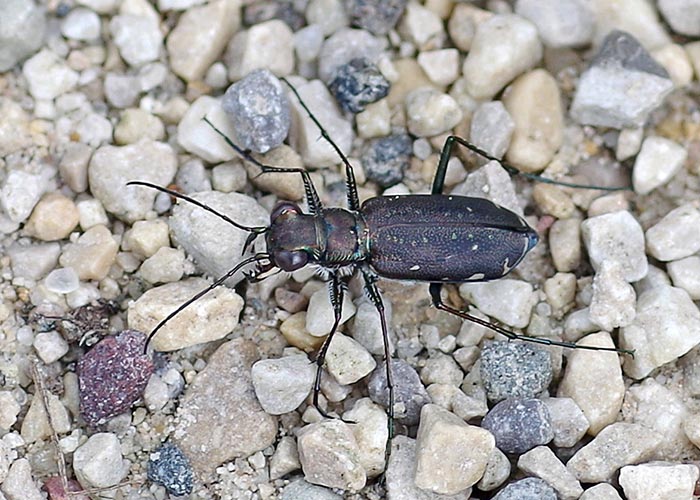 Adult tiger beetles are described by Eaton and Kaufman in their Field Guide to Insects of North America as having “wicked jaws and bulging eyes.” Those big eyes have acute eyesight, useful in running down prey and finding a mate. TBs (the beetle, not the disease or the professional football team) chase down their prey, overtaking them, grabbing them with their pinchers, and banging their little bodies against the ground to kill them. Like spiders, they inject digestive enzymes that allows them to suck out the tender-bits.

Adult TBs are seriously fast runners (ask any insect photographer)—some species reach 5 miles per hour, which is a vigorous walk for a human—and they are speedy, albeit low-altitude, flyers. They are able to catch prey in either medium. They feed on insects like flies, ants, caterpillars, springtails, and small grasshoppers, and on spiders and other small invertebrates. They are, in turn, eaten by birds, dragonflies, frogs, robber flies, and small mammals. Their bright elytra can be surprisingly cryptic, and some species release a defensive odor.

Like some dragon and damselflies, male TBs “contact guard” their ladies after mating—he grabs her thorax with his jaws and rides piggy-back as she oviposits, protecting his genetic investment against raids by other suitors.

The eggs are laid singly, in holes excavated by Mom and covered over when her egg is inside. Beetles have “complete” metamorphosis—their path to maturity passes through egg, larval and pupal stages before reaching adulthood. The carnivorous grub (beetle larvae are referred to as grubs) has a unique method of hunting. It digs a vertical tunnel using its mandibles to loosen soil and its head to bulldoze soil particles to the surface. Then it braces itself against the walls, staying snugly in place thanks to a hooked hump on the back of its abdomen, its flat face flush with the surface of the ground. When a customer gets near enough, the TB flips back its head and grabs passer-by with its sickle-shaped jaws, and pulls it inside.

The tunnel starts out narrow, but it grows as the grub eats, maxing out at about the diameter of a #2 pencil. The industrious grub keeps the area immediately around the lip of the tunnel clean of debris. In its first summer, the burrow may only be a few inches deep, but because most native species overwinter as grubs, the hole is extended below the frost line in winter. Though you may find a tunnel, you will rarely see a grub, because the vibrations from your tread send them underground. TB larvae pupate in the tunnel, too, and according to some sources, the adult shelters in its larval tunnel at night and may overwinter in it. 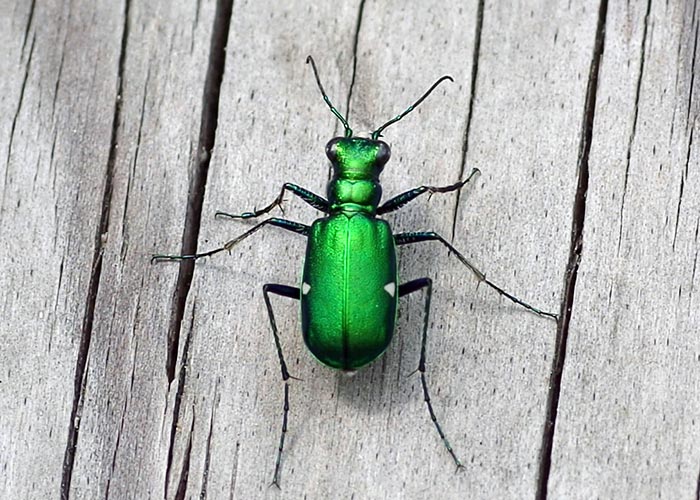 The BugLady learned a dynamite TB fact when she was re-researching this beetle. TBs, like the Roadrunner of cartoon fame, run so fast that everything becomes a blur. The scientific explanation is that their speed exceeds the ability of their eyes and brains to make and process an image. They’re running blind, temporarily. So—two questions. How do you capture prey when chasing it makes you lose your sight, and what keeps TBs from smacking into things, like Wiley Coyote?

First, TBs chase, then stop and relocate their prey, then run, then stop, etc. According to a National Geographic article, “tiger beetles don’t mind because… well… they are really, really fast. They can afford to stop in the middle of a chase because they are so ridiculously quick when they’re in motion.”

And the running-an-obstacle-course-with-your-eyes-closed part? It seems that the TB holds its antennae ahead stiffly like a Victory sign, at an angle slightly above horizontal. It is, in the words of researcher Daniel Zurek, “permanently in collision mode.” The antennae encounter an obstacle, the tips of the antennae bend back, the TB angles its body up, and over it goes. The other methods of handling the problem – evolving more sensitive eyes and/or a larger brain, would be very “expensive”, energy-wise.

The green beauty is a Six-spotted Tiger Beetle (Cicindela sexgutata) and it illustrates why people become life-long tiger beetle fans. SSTBs are a little less than an inch long and are found on open ground and woodland paths east of the Mississippi. The BugLady has seen them on sunny walls and rock faces whose heat attracts (fatally) other insects. One reference observes that the adults will fly ahead of walkers and will turn to face you; if you’ve ever stalked an SSTB, you’ll appreciate the comment from Donald W. Stokes in his excellent A Guide to Observing Insect Lives that this species is among the most approachable of tiger beetles. One of the SSTBs pictures is an over achiever with eight spots; another is an underachiever with two, and BugFan Mike has seen them with four and even zero spots (check out his tiger beetle site). 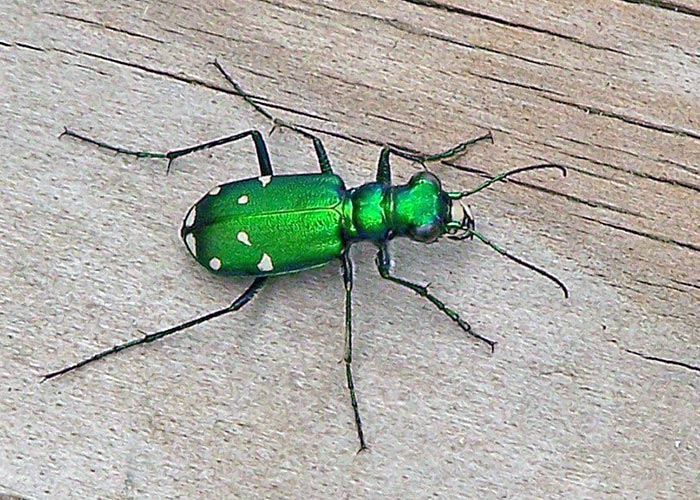 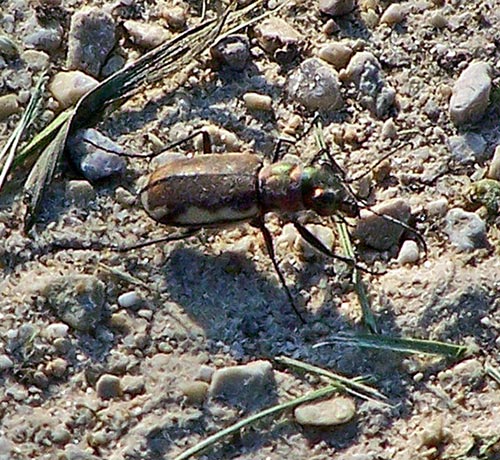 Scientists who study tiger beetles give them names like Splendid, Cowpath, Hairy-necked, Mustached, Puritan, Pan-American Big-headed, Senile, Lustrous Night-stalking, Dispirited, Cajun, Blowout, Punctured, Scabrous, Ocellated, Glittering, Festive, and Elusive Tiger Beetles, which suggests that the scientists themselves are a breed apart and that their annual convention could be a real hoot (possibly, they convene with the people who name underwing moths).