Tiger beetles (family Cicindelidae) are a pretty spiffy family of beetles; some are green (like the Six-spotted Tiger Beetle), some brown to maroon (like the Festive Tiger beetle), some have patterns (which can be variable within a species) and some don’t, and the Ghost tiger beetle is, well, ghostly. They all have long legs and comparable shapes.

Tiger beetles are wolves of the insect world and are described as having “wicked jaws and bulging eyes” (“all the better to eat you with, etc”). They spot and chase down their prey—ants, caterpillars, aphids, and other small invertebrates—overtaking them, grabbing them with their pinchers, and banging their little bodies against the ground to kill them. Then they suck out the tender-bits and eat some of the crunchy-bits.

Beetles have “complete” metamorphosis—like humans, their path to maturity passes through egg, larval and pupal stages before reaching adulthood. The carnivorous larva (grub) has a unique method of hunting. It digs a vertical tunnel and braces itself, using a hooked hump on its body, against the walls, its flat face flush (real fast, five times) with the surface of the ground. It darts out to grab passers-by and invite them to supper in the tunnel. The tunnel starts out narrow, but it grows as the grub has more and more company, maxing out at the diameter of a #2 pencil. The industrious grub keeps the area immediately around the lip of the tunnel clean of debris. When the grub is using it for hunting, the burrow may only be a few inches deep, but because most native species overwinter as grubs, the hole is extended below the frost line in winter. Though you may find a tunnel, you will rarely see a grub, because the vibrations from your tread send them underground. 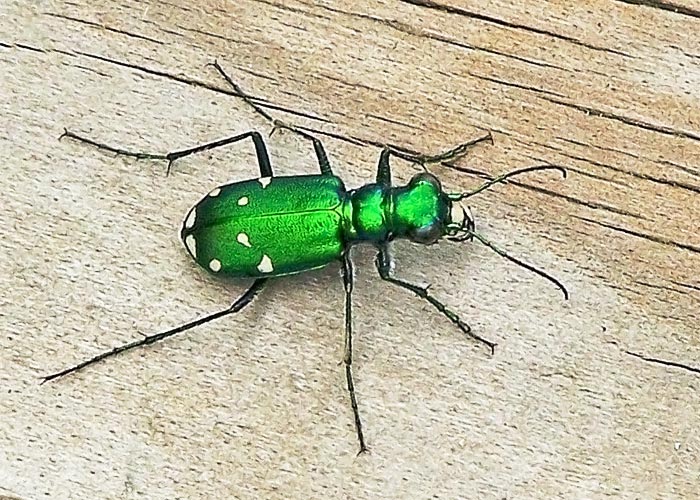 The emerald green Six-spotted Tiger Beetle (Cicindela sexgutata) illustrates why people become life-long Tiger Beetle fans. Six-spotted Tiger beetles are diurnal beetles and are about one inch long. They’re found on open ground and woodland paths east of the Mississippi. The BugLady has seen them on sunny walls and rock faces whose heat attracts (fatally) other insects. One reference observes that the adults will fly ahead of walkers and will turn to face them; if you’ve ever stalked a Six-spotted Tiger, you’ll appreciate the comment from Donald W. Stokes in A Guide to Observing Insect Lives that this species is among the most approachable of Tiger Beetles. 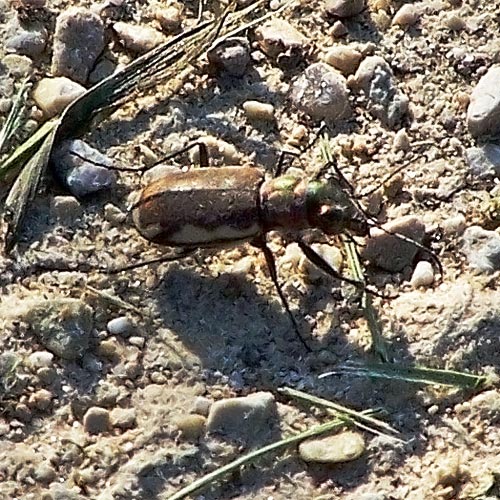 The subtly-iridescent Festive Tiger Beetle (C. scutellaris lecontei) was photographed stalking around the BugLady’s equally dusty driveway. Scientists who study tiger beetles give them names like Splendid, Cowpath, Hairy-necked, Pan-American Big-headed, Senile, Lustrous Night-stalking, Dispirited, Blowout, Punctured, Scabrous, Ocellated, Glittering, Festive, and Elusive Tiger Beetles which suggests that the scientists themselves are a breed apart and that their annual convention could be a real hoot.