Thyreodon atricolor (no common name), one of the BugLady’s “Nemesis Bugs,” is a big, beautiful wasp that flies tantalizingly through dappled, woody edges, preceded by those fabulous, yellow antennae. It seldom stops, and when it does, it often perches in the shade. The BugLady is gratified to see that lots of the shots submitted to bugguide.net are also out of focus, but here’s an excellent series. 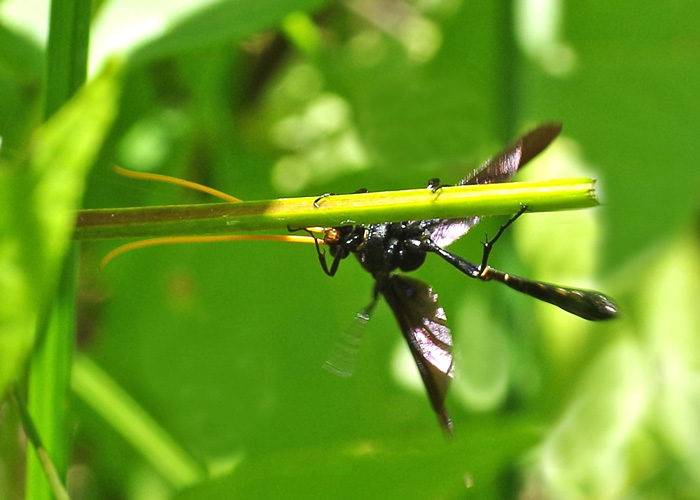 It’s in that huge family of solitary wasps, the Ichneumonidae (incorrectly called “Ichneumon flies” in olden days) – wasps that make their living as parasitoids of other arthropods, mostly insects. And they’re in the subfamily Ophioninae, which Wikipedia defines as “koinobiont endoparasites of larval Lepidoptera.” Wikipedia also tells us that the Ophioninae are uncommon among the ichneumons because of their ability to sting vertebrates (bugguide.net says that they have a “short, very sharp ovipositor” that can penetrate human skin).

A little Science. “Endoparasites” do their dirty work in the interior of their host – the exterior is reserved for “ectoparasites.” “Koinobiont” (vocabulary word of the day, but don’t ask the BugLady to pronounce it) refers to their practice of allowing their host to continue its development as they feed within it – most koinobionts are endoparasites. Conversely, “idiobiont” parasitoids, which tend to be ectoparasites, cause the development of their hosts to cease once they are on board (they’re riding around on the outside of their host, after all, and don’t want it to be too active and brush them off). In either case, the host is kept alive as long as it serves the parasitoid, which administers the coup de grace when it’s time to pupate. Sometimes, to add insult to injury, the parasitoid pupates within the dead body of its host. 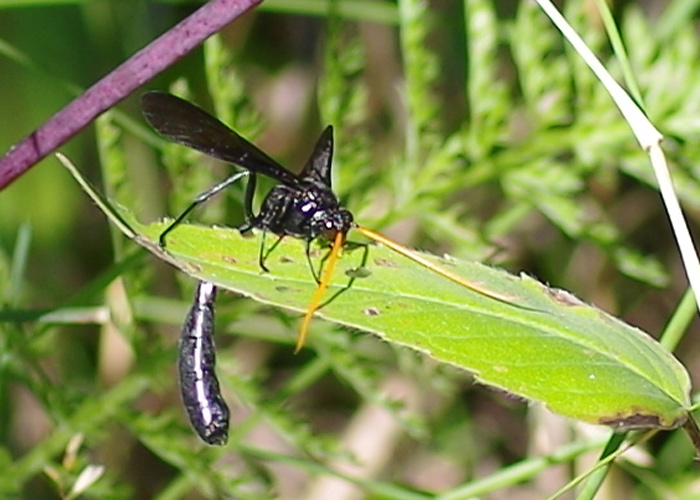 There’s not a lot of information out there about this species.

Like all good ichneumons, the very-distinctive Thyreodon atricolor has a look-alike. Its name is Gnamptopelta obsidianator, and about it, a bugguide.net expert says, “I also have a feeling most of the Gnamptopelta images in the guide are misidentified Thyreodon.”

Most ichneumons are very specific in their choice of a host for their eggs. Thyreodon atricolor is a big wasp, and she targets big caterpillars, those of the Northern and the Southern Pine Sphinx and the Blind Sphinx. 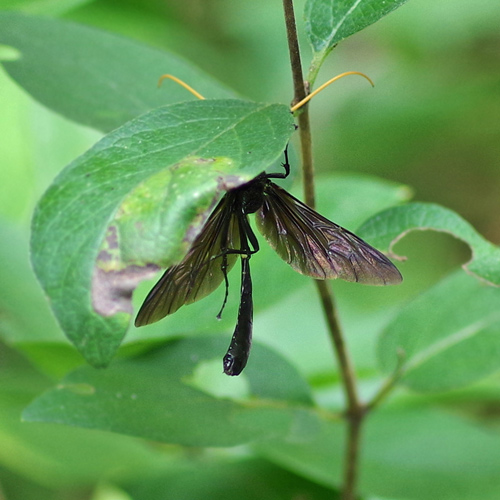 In an article written in 1912 called “The Ichneumon Flies of America Belonging to the Tribe Ophionini,” Charles W. Hooker summarizes what was then known about what transpires when wasp meets host:

“Trouvelot describes the oviposition of Eremotylus macrurus as follows: ‘When an Ichneumon detects the presence of a worm she flies around it for a few seconds, and then rests upon the leaf near her victim ; moving her antennae very rapidly above the body of the worm, but not touching it, and bending her abdomen under the breast, she seizes her ovipositor with her front legs and waits for a favorable moment, when she quickly deposits a small, oval, white egg upon the skin of the larva. She remains quiet for some time and then deposits another egg upon the larva, which only helplessly jerks its body every time an egg is laid”

[N.B. – no matter how blameless the rest of his life might have been, Trouvelot will forever be remembered as the French entomologist who imported gypsy moths to the US – on purpose – to develop a domestic silk industry].

Dr. Felt adds that ‘A few days later they hatch and the larvae eat their way under the skin of their victim, feeding on the fatty portions of the host at first, but later most of the tissues are devoured. The miserable victim of these parasites drags out a weary existence and usually perishes in the pupal state, rarely before. As a single victim will provide food for the development of but one or two parasites, the weaker ones perish.’”

When the host larva is mature and has created a pupal chamber, the wasp larva goes into a feeding spurt that finishes off its host; then it chews its way out and pupates in the readymade chamber of the caterpillar.

“Nothing is known of the food, mating habits, etc., of the adults, but it is possible that they feed on decaying animal and vegetable matter, since Dr. Ashmead states that they are attracted to such substances. Morley states that ‘many kinds of Ophioninae, including the big red Ophion luteus, are freely attracted by sugar. No insect is more fond of sweets, and none more indifferent to bright colored flavorless objects than the Ichneumons. The common Ophions may often be taken around evergreens where they seem to be attracted by the resinous juice.’”