The summer of 2012 was a bust, insect wise, but a slow recovery seems to be happening in 2013. The BugLady has photographed three beetles this summer that she’s never seen before (well, four, if you count that really out-of-focus long-horned beetle).

Recently, BugFan Becca sent the BugLady a blush-worthy photograph of two orange beetles cavorting on a flower near Mequon, WI. The BugLady found her own orange beetles a few days later, not far from where BugFan Becca had seen them. They had the look of a Soldier beetle (Soldier beetles are so-named because the bright colors of some species remind people of Guardsmen’s uniforms. Ditto, Soldier flies.). 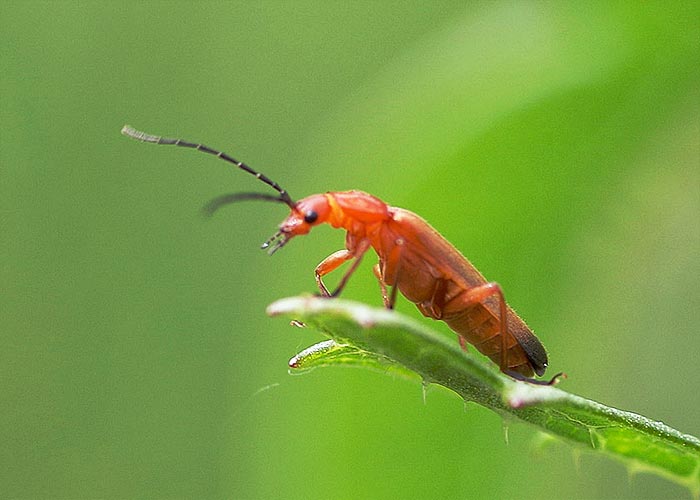 When she found them at Bugguide.net, she noticed that of the 40 Red Soldier Beetle pictures posted there, all but one were taken in Washington State or on the east or west coast of Canada. The lone exception was a 2012 photo from Mequon, WI, and the expert who ID’d the beetle expressed surprise that RSBs were in Wisconsin (though another source says they are established across the northern states). 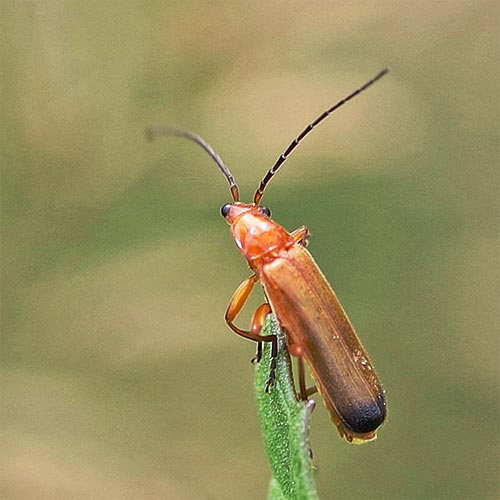 Like its familiar relative, the Pennsylvania Leatherwing, the Red Soldier Beetle (Rha fulvhagonyca) is found flagrante delicto so often that the British common name for this beetle, which is often seen on a plant called Hogweed, is the Hogweed Bonking beetle. Apparently, the name was added to an official entomological register as a joke, and there it stuck, despite the efforts of an incensed clergyman to dislodge it. Rule Britannia. Other names for them on the other side of the Pond are “Bloodsucker beetle” (it doesn’t, but it’s red—not all common names make sense, and people like to scare themselves) and the more sedate Black-tipped Soldier beetle. 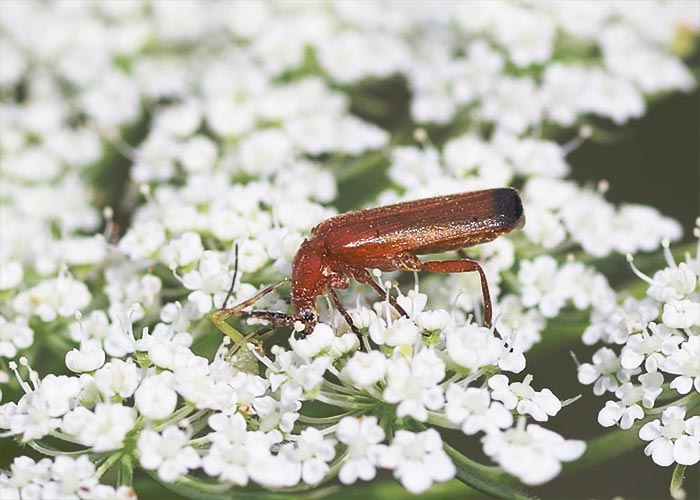 The RSB arrived on North American shores “some time ago,” but most of the information about this Eurasian beetle comes from British nature sites. The first chapters of its story here are just being written.

RSBs can be seen on flowers in grasslands, where they eat small, soft-bodied insects and maybe supplement their diet with pollen. Their larvae are carnivorous soil-dwellers that feed on snails, springtails, and other invertebrates they find there.

This Dichelonyx Beetle graced the BugLady’s porch light in mid-June. Members of the genus are in the same subfamily as May/June beetles, in the scarab beetle family. According to Bugguide.net, Dichelonyx comes from the Greek word dichelos which means “having two pincers, prongs or claws” and refers to its split claws (it’s got cool antennae, too). 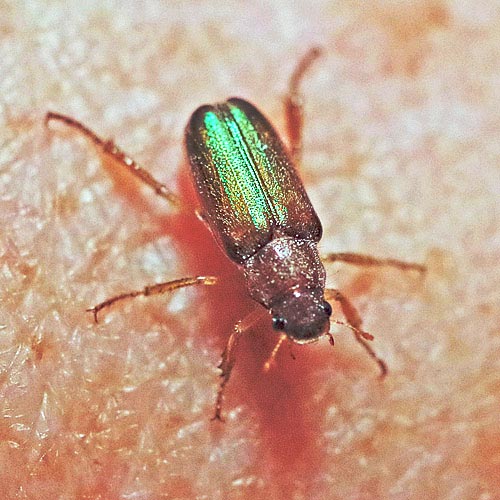 Dichelonyx species are found across much of North America, eating the leaves of a variety of plants, herbaceous and woody, deciduous and coniferous. They are, collectively, called “Chafers” and “Pine Chafers” (some other groups of beetles are, too), and while they may have population outbreaks that cause some noticeable defoliation, they’re rarely considered economically important. The larvae feed underground on the gamut of plant roots and take two or three years to mature. In one scholarly description of the larvae, the author noted that Dichelonyx grubs do not have stridulatory areas on their mouthparts. Stridulatory areas would allow the grub to make noise, and it always startles the BugLady that some larvae do so. 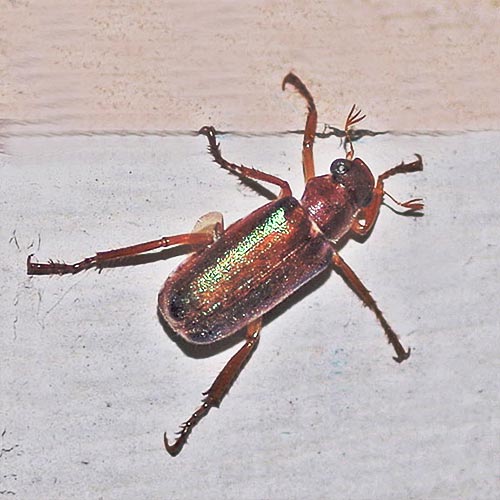 The BugLady doesn’t know which Dichelonyx this is. She’s leaning toward D. fulgida, whose adults have departed from the usual leaf-feeding habit to specialize in conifer pollen.

It seems that the BugLady cannot walk past a water lily, a milkweed, a wild orchid, a tiger swallowtail, a cicada, a long-horned beetle, a leaf where ants are farming aphids, and now, a cup plant without taking a picture. She loves Red Milkweed Longhorns (Tetraopes tetrophthalmus), whose romantic, leaf-top interludes rival those of the soldier beetles in conspicuousness and who, as singles and in pairs, enthusiastically bail (drop off the plant) when they see a camera. 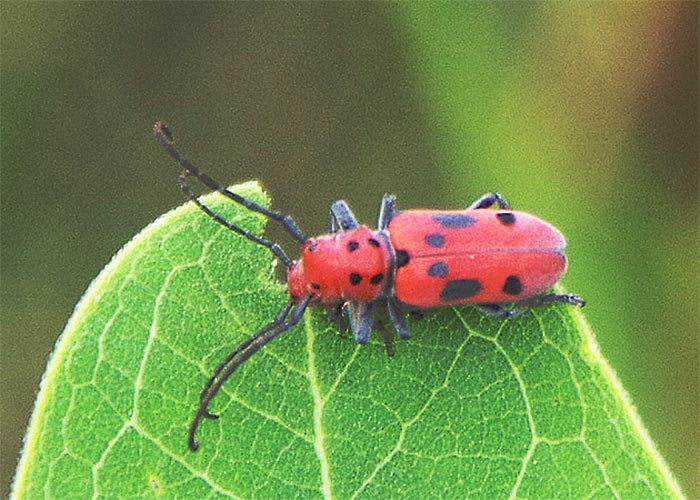 So she took this picture. And yes, there’s a lot of variability in the size of the spots within species, but look at those antennae!

Who is it? Not sure. There are two reasonable guesses: Tetraopes annulatus (no common name—annulatus comes from annulate, meaning having rings or ringlike segments.”) and Tetraopes femoratus (the Red-femured milkweed beetle), and their descriptions are similar. The BugLady thinks this is the Red-femured milkweed beetle, based on the length of the antennae and on the insects’ range. 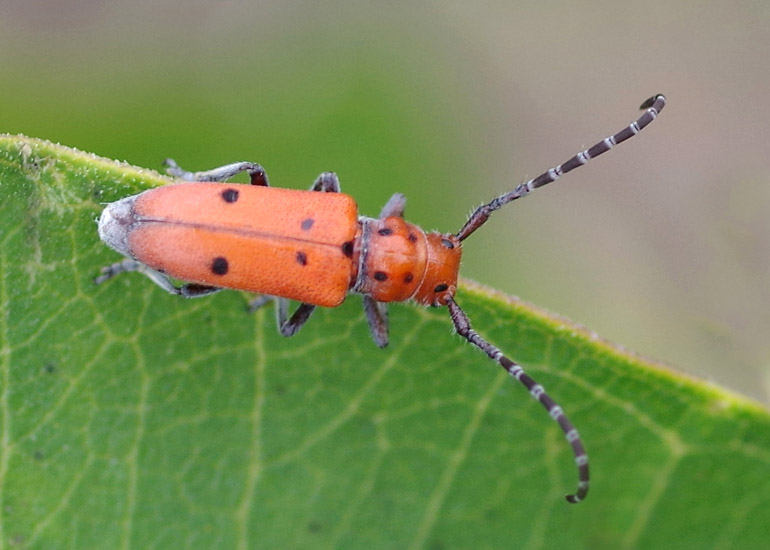 But here’s the rub, as The Bard would say. As seasoned BugFans know, milkweed longhorns have, over the millennia, divvied up the “territory,” and many specialize in only one or two species of milkweed. They eat the leaves; their larvae feed within the roots and stems, they sequester the toxic chemicals present in their host plant; and they advertise their subsequent toxicity with bright aposematic/warning colors. The Red Milkweed Longhorn likes Common Milkweed. Most sources list the Showy Milkweed (Asclepias speciosa) as the RFMB’s only food plant, and there’s precious little of that in Wisconsin. The BugLady finally found a few studies that place RFMBs on other milkweed species, including the very common Common Milkweed, and she also found some research that was done in northeastern Illinois and southeastern Wisconsin, where RFMBs were among the milkweed fauna observed.

The moral of the story? Look again.

Ten bonus points to BugFans who saw the crab spider in the RSB flower picture before the BugLady mentioned it. Any ideas on the long-horned beetle? 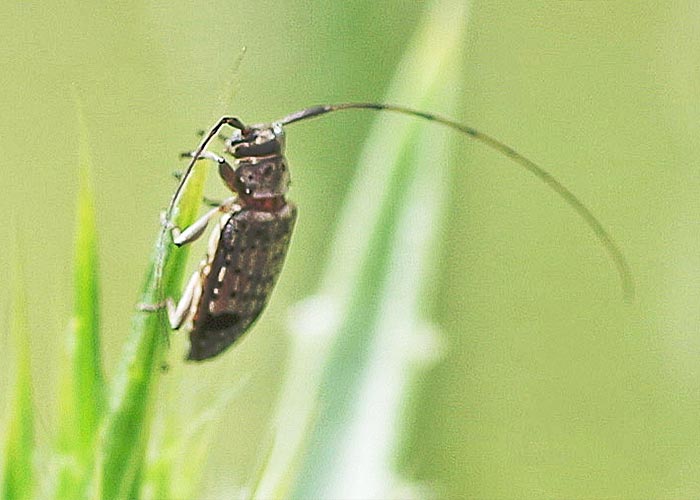