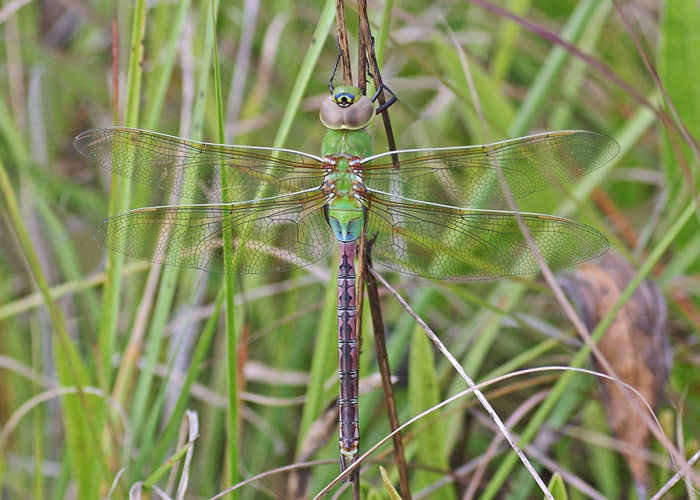 The BugLady has been out on the trail and has been enjoying the first butterflies and dragonflies of the season.  She walked the floating boardwalk at Horicon Marsh the other day – Common Green Darners everywhere!  Makes a person dream that spring might happen!

A genuine, though tentative, sign of spring is the reappearance of COMMON GREEN DARNERS, but the first sightings are usually not home-grown individuals.  COMMON GREEN DARNERS (family Aeshnidae) (whose scientific name, Anax junius, means “Lord of June”) arrive, often when the snow still lies in sheltered spots, as the insects they prey on take to the air.

The Green Darners that deliver the spring soon lay eggs that hatch into aquatic naiads that take the whole summer to mature.  When these offspring make the trip south in fall, their flights along the Lake Michigan shoreline can be inspirational, and it is their offspring that repopulate the North Country with the spring. 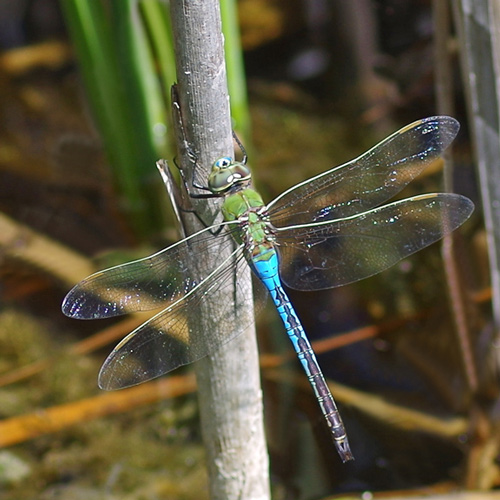 In addition to its spring migrants, Wisconsin has non-migratory, resident population of Common Green Darners that emerge at about the time that the migrants have finished breeding and are completing their life cycles.  Natives replace migrants in our skies, and their naiads overwinter in frigid water under the ice.

Common Green Darners are big insects, with bodies exceeding three inches and wingspans of four-plus inches.  Both sexes have a green thorax, but the male’s abdomen is blue and the female’s is brownish.  They have wrap-around compound eyes and a characteristic bulls-eye-like spot in front of their eyes.

The warming of the water in spring is a powerful and irrevocable trigger.  Water changes temperature slowly – a lot of energy is needed to move it just a few degrees in either direction.  The next dragonflies on the scene signal that the water has warmed. Their naiads crawl out of the water and out of their nymphal skins, pump up their wings and become creatures of the air, chasing their prey – flashes of wings that the dragonflies spot from perches or while in flight.

COMMON BASKETTAILS (Epitheca cynosura) are drab dragonflies in the Emerald Family (Corduliidae).  They sport a black spot at the base of each hind wing, muted orange bars on a black abdomen, and short, gray hairs on their thorax.  As Cynthia Berger explains in her book Dragonflies, “like real fur, the fuzz helps hold in the heat generated by those muscle contraction [contractions of the flight muscles, which raise the temperature within the thorax].  Like darners, they perch vertically rather than horizontally, often hanging down from a twig tip.  Baskettails are agile flyers that may be seen in the afternoon hunting in groups above swarms of smaller insects like midges.

“Baskettail” refers to the “basket” of eggs a female will carry under her abdomen.  According to bugguide.net, the genus name Epitheca is derived from epi (above) and theca (pouch or basket); a female carts her eggs around, sometimes all day, abdomen elevated, looking for the right spot to deposit them.  She may attach her ball of eggs to a submerged plant and then depart, or she may drag/tap her abdomen along the water’s surface, unraveling her string of eggs as she goes.  In either case, the once-compact egg mass swells into a strand an inch wide and six inches to several feet long (just add water). 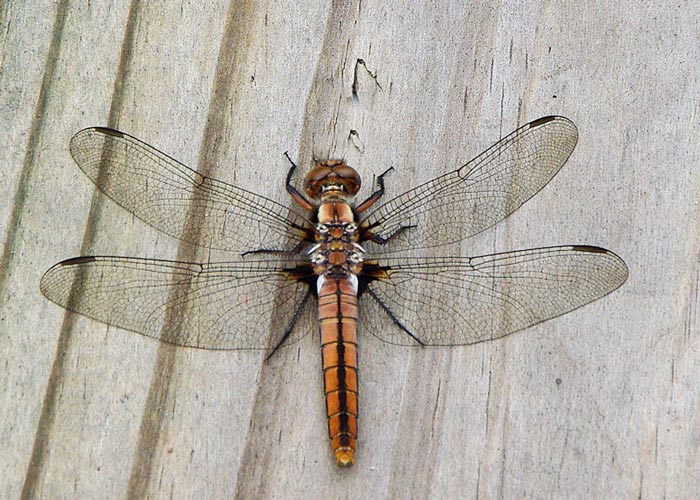 CHALK-FRONTED CORPORALS (Ladonia julia), in the Skimmer family Libellulidae, are northern dragonflies that often emerge in early May.  Adult males have white “corporal’s stripes” on the first segment of their thorax and white on the first few abdominal segments.  It’s called pruinosity, and it’s caused by an opaque, generally white/blueish-white, waxy substance that develops on the cuticle that covers the dragonfly’s exoskeleton (usually the abdomen, but sometimes other body parts) and gives it a powdered or hoary appearance.  Pruinosity is not only a sign of aging, it’s an indicator of breeding readiness.  Female Corporals are rusty brown with traces of white markings at the thorax and abdomen, and juveniles are a pinkish-brown with thin “shoulder” stripes and a black line down the center of the abdomen. 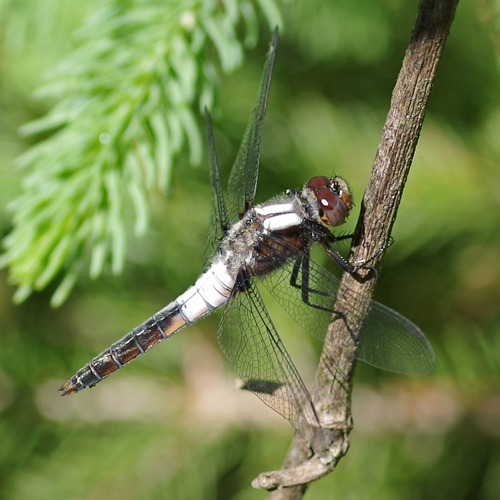 Adult Corporals grab flying insects from royal ant/mosquito-size through small dragonfly-size.  They often perch on, bask on, and even hunt from the ground or a rock, and on cool days, hundreds may congregate on warm road surfaces.  They are known to follow people and pick off circling mosquitoes and deer flies.  Much has been written in these pages about the benefits of aposematic (warning) coloration and about the up-side of a prey species mimicking an aposematically-colored insect, but the Corporal appears to have read none of it.  In studies of food preferences, Chalk-fronted Corporals chose their prey by size – small prey over large – but they didn’t seem to care if it was wasp-colored or not.

Darners and Baskettails and Corporals – Oh My!

And then there are Whitefaces. 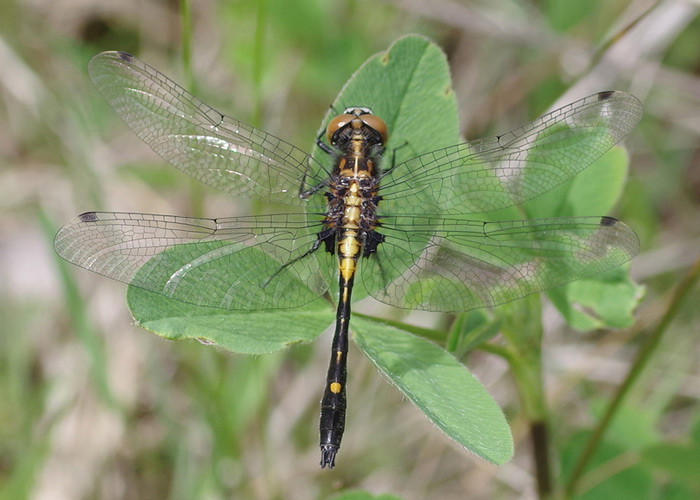 It would be hard to conjure up a more logical name for the DOT-TAILED WHITEFACE (Leucorrhinia intacta, family Libellulidae).  Both males and females have the “dot-tail” and the “white face,” though females tend to have a few yellow splotches along the top of the abdomen, and juveniles have, temporarily, even more.  Like some of the other early dragonflies, whitefaces have a pretty hairy thorax. 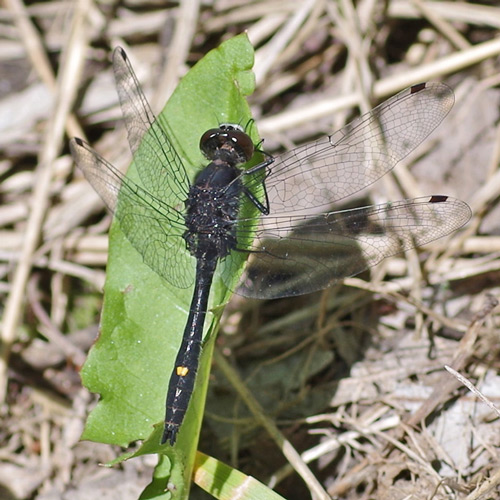 Dot-tailed whitefaces enjoy most kinds of quiet waters – bogs, marshes, swamps, sloughs, farm ponds, and even very slow streams – as long as there are low aquatic plants to perch on.  They bask on floating water lily leaves and on the ground, and they don’t gain much altitude when they fly.  The BugLady frequently sees them in her grassy field, some distance from water.  They emerge by late spring and fly through a good chunk of the summer into early fall.

The DUSKY CLUBTAIL (Phanogomphus spicatus) is an early clubtail; look for it from late spring through mid-summer in Wisconsin.  The description of Dusky Clubtail behavior in Mead’s lovely Dragonflies of the North Woods fits perfectly, “When not actively engaged in oviposition, Duskies are likely found far from water, perched in the sunshine on gravel roads, trails or rocks.” 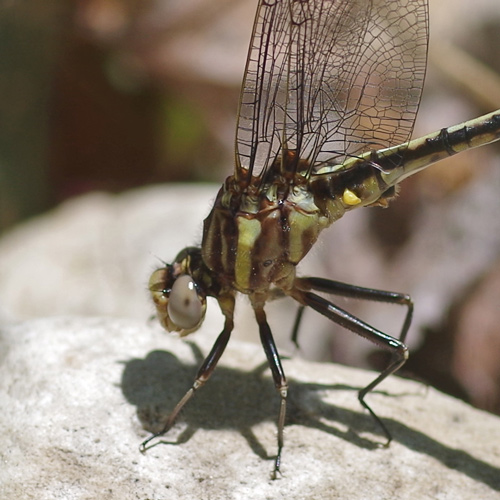 Many CLUBTAIL species (family Gomphidae) (but not all) are adorned with three noticeably-flared segments at the end of their abdomen that give them their name (a few non-Gomphids sport clubs, too).  The “club-less” clubtails are medium-sized, about 2 to 2 ½ inches long, with unspotted wings and striped bodies, and (usually) green, blue or gray eyes, and they have a short flight period during the first half of the dragonfly season.  They generally rest, hunt and fly close to the ground.  The stocky, young Gomphid naiads tend to burrow shallowly into the substrate, lurking with only their eyes exposed (to spot prey) and the tip of their abdomen (for breathing). Naiads may only crawl part way out of the water before they emerge.

And then there are Common Whitetails… 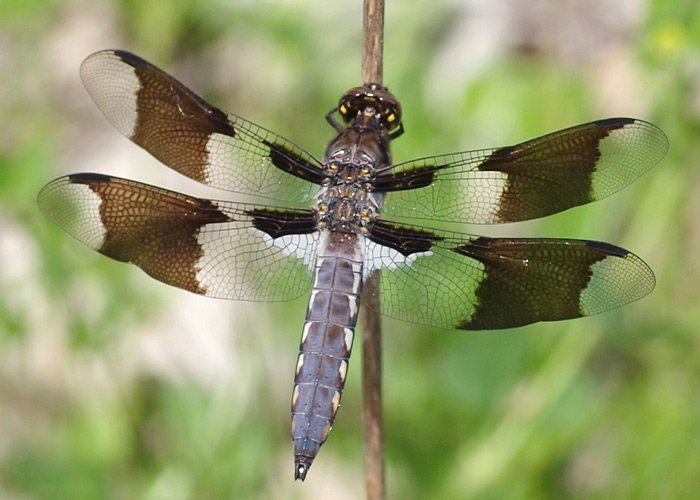 Darners and Baskettails and Corporals and Whitefaces and Clubtails (and Whitetails) – OH MY!