To paraphrase the old TV show, there are 8 million stories on the Naked Prairie. Some stories unfold quietly, and others involve mayhem (the big, shiny, globe-shaped tachinid flies that own the prairie’s flower tops these days are up to no good). These three small (less than a half-inch) decidedly non-flashy bugs (all in the Order Hemiptera) enjoy their anonymity—so much so that it’s hard to find them or detailed information about them. Yet they contribute to the operation of the prairie.

Some Scolops are called Partridge bugs. In spite of the fact that almost three dozen Scolops species occupy prairies and grasslands over a huge chunk of North America, very little is known about their everyday wheelings and dealings. The BugLady thinks this is Scolops pungens—unless it’s S. sulcipes. They overwinter as adults. 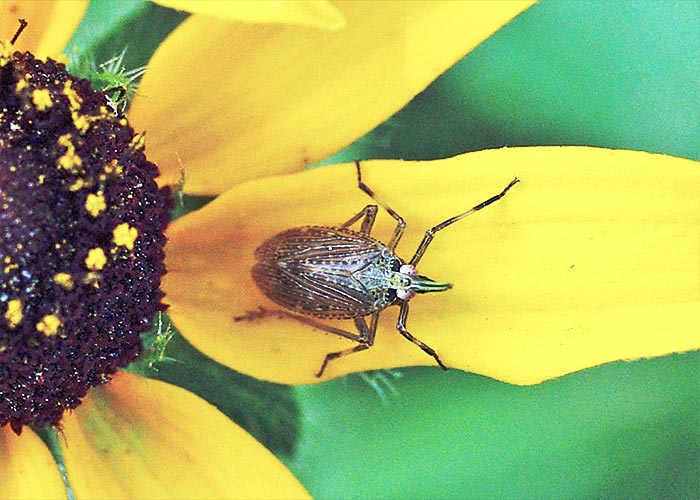 Scolops (not, as the BugLady’s search engine keeps trying to suggest to her—Scallops) are in the family Dictyopharidae (the Dictyopharid Planthoppers). These are a slow-moving bunch of plant-eaters that rarely reach “pest” status. Family members are famous for their ability, as nymphs and adult females, to make and deploy wax from glands and pores. They can crank out different shapes of wax plates from different “wax factories” in their bodies. The water-repellent wax camouflages its wearer, shields it from parasites and predators, and protects the eggs. Scolops’ nymphs are outstanding. 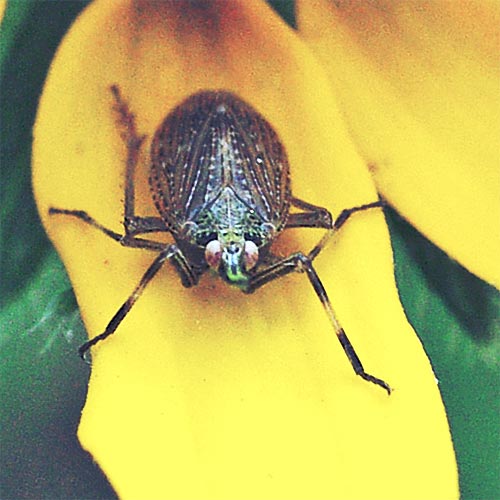 Harmostes (no common name) is a small plant feeder in the true bug family Rhopalidae, the scentless plant bugs. While most True Bugs come armed with scent glands, the Rhopalidae lack this defense system. Harmostes ’ most famous scentless relative, the Box Elder bug, may make up for its scent-less-ness by mimicking the definitely-toxic milkweed bug. There are seven species of Harmostes in North America, and the BugLady thinks this is Harmostes reflexulus, one of the two species in the genus that occurs commonly in the Eastern U.S. 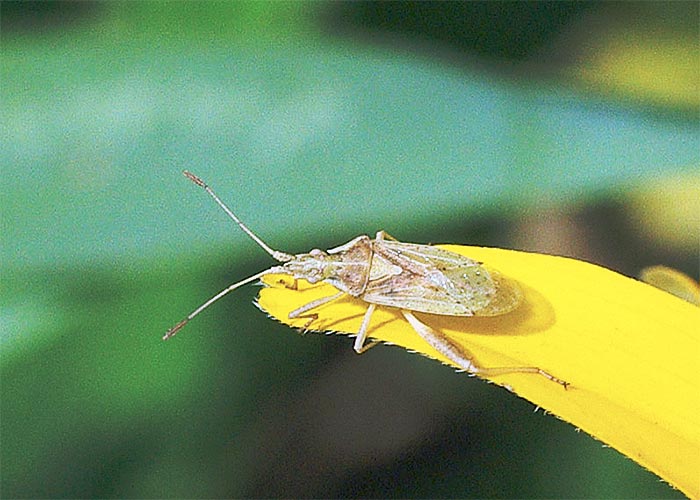 Look (hard) for Harmostes in fields filled with their food plants—grasses and wildflowers, especially members of the Aster family. They are infrequent nectar feeders.

Harmostes’ claim to fame, according to the 1901 University of Pennsylvania publication Contributions from the Zoological Laboratory, is that they carry around an uneven number of chromosomes. If the name Harmostes has a vaguely Greek ring to it, it’s because Harmost was, according to Wikipedia, an ancient Spartan word for a tyrannical military governor put in charge of a conquered town.

There are about a dozen species of the aptly-named Stilt Bug in North America. Stilt bugs are, appropriately, in the stilt bug family Berytidae (formerly called Neididae). There are other spindly-legged bugs out there, but stilt bugs’ antennae have enlarged segments at both ends, and the similar-looking assassin bugs have front legs built for grasping. The BugLady thinks this stilt bug may be in the genus Jalysus (which narrows the field to two, but a microscope is required to narrow it farther. 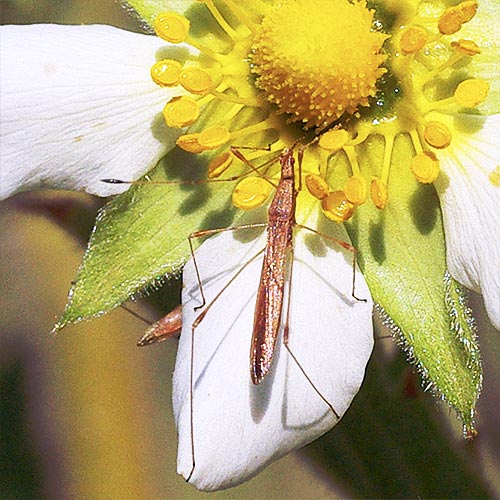 Stilt bugs are found in brushy grasslands. Most stilt bugs are plant eaters, and some are specialists—not just any plant will do. They apparently like plants with sticky hairs. About 40 years ago, scientists began to realize that some species of stilt bugs are, at least, omnivores (they do better when they supplement their veggies with a little meat), and that some may feed mainly on insects and insect eggs. As such, they have joined the arsenal of biological controls on plant pests like aphids, leafhoppers and thrips. A few stilt bug species are, themselves, considered crop pests. They overwinter as adults in sheltered places.

Another bug with classical aspirations, the origins of Jalysus’ name are a bit confusing. Jalysus, built by Jalysus, was a city in ancient Rhodes (recall the Colossus of Rhodes from your Mythology class?). Some sources list Jalysus as a huntsman and son (or grandson) of Apollo and the founder of Rhodes. Others say Jalysus was a daughter of Danaus, who had 50 daughters, the Dadaides (or so says A New System Or an Analysis of Ancient Mythology, 1774). Danaus’s name was, in turn, borrowed to be the genus name for Monarch butterfly. The BugLady loves it when small bugs get names that come with big baggage. See an egg and a newly-hatched stilt bug.

There are eight million stories in the Naked City. These have been three of them . If you want to hear more of the prairie’s tales, Riveredge Nature Center, Newburg, WI is hosting Knee Deep in Prairies on August 8. Find information and registration at http://riveredge.us/