The world is full of well-nigh inscrutable moths, but this trio—the Yellow-collared Scape moth, the Eyed Paectes, and the Pink-barred Lithacodia—stand out in a crowd. They are distinctive moths, from different moth families, that have one thing in common—their taxonomy is shifting.

There is general agreement that the Yellow-collared Scape moth (Cisseps fulvicollis) is slightly misnamed. The “scape” part is actually OK—entomologically speaking, the first joint of this critter’s antennae is called a scape (Merriam Webster says a scape is a midrib). It’s the yellow part that’s iffy, but for the record, in some parts of its range there are more individuals with yellow collars. YCSMs are found in much of the U.S., but it’s too cold here in God’s Country (most years) for their overwintering caterpillars to survive. So, YCSMs must re-colonize the northern reaches of their range each year (a waste of genetic material, since their offspring will freeze, but they provide eye-candy for us). Nature is careful of the species but careless of the individual. 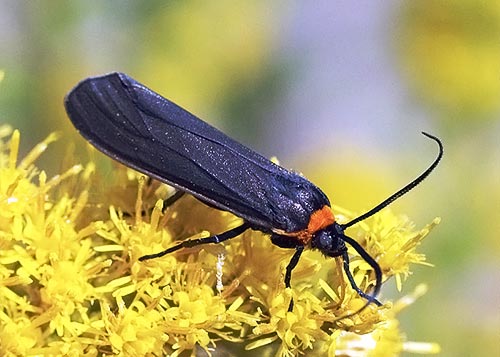 YCSMs are on the tiger moth side of the family Acrtiidae (a few sources place them in the family Erebidae, which is made up of a conglomeration of moths that were moved there from the families Noctuidae, Arctiidae and Lymantriidae, and the dust hasn’t settled on that makeover yet). They are moderate-sized moths with wingspreads of just under 1½” and they are easily confused with the slightly larger Virginia Ctenucha moth, whose flight period they overlap (VCMs fly a bit earlier, but YCSMs fly longer—until the first hard frost) and whose grassland habitat and day-flying habits they share (both also come to lights at night). YCSM wings have a translucent area on the hind wing that is not visible when they are at rest because they typically fold the front wings over the hind. 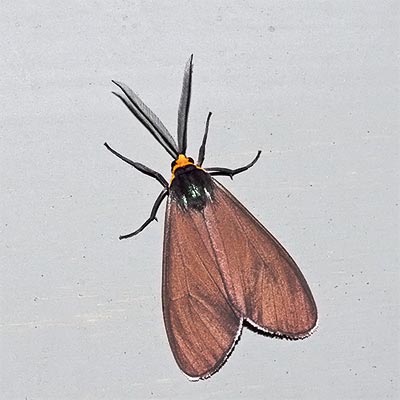 Adults are most often seen in summer and fall, nectaring on milkweed and on composites, especially goldenrod. It is hypothesized that since both the VCM and the YCSM wear Nature’s warning colors of orange and black, they are mimics, but what they are mimicking is not agreed on—either a painful wasp or a bad-tasting beetle or, like the Monarch-Viceroy situation, a wholesome moth is mimicking one that isn’t. Sogaard, in Moths and Caterpillars of the North Woods, says that YCSMs ingest pyrrolizidine alkaloids (produced by plants to discourage grazers) while nectaring on Eupatoriums like Joe-Pye Weed, and that native birds turn up their beaks at dead YCSMs that are offered to them. One blogger reports that the toxins they ingest are transferred to their eggs. The host plants of their bristly caterpillars include spike rushes (genus Eleocharis), grasses, and lichens.

When the BugLady saw a picture of the very spiffy Eyed Paectes in Sogaard’s book, she thought it would be neat to meet one in person. Then she went through her “X-files” (pictures of unidentified insects) and discovered that she already had met one, albeit a somewhat worn specimen. (See pictures of an EP in all its glory.) The EP (Paectes oculatrix) is in the family Euteliidae (in the past, the moths in this family seem to have been placed in either the family Noctuidae or Erebidae). Along with other family members, it flattens its wings and raises its stubby abdomen into the air so that it that looks like a lopped-off twig. Ogle them on their BugGuide page. With a one-inch wingspan, the EP is a shade smaller than the YCSM. 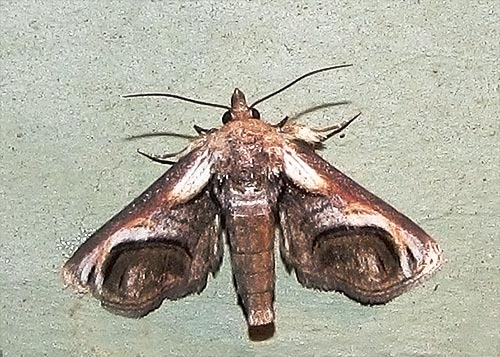 Adult EPs may be found in summer, in Eastern North America. The BugLady couldn’t discover what, if anything, the adults feed on, but the caterpillars are one of several kinds of larvae that feed on poison ivy leaves without any side effects (they do their eating from underneath the leaves). Birds are decidedly unenthusiastic about eating the adults.

Older books list our third moth, a member of the owlet moth family Noctuidae, as the Pink-barred Lithacodia (AKA the Pink-barred Glyph—a “glyph” is a vertical groove, a written character, or a symbol). The PBL’s genus name—it’s the only New World representative of its genus—has been changed and newer references call it the Pink-barred Pseudeustrotia (Lithacodia/Pseudeustrotia careola), but the BugLady isn’t sure this is an improvement. 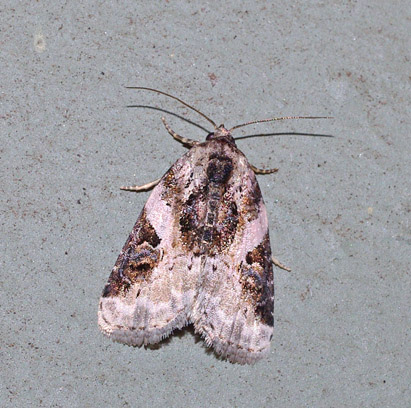 There’s a bunch of not-necessarily-related moths called “bird-dropping moths” because of the substance they’ve chosen to mimic in order to be camouflaged. The PBL/P’s disguise is rather basic; the BugLady’s favorite in this category is the beautiful Wood Nymph of previous BOTW fame. 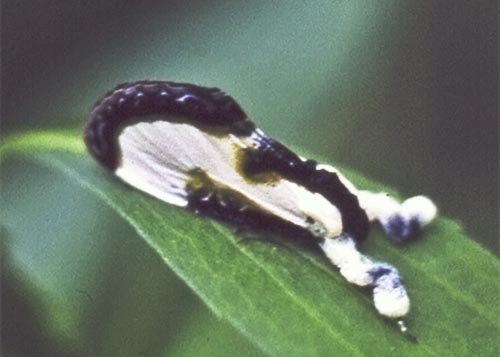 The PBL/P is another species of the grasslands and woody edges east of the Rockies, and it flies at night throughout the summer. Its wingspread is about an inch. Its caterpillars feed on dock, smartweed and goldenrod.