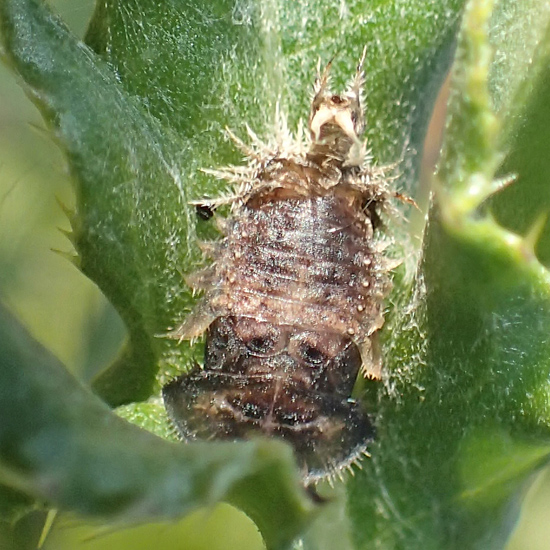 Thistle tortoise beetles are in the huge Leaf beetle family, Chrysomelidae (possibly 60,000 species worldwide), and in the Tortoise beetle subfamily Cassidinae (about 3000 species). They owe their tortoise-like appearance to flared edges of the head, thorax, and elytra (although unlike a tortoise, the front and rear ends of the “shell” aren’t fused). The beetle’s shape allows it to squat right on the leaf’s surface, which protects its underpinnings from ants, and because it melds seamlessly with the leaf, it’s less likely to cast a shadow for predators to see.

Some tortoise beetles are brilliantly-colored https://en.wikipedia.org/wiki/Imperial_tortoise_beetle#/media/File:Imperial_tortoise_beetle.jpg and https://commons.wikimedia.org/wiki/File:Desmonota.variolosa.jpg – so striking that, according to Brittanica.com, a few are used to make jewelry. Our native Golden tortoise beetle can change colors – not through a trick of physics, like the Dogbane leaf beetle of previous BOTW fame, but intentionally (“emotionally”): https://blogs.scientificamerican.com/running-ponies/glad-you-ditched-the-anal-fork-golden-tortoise-beetle/.

Chrysomelids are vegetarians – some specializing on just a few plant species, and some considered agricultural pests. 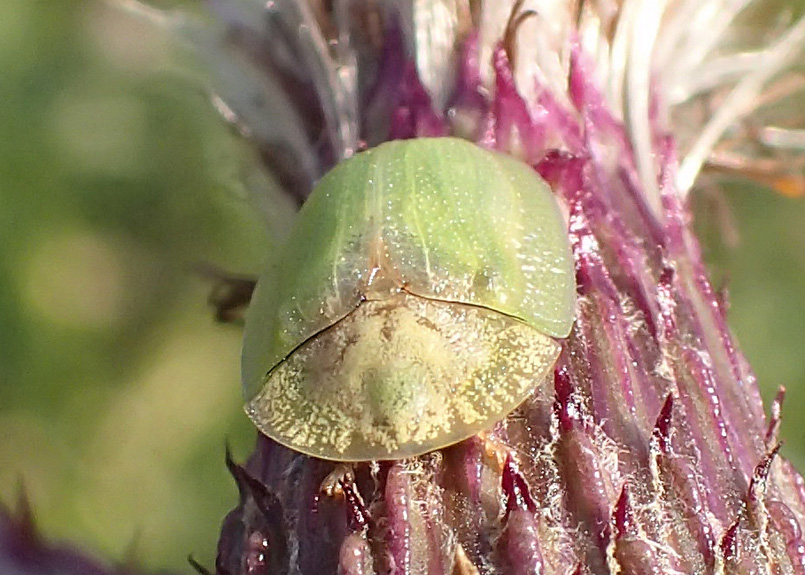 The aptly-named THISTLE TORTOISE BEETLE (Cassida rubiginosa) is also called the Green thistle beetle and the Thistle-defoliating beetle. And the Bloody-nosed beetle – according to bugguide.net, the Latin rubiginosus means “rusty/rust-colored” and “refers to the beetle’s ability to secrete a reddish liquid from its head” (a phrase that was repeated verbatim in lots of sources but elaborated on by none of them. A defensive cocktail?). The spines that poke out from around the larval body are called “scoli” and are sensory organs – like the bumpers on a bumper car, they tell the larva when something brushes against it (which makes the larva hunker down on the leaf surface).

Thistle tortoise beetles are not native to these parts. In the Old Country, they are found throughout the Continent and across northern Russia. They were first observed in Quebec in 1901, and they spread out from there and are now ensconced in grasslands, Ag lands, and disturbed/neglected open areas across the northern part of North America (and they were intentionally introduced to Virginia). 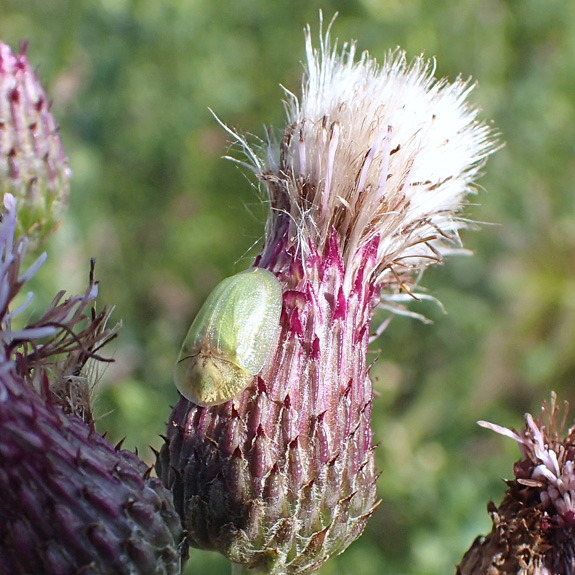 With a few (major) exceptions, their story is similar to that of many other leaf beetles. A female deposits her eggs, about three at a time. In this case, they are placed on the undersides of leaves in small packets called oöthecae. She takes her time, ovipositing in fits and starts with sizeable time-outs in between, for a total of up to 1,000 eggs. Before she walks away from each egg packet, she covers it with a “secretion” and smears feces over it, which discourages predators and increases the eggs’ chances of hatching.

There is one generation a year, but because the adults overwinter in soil or leaf litter and emerge in spring, and because a female may lay eggs for three months or more, and because the larvae pupate and emerge as adults the same summer and keep on eating until it’s time to tuck in for the winter (they eat knapweed and burdock, too), you can find adults and larvae abroad for much of the growing season. Adult feeding is superficial but the leaf-skeletonizing larvae really dig in; the “window pane” appearance of the leaf is characteristic. 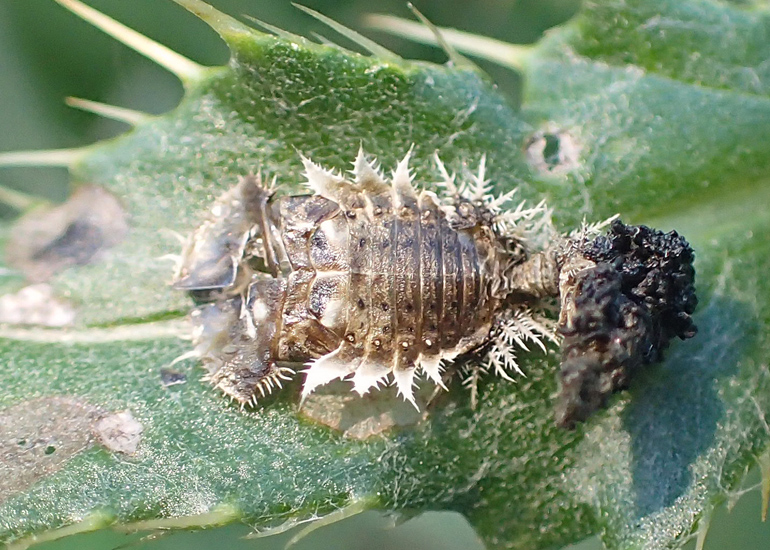 Here’s a pupal case – https://bugguide.net/node/view/960322/bgimage – a number of the pupal cases that the BugLady photographed were broken open at the front, where the adult had emerged.

Canada thistles aren’t from these parts, either, but they’ve lived here since the 1600’s. Like the beetle, Canada thistle is native to northern Asia and Europe (it’s called Creeping thistle in England), so in this case, both the pest plant and one of its grazers have accidentally made it to our shores. Thistle tortoise beetles are crazy about Canada thistles and have been introduced as a biological control in New Zealand, a country that is extremely cautious about opening its borders to exotic plants and animals (in New Zealand they call it California thistle). 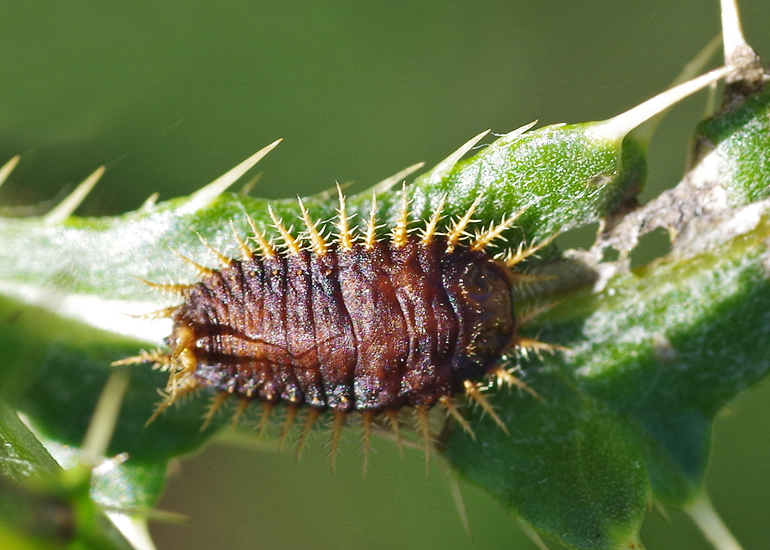 Can you order up a bushel of them to take care of your Canada thistles? You cannot. Says the Integrated Weed Control Project at Washington State University, “This insect is known to attack native thistles, is not an approved agent, and is NOT distributed by IWCP.” For a couple of “shout-outs” for native thistles, see https://xerces.org/wp-content/uploads/2016/10/2016-029_Native-Thistle-Conservation-Guidelines_FINAL_web.pdf and https://weedwise.conservationdistrict.org/2017/thistle-identification.html. 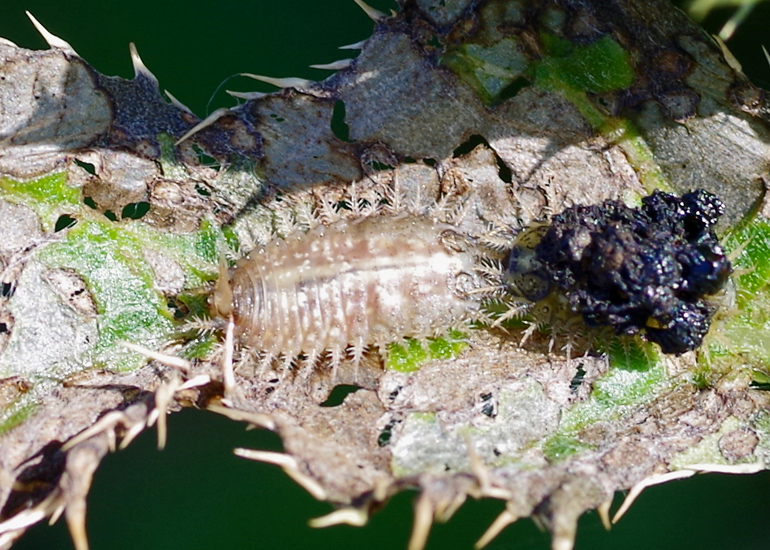 Apparently, the larva never throws anything away. Instead of dropping off each time the larva molts, the old skin is stored on twin forks protruding from its aft section. And each time it poops, the frass (bug poop) is also conserved on those caudal/anal forks. So – skin-frass-frass-frass, skin-frass-frass-frass – repeat as necessary – the compressed and portable scrapbook of its life https://bugguide.net/node/view/1238110/bgimage and https://bugguide.net/node/view/249152/bgimage.

Why? The “stercoraceous parasol” (1869), “faeces pack” (1915), “frass mask” (1935) or “fecal shield” (today) has long intrigued naturalists. An early theory about it being a tiny umbrella has been rejected. It effectively disguises its bearer as an inanimate blob of bug droppings, and many predators avoid droppings because they are unsanitary health risks. Add to that the fact that some species of tortoise beetles eat plants that are chemically defended, and so are toxic. And, add to that the fact that the larvae can wave the mass of stuff around in a threatening manner, as several did while the BugLady was photographing them. It’s not foolproof – spiders and some insects like stinkbugs and damsel bugs can pierce it.

Interesting Tortoise Beetle Fact #2: And it’s a lot to digest!

Humans can’t digest cellulose, the main structural ingredient of a plant cell wall, because we lack the necessary enzymes to do so (and so it travels through our systems as roughage). Some herbivores produce the necessary enzymes, and others outsource the job to micro-organisms like bacteria. The Thistle tortoise beetle has developed quite a complex process.

It has the enzymes needed to digest cellulose but lacks the ability to break down another important component of a plant cell wall – pectin. But – it hosts free-living bacteria that are found in special sacs in the beetle’s gut, bacteria that provide enzymes that the beetle uses to break down pectin. With the help of the bacteria, the beetles can access the nutrients in plant cells; within the shelter of the beetle, the bacteria can afford to simplify and streamline its genome. Win-Win. https://www.sciencedaily.com/releases/2017/11/171116132757.htm. Mom passes the bacteria along by applying a coating to the cap of each egg shell, which the larvae eat after hatching.

Hmmm – how to explain this delicately so that the corporate filters don’t block this episode. OK – the female’s reproductive system is a long and winding road, and the male has adapted quite adequately. So well, in fact, that your next catheter may be modeled on the organs of the Thistle tortoise beetle. The popular press was all over it.