Another week, another alien beetle eating an alien thistle. The BugLady found this pair of weevils while she was chasing Thistle tortoise beetles (clearly, it’s a weevil that gets a lot of mileage out of its food plant). And, in the “Ain’t the Internet Grand” category, a Google search for “weevil on thistle” resulted in a quick ID.

It’s a small weevil with some big names – the Thistle Head Weevil and the Nodding Thistle Receptacle Beetle (NTRB) (Wikipedia defines “receptacle” as “the thickened part of a stem (pedicel) from which the flower organs grow”). Like the Thistle tortoise beetle, of very recent BOTW fame, the Nodding Thistle Receptacle Beetle (Rhinocyllus conicus) is not originally from these parts; it hails from Eurasia and North Africa. It was introduced to control the alien and invasive Nodding/Musk/Russian thistle (Carduus nutans) and a few of its relatives, and now it’s at home in pastures and grasslands and road edges over much of North America. 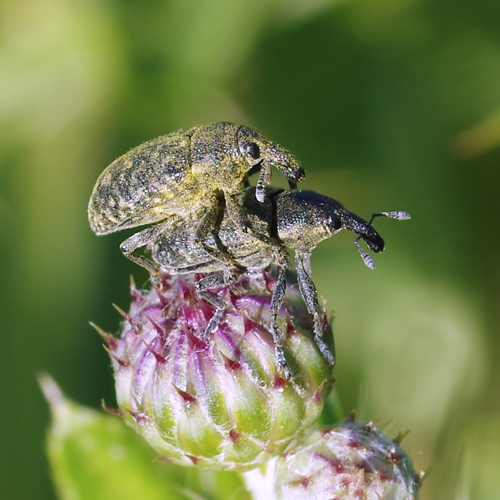 NTRBs are about a quarter of an inch long and have a fairly short snout. They are dark/black in color, but freshly-emerged individuals are mottled with a coat of short black and yellowish hairs that makes them look like they’re dusted with pollen. The hairs wear off over time, leaving the beetle bald.

In early summer, beetles congregate, and boy meets girl. Females lay between 100 and 200 eggs, two to five at a time, on the bracts of the developing thistle flower buds, and then top each egg with frass (bug poop) (alternatively, some sources say she caps the eggs with chewed-up plant material). The cap dries and protects the eggs from predators, and one source said that the cap attracts ants, which care for the eggs. Newly-hatched larvae dive into the flower head where, according to Wikipedia, they feed inside the receptacle on flower parts and developing seeds – one larva may consume as many as 25 seeds. The plant reacts like a gall, growing tasty tissue around them, which the larvae also eat. Despite their secretive lifestyle, the larvae are found by parasitoids.

As they feed, frass that collects inside the flower head is mixed with masticated plant material to form a stiff chamber that becomes the pupal case. Flower heads contain multiple larvae, and the combined pupal chambers may form a large, hard mass. After pupation, the newly-minted adult lingers in its protective case for a while before exiting the flower. Adults may chew on the leaves a little, but the larvae do the most damage. NTRBs overwinter as adults and emerge early in the following summer to lay eggs and then die. They are strong, diurnal flyers, but they are reclusive when they’re not feeding. 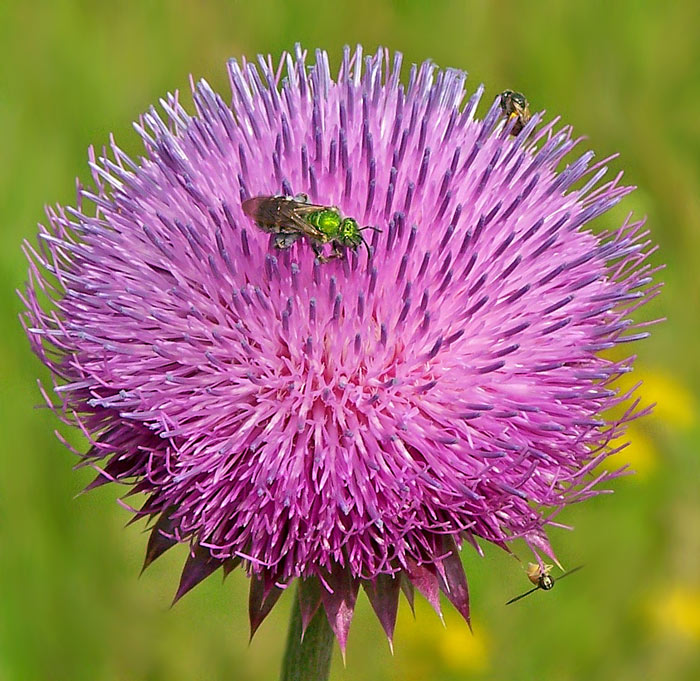 Biological control can be a “Be careful what you wish for” scenerio, and we are getting better at it, but the BugLady worries that at the base of any bio-control decision, there’s a value judgement about acceptable collateral damages. The main story about this weevil revolves around its use to control Russian thistle, Milk thistle (Silybum sp.) and some non-native members of the genus Cirsium. After an introduction to Canada was deemed successful in 1968, NTRBs were released in Virginia, California, Montana and Nebraska in 1969. On some sites, thistle populations decreased by 80% to 95% in just a few years, and over the next few decades, weevils were deployed in most of the Lower 48. They traveled to New Zealand in 1973, to Argentina in 1980, and to Australia in 1989.

It was assumed that the weevil would stick to its non-native targets, but by the mid-‘90’s, it was obvious that the NTRBs weren’t limiting themselves to exotic thistles. While they specialize on thistles in the genus Carduus, a lot depends on synchrony – lining up their reproductive schedule with the budding of the plants. At the edges of Russian thistle’s range, and when Russian thistle has finished blooming, the weevil showed a willingness to move to native thistles – in fact, it has been found in 22 of our 60-ish species of native Cirsium, some of them already rare. 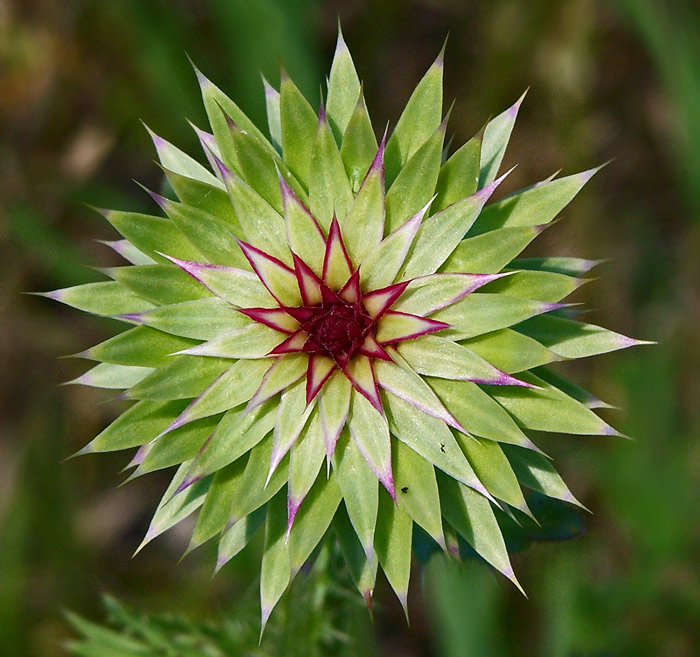 (Remember – native thistles support a large and complex community of animals, from cohabitants of the thistle bud, to Goldfinches and small mammals that use the fluff for nests, to butterflies and native bees that eat pollen and nectar from the flowers, to bee keepers who bottle thistle honey, to herbalists who harvest thistles for their medicinal value.)

Apparently, other continents don’t have susceptible native thistle species, so North America is the only place where the NTRB is behaving badly. It is now listed as invasive itself in several states and is barred from interstate shipment.

In a paper called “Rhinocyllus conicus – Insights to Improve Predictability and Minimize Risk of Biological Control of Weeds“ (1999), S. M. Louda discusses the history and reality of this “experiment” [the BugLady’s word] and makes recommendations about future introductions. He says:

Hindsight now demonstrates that, although the logic and reasoning were clear, the conclusion that Rhinocyllus was unlikely to have any major ecological effects was incorrect. The case suggests that more information was needed in order to make an accurate prediction.

There is enough evidence to suggest that this biological control agent should not be moved into the region surrounding the Great Lakes [Too late – there were several local releases in Wisconsin in the early 1980’s, and the weevil was documented on a native a Cirsium about 20 years later, 80 miles from a release site].

Perhaps most damning: “So, the weevil was released into Canada in 1968, and into the USA in 1969, after exploration and initial testing in Europe. And, research on its biology and interactions was done once it was brought into North America” [emphasis, the BugLady].

A review of information on the release of Rhinocyllus conicus to control of Carduus spp. thistles in North America suggests at least 8 lessons for future biological control efforts. (See https://www.invasive.org/publications/xsymposium/proceed/02pg187.pdf).

In the words of the Germans/Dutch/Pennsylvania Dutch/Scandinavians (lots of people claim this saying), “We grow too soon old and too late smart” (or, in the words of Benjamin Franklin – “Life’s tragedy is that we get old too soon and wise too late.”). Not a luxury we can afford, ecologically.

By the BugLady’s (admittedly quixotic) method of counting, this is (drumroll) Episode #500 in the series! What a journey! (Founding BugFans – you’re getting old!)