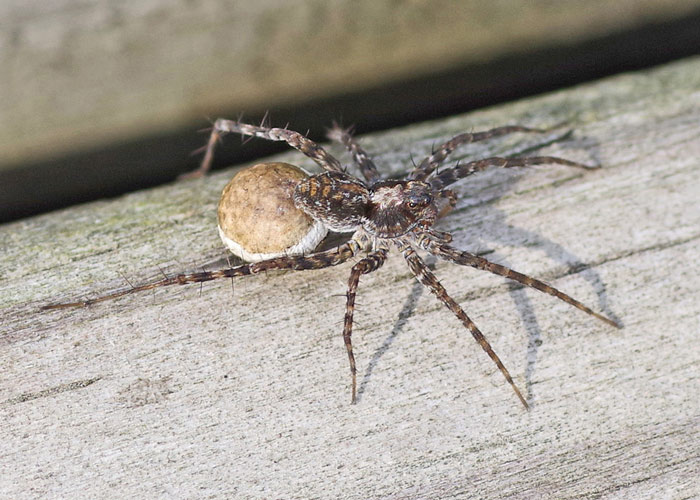 The BugLady likes spiders, and she can even hail a number of species by name when she meets them, but she’s never applied herself to their taxonomy, and she jokes that maybe she shouldn’t be identifying them all by herself (to which BugFan Mike graciously replied that maybe nobody should be).

Sources agree that she’s allowed to be confused by wolf spiders (family Lycosidae) vs nursery web spiders (family Pisauridae). Both can be mottled brown with long, striped legs, and neither spins a trap web. In his bugeric blogspot, Eric Eaton says that wolf spiders are most likely to be seen on the ground and nursery-web spiders on vertical surfaces, but the BugLady usually sees the spectacular Dolomedes fishing spider on boardwalks and dock railings. If you get up close and personal, you’ll see that the eyes in the two families are arranged differently (scroll down to the diagrams at here and here). Wolf spiders are famous for having tissue in their eyes that reflects light at night and here.

If she is lucky enough to see a female that’s carrying an egg sac, then she knows what she’s looking at! Nursery web spiders carry their egg sacs in front, with their jaws, and wolf spiders carry them to the rear, attached to the spinnerets, often raising their abdomen as they walk, to avoid damaging the sac. 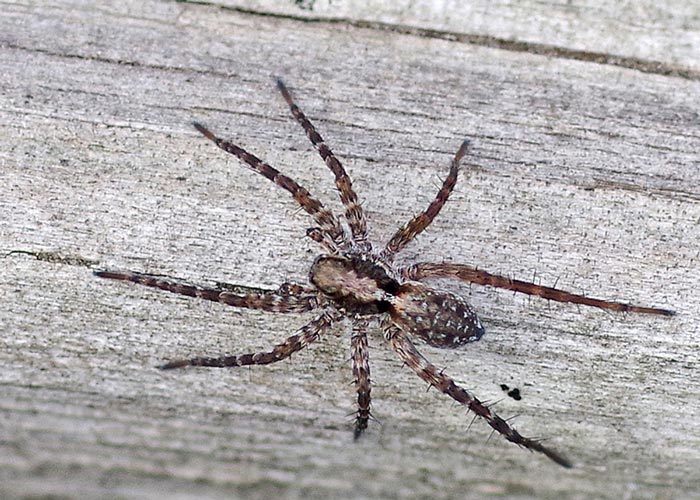 The BugLady was curious about how an egg sac is made and was thrilled to find this description in the University of Michigan’s excellent BioKids series: “After mating in May and June, female thin-legged wolf spiders begin constructing an egg sac. They first spin a circular disc of web from their spinnerets on the ground. They make it larger and lay their eggs in the center. They spin a covering disc on top of the eggs, connecting it with the bottom disc, to form a sac and use their mouthparts, called chelicerae, to detach the sac from its surroundings. Fresh threads are laid over it and females carry it under their abdomen by their spinnerets into the summer. The average number of eggs per sac is 48, though this number is highly affected by the size and health of the female parent.”  Click here to read more.

The story of egg sac transport has a different ending in each family, too. Nursery web spiders install their egg sac in a shelter that they spin in vegetation, and they hang around outside it to guard the eggs until they hatch and the spiderlings disperse. Wolf spiders lug the egg sac around until it hatches, whereupon the tiny spiders climb up onto Mom’s abdomen (stacked several layers deep, if she was prolific) and she carries them for a week or two longer (a Mother’s Day connection).

Anyway, the BugLady was enjoying the boardwalk at the ephemeral pond in late summer when a small, leggy spider emerged from between the boards with an egg sac on its rear, and on subsequent visits she photographed the species again. BugFan Mike confirmed her guess that they were Thin-legged wolf spiders (TLWS) in the genus Pardosa (thanks, Mike), but to ID them to species, you need to look at their “naughty-bits.” There are more than 100 Pardosa species from the Rio Grande through Canada (500 worldwide) and the genus contains a number of “species groups” – groups of very similar-looking (to us), closely-related, yet distinct (to each other) species. Eaton says that, “Pardosa has long spines that are almost perpendicular to the axis of the leg itself. The hind pair of legs is long, and it is often easier to see the spines on that rear pair.” They’re found around water and in fields, leaf litter, and woods, and some are habitat generalists, which is unusual in spiders. 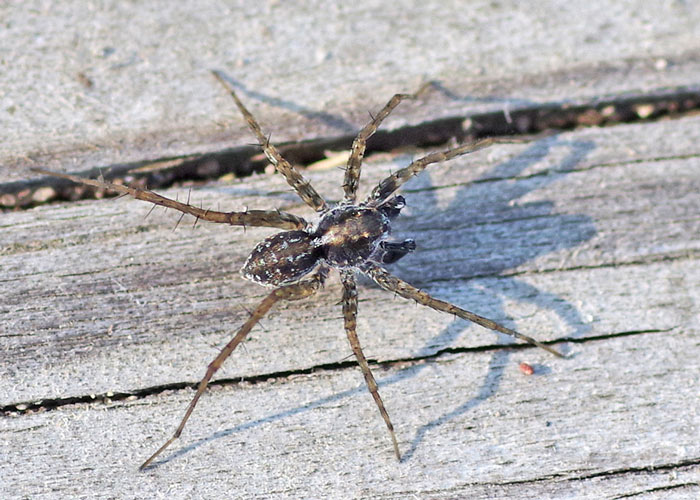 TLWSs have good eyesight that allows them to see movement, but they are “sit-and-wait” predators of small, ground-dwelling invertebrates rather than an active stalkers. Apparently they use vibrations as well as visual cues while hunting, and they also have sensory hairs on their legs that help them find prey and that detect chemicals and odors, including pheromones left by females.

Lorus and Marjory Millne, in the Audubon Society Field Guide to North American Insects and Spiders, tell us that Pardosa “hunts over a limited territory and often basks in the sun, keeping warm and ready for a quick pursuit of potential prey” (most wolf spiders are nocturnal).

Based on the biographies that she found of a few TLWS species (the BugLady is assuming that there is some similarity in lifestyle across the genus) courtship dances occur on sunny days (here’s a cool video of a Russian male TLWS approaching a female with love on his mind). Males will face off against each other and even fight over a female. 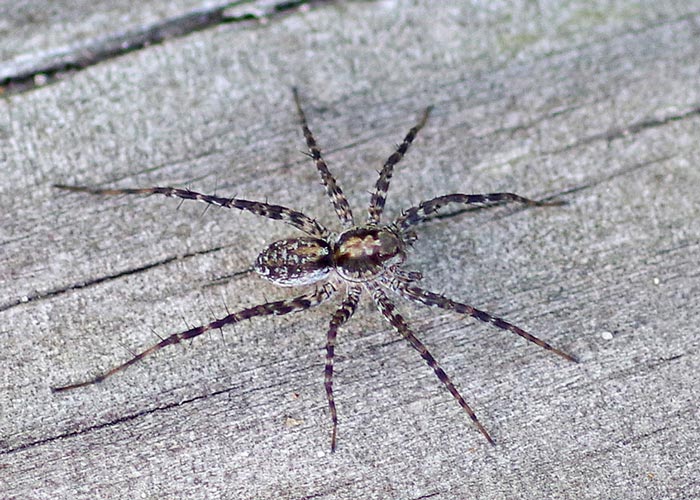 She produces eggs pretty quickly after mating – usually she makes only one egg sac, but she may eventually make another one. Her spiderlings will hatch and feed, and will overwinter half-grown, in suspended animation, restarting in the spring. If she makes a second egg sac, it will have fewer eggs, but each egg will include more food so that the second brood is not disadvantaged by its later start in life.

She carries the sac until the eggs are mature and then helps her young exit by tearing the sac open with her jaws. When they leave their perch on her abdomen, the tiny spiders often spread to new territories by ballooning (this episode was written in fall, but spider flight may take place any time).

People like to assign plusses or minuses to animals, and the BugLady often finds these assessments in the course of her research (as one of the BugLady’s English lit teachers once said, “Man is the measure of all things”). The BugLady tries not to “rate” bugs, but she might make an exception in the case of the murder hornet. Yes, TLWSs are beneficial because some of their prey consists of “pest” insects (so judge-y), but to a TLWS, a meal is a meal is a meal, so they also partake of “good” insects, too. As one author implied – they come so close to getting the Stamp of Approval. Get over it.