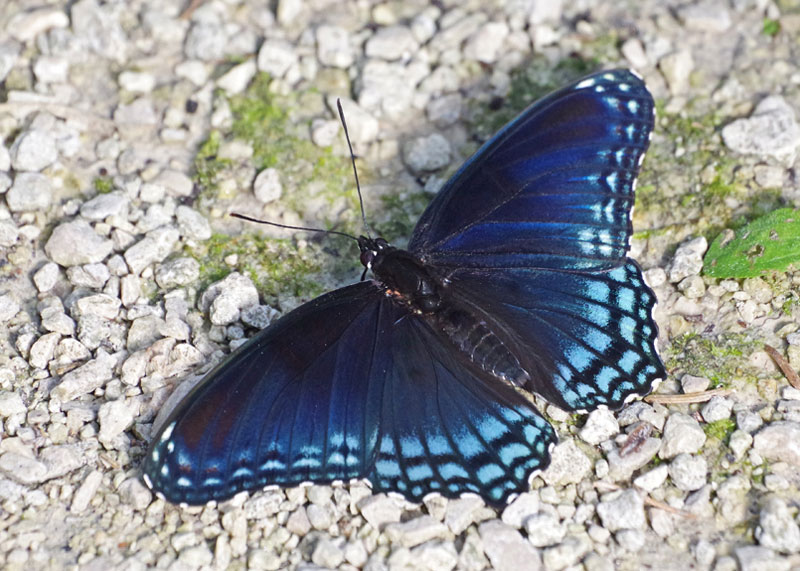 The BugLady can tell that the Christmas Season has rolled around because the Dr. Who marathon is about to start, and once again, Paul and Mary are showing us how easy it is to concoct showstopper desserts on the Great British Baking Show Master Class series (no calories in just looking). It’s time to turn on a seasonal CD, raise a glass, and celebrate the Twelve Bugs of Christmas – a baker’s dozen, actually – a selection that, as always, is either a little dragonfly-heavy or a little dragonfly-light, depending on who you ask. 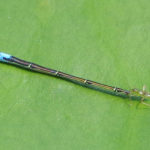 PREDATOR
Look closely. The long, skinny tube is the abdomen of an Eastern Forktail damselfly. At the right end of the tube is a small, green bug, a Water treader named Mesovelia, of former BOTW fame. Water treaders are carnivores, and Mesovelia preys on dead and injured insects and spiders. This one undoubtedly moved in after a larger predator was finished. 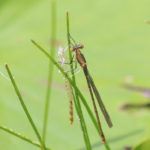 DAMSELFLY TENERAL
The BugLady loves finding newly-emerged damselfly tenerals like this Spreadwing, in the moments between water and air, stretching and gathering strength next to the skins they just vacated. 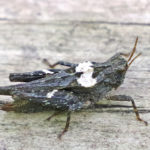 PYGMY GRASSHOPPER
Though she spends lots of time in wetlands, the BugLady rarely runs into these tiny (half-inch or less), dark grasshoppers (aka grouse locusts) that apparently failed to read the grasshopper handbook. They are good flyers, but when at rest, their folded second pair of wings is protected, not by their stubby forewings, but by an extended pronotum (back end of the thoracic shield) that may be as long as the abdomen. They are silent, and so also lack hearing organs. They are creatures of damp grasslands and wetland edges, where they eat mosses, lichens, algae, diatoms, and bits of organic material and spend the winter as adults. An alarmed pygmy grasshopper may take to the water and swim away (some species swim away underwater!), and some lay their eggs in the water. 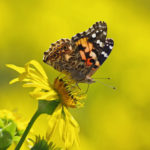 PAINTED LADY BUTTERFLY
The BugLady’s camera never met a yellow it didn’t love (for “love,” read “”magnify”). To the BugLady’s eye, a little yellow goes a long way, so she spends a fair amount of time editing the “extra” yellow out of pictures.  =Sometimes, though, in the golden days of late summer, she just has to embrace it. 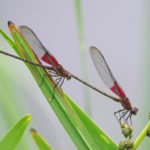 AMERICAN RUBYSPOT
And speaking of color, bright red is a bold color choice for any animal.  Unfortunately for the Rubyspots, while they are effective signals during courtship, the male’s brilliant wing spots not only reveal the damselfly’s whereabouts to its predators, but they also alert potential prey.  Bonus points if you know what plant they’re on. 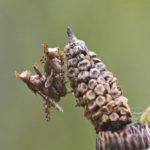 MARSH FLIES
The BugLady caught these flies out of the corner of her eye as she passed a stand of Equisetum/scouring rush at the Land Trust’s CESA site. Was it just dry vegetation hanging off the fertile cone of the Equisetum? Nope. It was a pair of Marsh flies in flagrante delicto. Nothing to see here, folks, just move along. 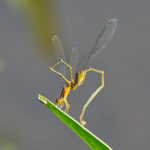 ORANGE BLUET
An oxymoronic name for these lovely damselflies. 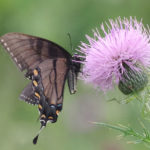 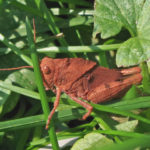 LOCUST NYMPH
The BugLady’s car drowned this summer. Seven inches of rain came down in the wee hours, and she woke up in time to see her neighbor’s trash bins floating down the road (when she could finally get to her car, she found that the stuff in the center console was wet). As she was prowling around taking pictures after the rain let up, she came across a small toad and this locust nymph, confirmation that the event had, indeed, been Biblical. 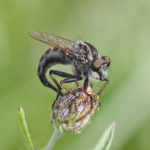 ROBBER FLY
This female is ovipositing in knapweed, but her offspring are by no means vegetarians. After the eggs hatch, the legless larvae will drop down and live in the soil for a year or longer, eating small insects, and the eggs and larvae of other invertebrates. Many robber flies lay their eggs directly into the soil. 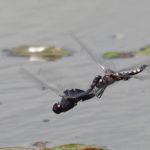 BLACK SADDLEBAGS
The BugLady takes a lot of “Hail Mary shots” of dragonflies, and most end up on the cutting room floor (she’ll hang onto this one until she does better). She came upon a pond at Riveredge on a sunny, summer day when several pairs of saddlebags were ovipositing. They fly in tandem over the surface (he’s in front); he releases her and she dips down, releases some eggs into the water, and then flies up to rejoin him and repeat the performance in another part of the pond. 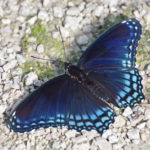 RED-SPOTTED PURPLES
These members of the brush-footed butterfly family, are another Pipevine Swallowtail mimic. They’re named for the spots on the underside of their wings, but the top side isn’t too shabby, either. Limenitis arthemis has two subspecies – in the southern part of its range, and here in southern Wisconsin we generally see the Red-spotted Purple (Limenitis arthemis astyanax).  Farther north, the White Admiral (Limenitis arthemis arthemis) replaces it. In the middle, of course, they hybridize, sometimes spectacularly. 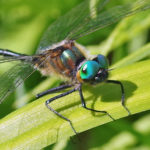 Whatever feast you celebrate, may it be happy and renewing and merry and bright.