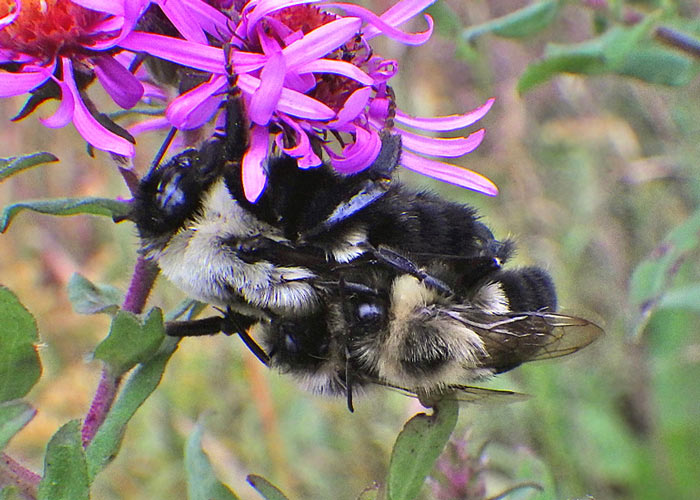 Let’s celebrate the (almost bugless) Season with a dozen bugs that were photographed this year. Down through the centuries, various regional versions of the classic Christmas carol have included hares a-running, ducks quacking, badgers baiting, bulls a-roaring, biting cows, bears a-beating, cocks a-crowing, asses racing, starlings, plovers, goldspinks (goldfinches), sides of meat, ponies, deer, stalks of corn, cheese, windmills, and an Arabian Baboon. Never any bugs, though, so it’s up to us.

The BugLady wondered (innocently) if this BUMBLE BEE TRIO was sharing body heat one afternoon in mid-October, but BugFan Thelma explained the facts of life. Even though the air was cool and their season was winding down, the two, smaller male bees still had hopes of a final tryst. We can all help track the range of bumble bees in Wisconsin by sending our bumble bee pictures, ID’d or not, by clicking here. 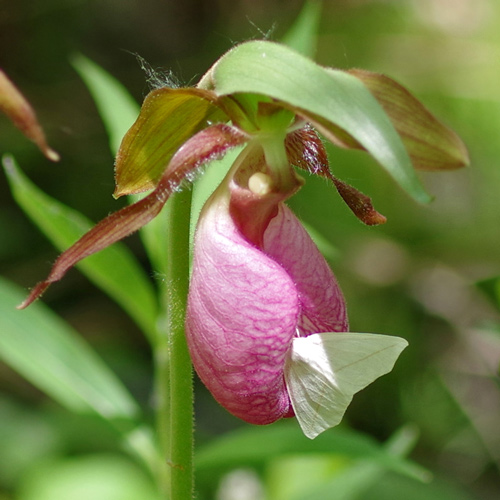 WHITE SLANT-LINE MOTH – Moccasin-flowers/Pink lady’s-slipper orchids are typically pollinated by native bumble bees that, lured to the flower by color and odor, push their way into a slit in the slipper, hoping (in vain) for a tasty reward. The moth may be biting off more than it can chew. 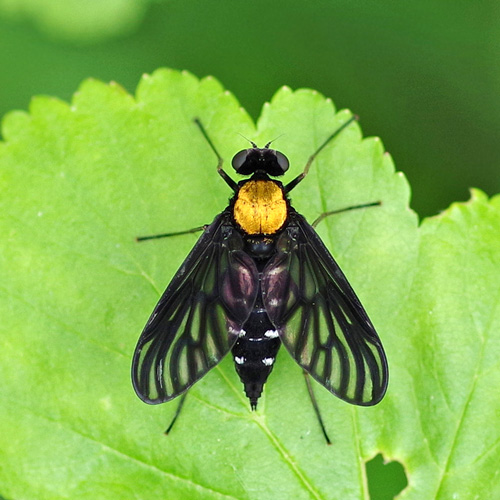 GOLD-BACKED SNIPE FLY – Is there a more elegant fly than this one? 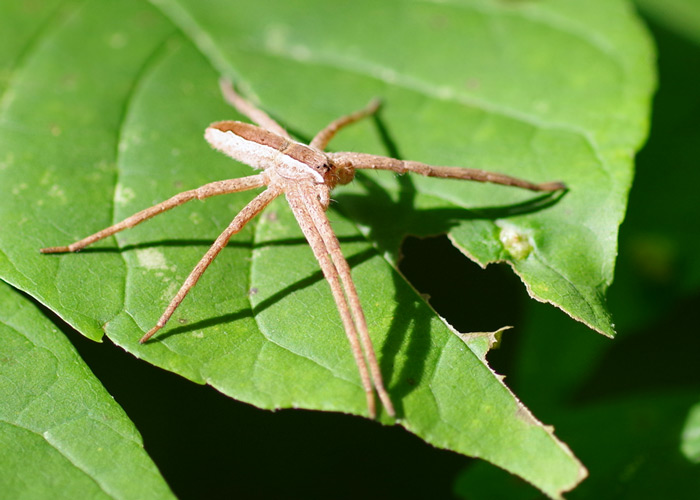 NURSERY WEB SPIDER on tiptoe. The Nursery web spider family (Pisauridae) includes the fishing spiders, but not all Pisaurids hang around the water’s edge (the BugLady once found a nursery web spider in her rhubarb). They don’t spin trap webs; they find prey as they move across the landscape. Their name comes from the shelters females make (and guard) for their egg cases. 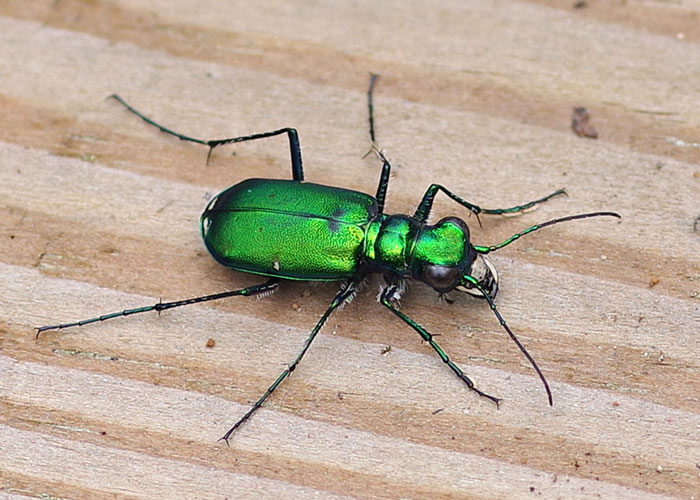 The BugLady stalks SIX-SPOTTED TIGER BEETLES – small, emerald sparks on dirt trails – as they stalk spiders and small insects. Some beetles don’t get the memo; there are two, four, six, and eight-spotted SSTBs. The Audubon Society Field Guide to North American Insects and Spiders says that they fly ahead on the trail and then turn to face us, but the BugLady has an awful lot of pictures of the rear ends of SSTBs. Read more about these great beetles by clicking here. 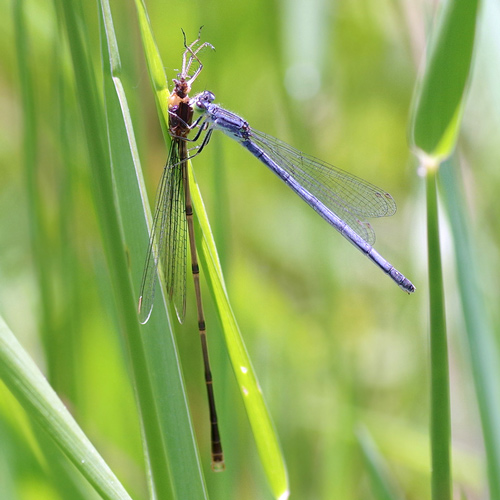 FORKTAIL AND LESTES – the first Spreadwing (Lestes) damselfly that the BugLady saw this spring was a Slender Spreadwing dangling in the clutches of a mature female Eastern Forktail (the slate-blue damsel on the right). Forktails are tough – a few days later, the BugLady photographed another forktail holding a Powdered Dancer, also larger than she was. 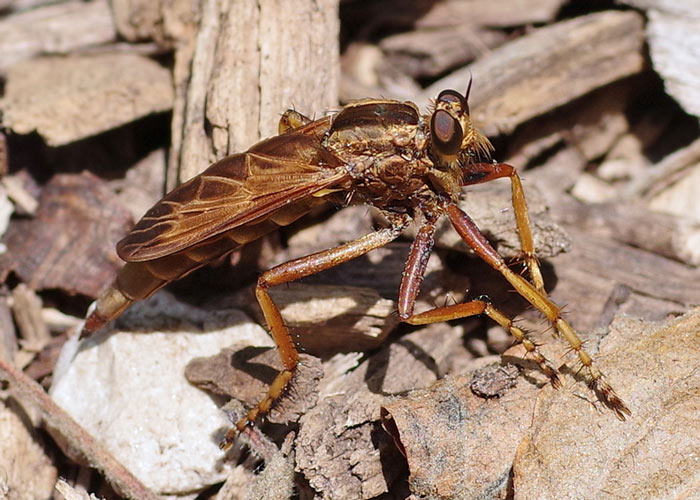 ROBBER FLY – Isn’t she spectacular!! A fly this spectacular should really have a common name, but she doesn’t (although one photographer calls her an Orange robber fly). She’s Asilus sericeus, an inch long robber fly that’s found in the eastern half of the country, often dining on butterflies and moths that have come in to nectar on flowers. The BugLady is always blown away by those long, angular legs. Starting soon – a three-year Citizen Science project designed to find out more about the distribution of robber fly species in Wisconsin. The BugLady will post more info later. 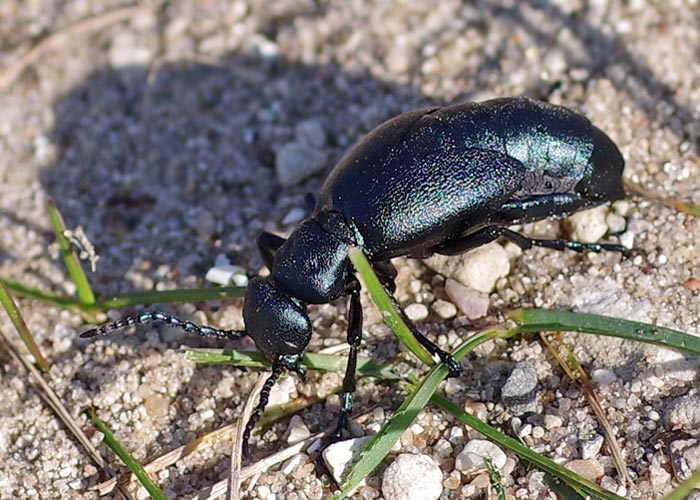 Every fall the BugLady gets questions about the large, flightless, slow-moving MELOE BEETLE, a.k.a. Oil beetle or Short-winged Blister Beetle. Look but don’t touch – they’re named “blister beetle” for a reason; click here to learn why. When they’re alarmed, Meloe beetles flop over and play dead, but they also ooze caustic stuff from their leg joints, so don’t touch the “dead” ones, either. 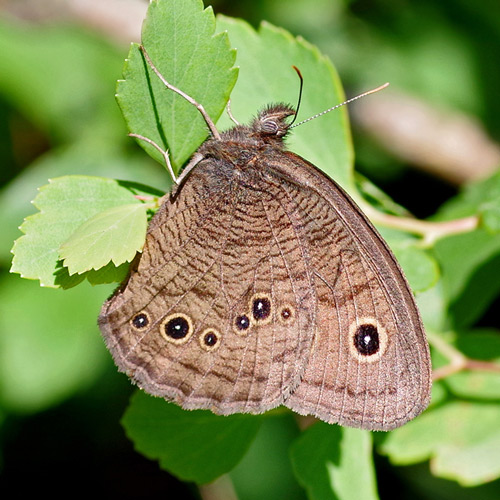 COMMON WOOD NYMPHS emerge in early July and fly around the grasslands into September. We can’t appreciate their nuanced coloration as they pass (there’s some variation by clicking here, and clicking here), but they really are monochromatic marvels, painted with shadow and texture. 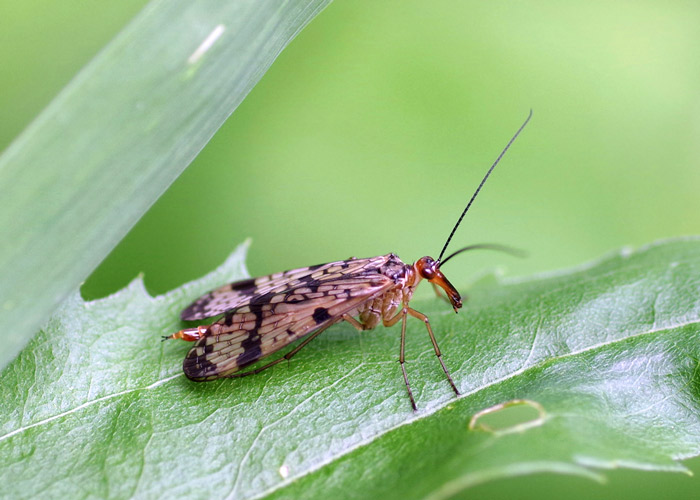 SCORPIONFLIES are not in the fly order Diptera but in the order Mecoptera and the family Panorpidae. The BugLady often finds these jumpy little insects on leaves that have bird poop on them – they are mostly scavengers that feed on droppings and dead/dying animal matter (they’ll even rob spider webs) as well as pollen and nectar. This is a CSI bug – they will visit corpses, and their presence indicates that the body is fresh. Both ends are interesting – the face has a conspicuous elongation called a rostrum, and although the males’ reproductive structures look like a scorpion’s tail, they’re harmless. For more information, click here to learn more. 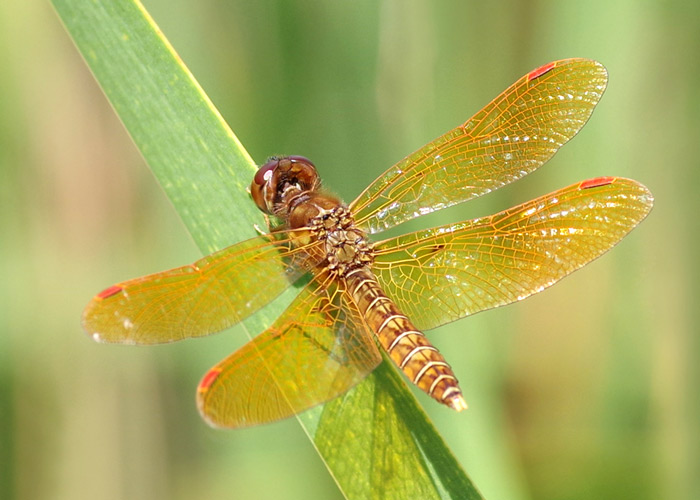 At just under an inch in length, EASTERN AMBERWINGS are the smallest commonly-occurring dragonfly in Wisconsin (there are scattered populations of the even-smaller Elfin Skimmer, click here to learn more). Many of our damselflies are longer, but they are far slimmer than the amberwing. The BugLady finds it extraordinarily easy to take out-of-focus shots of amberwings. 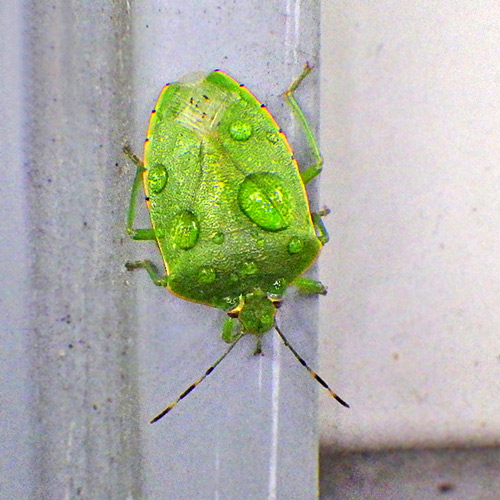 GREEN STINK BUG: Note that the BugLady said that this is an “almost bugless” season. Every year at about this time, the BugLady is visited by some insect, usually a mosquito, that should have been dead weeks ago. Oh, the BugLady gets that the small, cold-tolerant Chironomid midges will dance in the air deep into fall, but it’s been snowy and extra-cold around here, folks, since the beginning of November (a week ago, right after the BugLady’s alarm went off, the TV weather guy announced that it was 3 degrees out. She reacted appropriately). So where had this Green stink bug, photographed outside the front door on November 27, been hanging out? Or the spectacular Herald moth (click here to learn more) that landed near her computer on November 23? Or the crane fly that she found on December 12 in the sink? Or the spider whose web descended from the conifers to her windshield wiper on the balmy (37 degree) morning of December 21? A Christmas Mystery.

Best Wishes for the New Year.